“I’ve been smiling all the way to the bank,” pistachio farmer John Dean said at a conference hosted earlier this month by Paramount Farms, the world’s largest almond and pistachio processor. Paramount is owned by Stewart Resnick, a Beverly Hills billionaire known for his sprawling agricultural holdings, controversial water dealings and millions of dollars in campaign contributions to California politicians.

The record drought, now entering its fourth year in California, has alarmed the public, left some rural communities without drinking water and led Gov. Jerry Brown last week to impose the first mandatory water restrictions in the state’s history. But the governor’s executive order required cutbacks only from the urban sector that uses roughly 20 percent of California’s developed water; the agricultural sector, which uses 80 percent, was required only to formulate “plans” for coping with future drought.

Responding to criticism about letting agriculture off easy, Brown and his aides pointed out that farmers have already been cut back. In February, U.S. officials announced that agriculture’s allocation of federal water supplies in California would be cut to zero in 2015. State water allocation to agriculture will be only 20 percent in 2015. And these reductions come on top of earlier cutbacks in 2014.

Yet despite such cutbacks, farmers like Dean and Resnick are enjoying record profits—and increasing the acreage planted in alfalfa, almonds and other notoriously water-intensive crops—thanks in part to infusions of what experts call dangerously underpriced water.

Resnick, whose legendary marketing flair included hiring Stephen Colbert to star in a 2014 Super Bowl commercial, told the conference that pistachios generated an average net return of $3,519 per acre in 2014, based on a record wholesale price of $3.53 a pound. Almonds, an even “thirstier” crop, averaged $1,431 per acre. 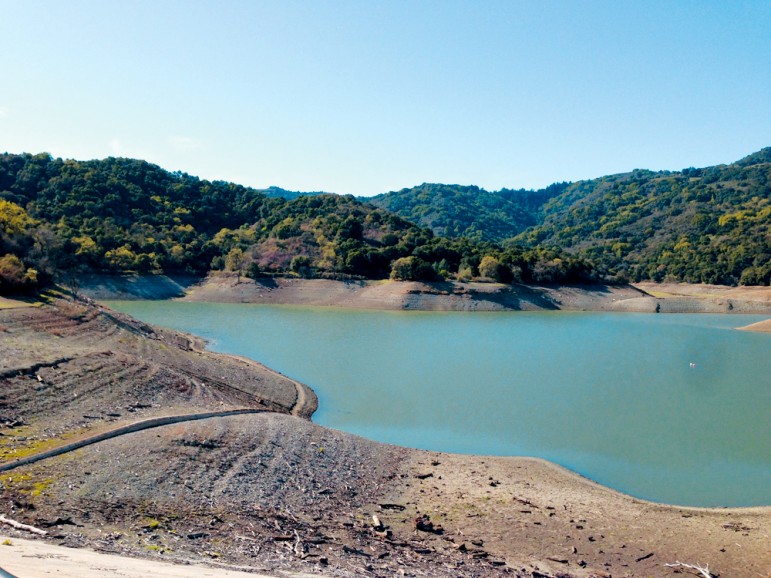 Stevens Creek Reservoir has nearly dried up due to the drought.

Agriculture is the heart of California’s worsening water crisis, and the stakes extend far beyond the state’s borders. Not only is California the world’s eighth largest economy, it is an agricultural superpower. It produces roughly half of all the fruits, nuts and vegetables consumed in the United States—and more than 90 percent of the almonds, tomatoes, strawberries, broccoli and other specialty crops—while exporting vast amounts to China and other overseas customers.

But agriculture consumes a staggering 80 percent of California’s developed water, even as it accounts for only 2 percent of the state’s gross domestic product. Most crops and livestock are produced in the Central Valley, which is, geologically speaking, a desert. The soil is very fertile but can only thrive if massive irrigation water is applied.

Until recently, agriculture’s 80 percent share of state water consumption has rarely been mentioned in most political and media discussions of California’s drought. Instead, coverage concentrates on the drought’s implications for people in cities and suburbs, which is where most journalists and their audiences live. Thus, recent headlines warned that state regulators have ordered that restaurants serve water only if customers explicitly request it and homeowners water lawns no more than twice a week. The San Jose Mercury News pointed out that these restrictions carry no enforcement mechanisms, but what makes them a sideshow is simple math: During a historic drought, surely the sector that’s responsible for 80 percent of water consumption—agriculture—should be the focus of public attention and policy.

The other great unmentionable of California’s water crisis is that water is still priced more cheaply than it should be, which encourages over-consumption. “Water in California is still relatively inexpensive,” Heather Cooley, director of the water program at the world-renowned Pacific Institute in Oakland, told me.

One reason is that much of the state’s water is provided by federal and state agencies at prices that taxpayers subsidize. A second factor that encourages waste is the “use it or lose it” feature in California’s arcane system of water rights. Under current rules, if a property owner does not use all the water to which he is legally entitled, he relinquishes his future rights to the unused water, which may then get allocated to the next farmer in line.

Lawmakers have begun, gingerly, to reform the water system, but experts say there remains far to go. For years, California was the only state in the arid West that set no limits on how much groundwater a property owner could extract from a private well. Thus nearly everyone and their neighbors in the Central Valley have been drilling deeper and deeper wells in recent years, seeking to offset reductions in state and federal water deliveries. This agricultural version of an arms race not only favors big corporate enterprises over smaller farmers, it threatens to collapse the aquifers whose groundwater is keeping California alive during this drought and will be needed to endure future droughts.

Last fall, the legislature passed and Gov. Brown signed a bill to regulate groundwater extraction. But the political touchiness of the issue—agricultural interests lobbied hard against it—resulted in a leisurely implementation timetable. Not until 2040 or beyond will sustainable practices be in place.

There are practical solutions to California’s drought, but the lack of realistic water prices and other incentives has slowed their adoption. A shift to more efficient irrigation methods could reduce agricultural water use by 22 percent, an amount equivalent to all the surface water Central Valley farmers lacked due to drought last year, according to an analysis that Cooley co-authored with Robert Wilkinson, a professor at the University of California Santa Barbara and Kate Poole, a senior attorney at the Natural Resources Defense Council. 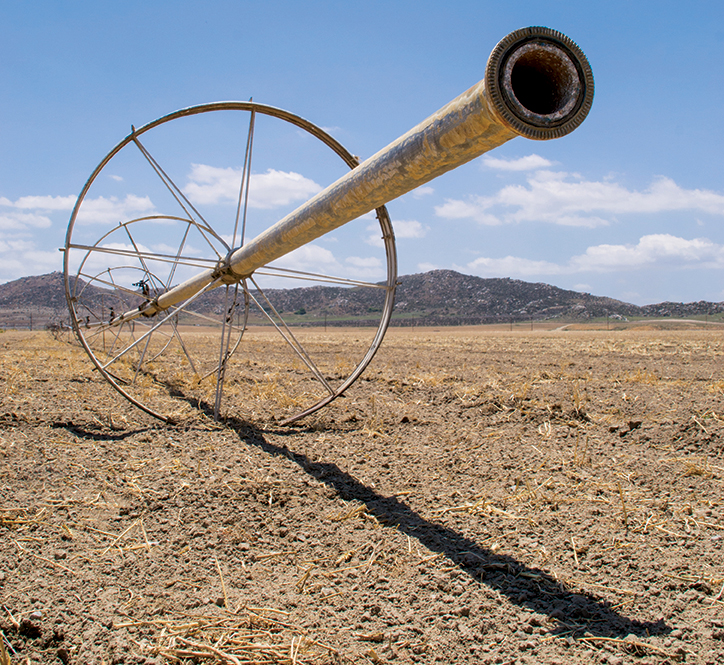 While nut exports help the balance of trade, the use of groundwater could put the state at risk for future droughts.

The Brown administration has endorsed better water efficiency—and put a small amount of money where its mouth is. Conservation is the number one priority in the governor’s Water Action Plan, and the drought measures he advanced in 2014 included $10 million to help farmers implement more efficient water management. An additional $10 million was allocated as part of the $1.1 billion drought spending plan Brown and bipartisan legislators unveiled last week. Already more than 50 percent of California’s farmers use drip or micro irrigation, said Steve Lyle, the director of public affairs at the California Department of Food and Agriculture; the new monies will encourage further adoptions.

Nevertheless, underpriced water has enabled expanded production of such water-intensive crops as alfalfa, which is by far the largest user of agricultural water in California—and often is exported to China. Rice, perhaps the thirstiest of major crops, did see its production area decrease by 25 percent in 2014. But pasture grass, which is used to fatten livestock, and many nut and fruit products have seen their acreage increase. Resnick told the Paramount Farms conference that the acreage devoted to pistachios had grown by 118 percent over the last 10 years; for almonds and walnuts the growth rates were 47 and 30 percent, respectively.

One striking aspect of California’s water emergency is how few voices in positions of authority have been willing to state the obvious. To plant increasing amounts of water-intensive crops in a desert would be questionable in the best of times. To continue doing so in the middle of a historic drought, even as scientists warn that climate change will increase the frequency and severity of future droughts, seems nothing less than reckless.

Yet even a politician as gutsy and scientifically informed as Brown tiptoes around such questions. I asked Brown if in this time of record drought California should begin pricing water more realistically and discouraging water-intensive crops. Responding on the governor’s behalf, spokesman Lyle skipped the water-pricing question. On crop choices, he cited a reply Brown recently offered to a similar question: “Growing a walnut or an almond takes water, having a new house with a bunch of toilets and showers takes water. So how do we balance use efficiency with the kind of life that people want in California? …We’re all going to have to pull together.”

“California Has One Year of Water Left, Will You Ration Now?” asked the headline of a widely discussed opinion piece NASA scientist Jay Famiglietti published last month in the Los Angeles Times. The headline overstated the situation somewhat, and editors soon corrected it to clarify that California has one remaining year of stored water, not one year of total water. As Famiglietti was careful to state, California’s reservoirs today contain enough water to supply a year of average consumption. So if California endures a fourth year of drought, the only way to keep household taps and farmers’ irrigation lines flowing will be to summon to the surface still greater volumes of groundwater. But that strategy can’t work forever; worse, the longer it is pursued, the bigger the risk that it collapses aquifers, rendering them irretrievably barren.

California is caught between the lessons of its history and the habits of its political economy. Droughts of 10 years duration and longer have been a recurring feature in the region for thousands of years, yet a modern capitalist economy values a given commodity only as much as the price of that commodity in the marketplace. Current pricing structures enrich a handful of interests, but they are ushering the state as a whole towards a parched and perilous future.

The price of water, however, is not determined by inalterable market forces; it is primarily a function of government policies and the social forces that shape them. Elected officials may dodge the question for now, but the proper price of water seems destined to become an unavoidable issue in California politics.

“As our water supply gets more variable and scarce in the future, we’re going to have to look at how we price water so it gets used more efficiently,” said Cooley of the Pacific Institute. “In some ways we’ve come a long way in California’s water policy and practices over the past 20 years. But if you look into a future of climate change and continued [economic] development, we can and need to do much better.”

This article was adapted from one that originally appeared in The Daily Beast; copyright 2015 Mart Hertsgaard.

Mark Hertsgaard has reported on politics, culture and the environment from more than 20 countries and has authored six books, including HOT:  Living Through the Next Fifty Years on Earth.