State Assembly candidate, Milpitas Councilman and San Jose budget director Armando Gomez has found himself the target of an increasing number of union-funded hit pieces. The mailers—sent out earlier this month by "Opportunity PAC"—paint him as a greedy bureaucrat, having culled a $1.2 million compensation on the taxpayer’s dime while calling for reduced retirement for public workers.

“The city increased [his pension] by more than 150 percent since 2007, bringing his pay and benefits to more than $1.2 million over seven years,” states a mailer paid for by the PAC, which has received $715,000 in the last 13 months from a variety of other independent committees, including PACs for teachers, health care workers and AFSCME.

Only it wasn’t Gomez' pension that increased. It was the cost to the public.

That’s why Gomez, who’s running against four other candidates in the 25th District, supported Mayor Chuck Reed’s pension reforms in the first place. And that $1.2 million? That’s total compensation over a seven-year stretch. 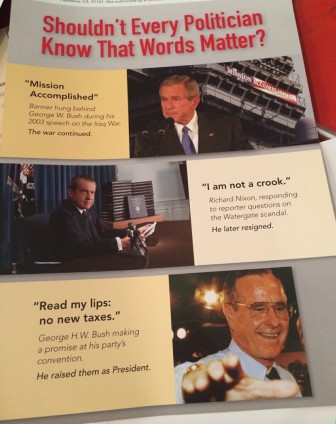 This is one of several attack ads sent out against State Assembly candidate Armando Gomez.

None have been targeted by other committees to the degree of Gomez, who was even compared in one mailer to George H.W. Bush, Bush Jr. and Richard Nixon.

Gomez actually takes home $111,000 a year as one of Reed’s budget directors, a modest salary relative to others in his rank and lower than it once was after a 10 percent pay cut years back.

Correction: A previous version of this post understated the money spent by "Opportunity PAC" in opposition of Armando Gomez. San Jose Inside regrets the error.