Smoke- and ash-filled air has driven away many of the limited customers South Bay businesses had during the coronavirus pandemic, as some companies remain under county orders to operate outside or not at all.

On Monday, business owners, city leaders and faith-based organizations implored the county health department to give them a “fighting chance” to survive the pandemic by allowing indoor operations to resume. The ask comes not only as wildfire smoke has dampened outdoor business, but also as the region braces for the cooler weather that comes with the region’s rainy season.

“You are seeing all of this soot and ash landing on the tables,” Randy Musterer, founder of Sushi Confidential in San Jose and Campbell said. “You're definitely seeing the effect.”

While people are beginning to return slowly, Musterer said the last couple weeks have reminded him of the start of the rainy season as patrons opt to stay home rather than sit outside to eat. He’s eager to be able to serve customers indoors as soon as possible, and said he’s confident he can do it safely.

State officials last week moved Santa Clara County from the highly limiting “Purple Tier” into the less-restrictive “Red Tier” as part of California’s Covid-19 reopening plan. The color-coded system defines what kinds of businesses can be open and with what restrictions. Counties can move through the tiers by increasing testing while the number of people who test positive for the conronavirus decline.

Notably, counties can choose to enact more restrictive rules if local health officials deem it necessary, and Santa Clara County has done that in some areas.

But unlike other Red Tier counties, Santa Clara County opted not to open movie theaters, indoor dining or to allow personal services by manicurists and estheticians to resume indoors. The reason, officials said in a statement Monday, is because some activities—namely those where people are indoors without a mask on—are more risky than others.

“Even though the County’s move into the Red Risk Tier is an improvement, under this tier, the presence of COVID-19 in the County is still ‘substantial,’” county officials said in a statement Monday. “We want restaurants to be able to open for indoor dining as soon as it is safe for the public.” 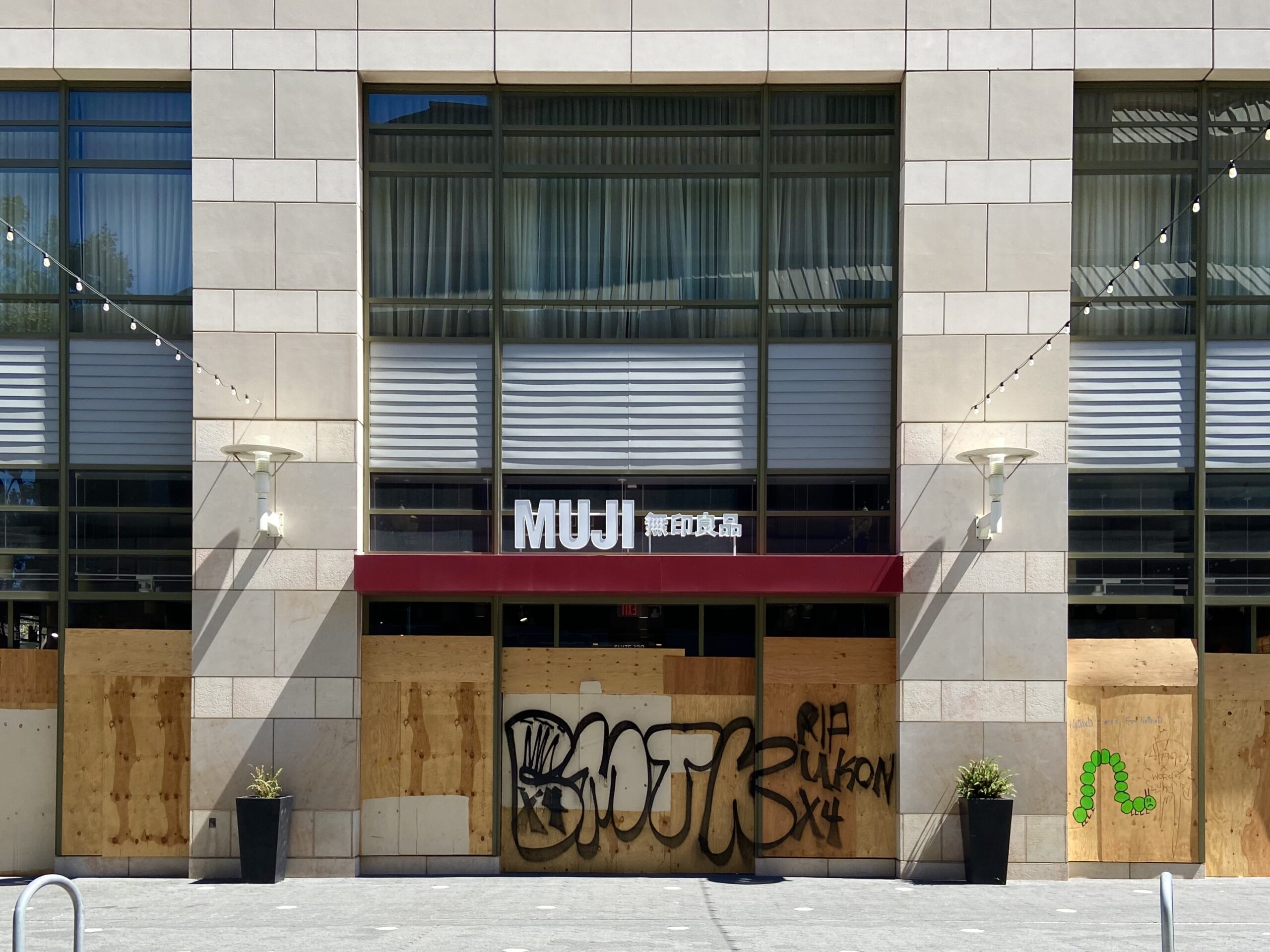 Japanese retailer Muji has permanently shuttered in downtown San Jose, one of many businesses that have closed their doors during the pandemic. (Photo by Janice Bitters)

“There is no evidence to suggest that aesthetician services are any more risky than medical spas,” said Maya Mansour, who owns The Original Facial Bar in San Jose. “We may be the only business that has not been allowed to operate in any way for six months consecutively.”

Gilroy Chamber President and CEO Mark Turner, who is also the co-chair of the Silicon Valley Chamber Coalition, said the county has achieved its early goals of flattening the curve of new cases and preventing the health system from becoming overwhelmed.

The inconsistencies between county and state guidance are a “recipe for disaster,” he added, urging the county to give business leaders a say in reopening decisions while providing a clear guide on what targets need to be hit for establishments to safely reopen.

Gilroy Mayor Roland Velasco said Covid-19 will be present for the long haul, with no guarantee that things will return to normal in the near future.

“We need to learn how to live safely and mitigate the risk, rather than shutting down the economy indefinitely,” he said.

A handful of business owners in San Jose and surrounding cities said they’ve struggled since March, when Santa Clara County became the first in the country to issue a shelter-in-place order and shutter non-essential businesses.

Jacqueline Tran, owner of the Polished Salon in San Jose, said the nail salon industry has already had the sanitation protocols in place, such as face masks and frequent hand-washing, long before they were required in other businesses. She said many workers in nail and hair salons are the sole income-earners of their families.

“This isn’t a question of whether or not they have disposable income to spend, this is a matter of their ability to feed their families or be able to afford their rent to keep a roof over their heads,” she said.

The state framework gives counties credit toward their case rate if they test more people than the California-wide average. Using this calculation, the high number of tests performed in the local area gave Santa Clara County a significant credit, which allowed it to move up to the Red Tier.

The county is offering free Covid-19 diagnostic testing throughout the South Bay, at different locations each day. Some locations require an appointment while others allow residents to walk up and are available for those without symptoms, a doctor’s note and regardless of immigration status.

Residents can find all of the sites and testing days on the county’s website and schedule a test at sccfreetest.org.

In the meantime, county officials say they hope residents will support local restaurants and other businesses, just maybe at a distance for now.

“We urge the public to support our restaurants by using restaurant takeout, delivery options, and outdoor dining,” county officials said in a statement. “Pursuant to the Risk Reduction Health Order, we urge our residents to continue to avoid indoor activities whenever possible to reduce the risk of COVID-19 transmission.”