When Vincent Flesouras was a kid, he was super into science fiction. He read every sci-fi book in his school’s library. It became an outlet for him, a medicine for isolation.

Before long, he also turned to roleplaying board games for some interaction and escapism. “If I could escape into my own world, being poor in rural Arkansas didn’t seem so bad,” Flesouras, now 47, said.

Even now as an engineer at Stanford University, that passion for games and the worlds they provide hasn’t left. He still makes time every week to play games like Pandemic and Cthulhu Wars. The difference now is that since the pandemic shut down many of the country’s other hobbies, the world of fantasy, roleplaying and board games has gotten much bigger and more mainstream.

Locally and nationally, board game and digital game sellers have seen an uptick in sales over the past eight months while people stuck at home turn to the pastime for solace.

Hasbro—which sells the classics like Monopoly, but also strategy and roleplaying games (RPGs) like Magic: The Gathering and Dungeons & Dragons—reported a more than 20 percent increase in board game revenue last quarter.

Now, some game companies are preparing for a big holiday season as free time grows with heightened coronavirus-related restrictions across the country.

But despite the tidy sales numbers nationally, the coronavirus has taken its toll on small, local game shops and their customers, who, before the pandemic, often spent evenings or weekends on-site sipping sodas, trying new games and getting their fill of other people.

Indeed, the rise of gaming isn’t necessarily because people have nothing else to entertain them; it’s also because there is only so much time one can spend on social media or binging Netflix. That’s especially true when the Saturday night craving isn’t just for something to watch, but something to dull the malaise and ennui isolation causes.

Although many South Bay game shops reopened briefly this year, that was short-lived as Santa Clara County returned to the most limiting “Purple Tier” of health safety restrictions this month. As a result, many local game shops are struggling.

“This is not really not the right climate for any kind of social activity and in-store gaming is just that,” said Rachelle Laxson, manager of Santa Clara-based Game Kastle. “This used to be a place where people would just hang out with the cashier for an hour.” 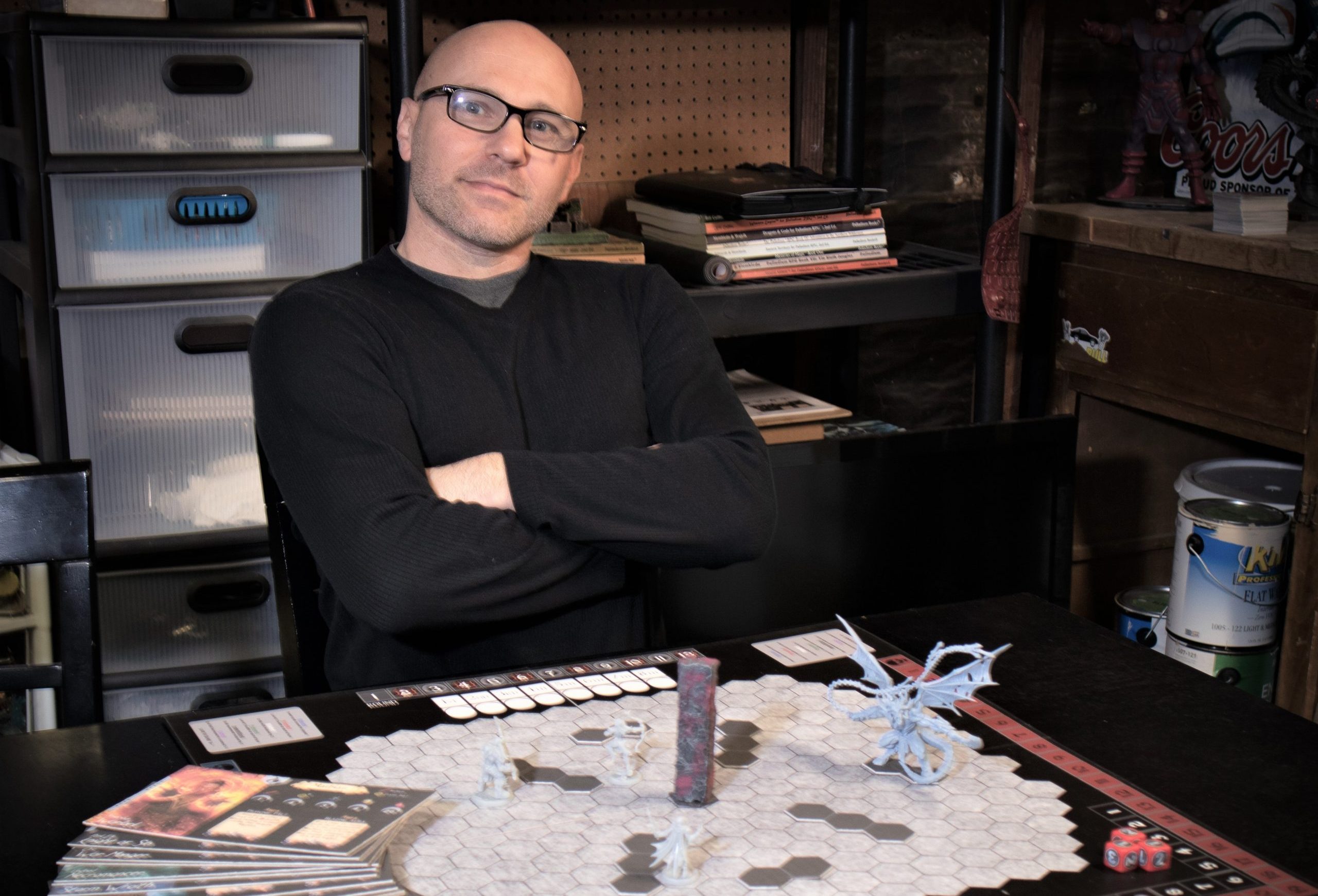 GAMES ON: Chris Marrone displays the board game he created, Chaos Arena, in the garage of his Santa Clara home, converted into a gaming space since the pandemic.

Laxson isn’t sure whether interest in gaming overall has soared, but said sales of certain games—particularly those with a core set of cards and virtually unlimited expansions—have increased. That’s likely because some of those games have elements people can do alone while getting ready to play with others, Laxson guessed. Getting shipments of games to the store, however, has been a “nightmare,” she added.

“This year has beaten a lot out of us; people are just happy to still be playing what they can,” she said. “It has been really hard not to play games with people.”

Anna Warren Cebrian, founder of Santa Clara-based Isle of Gamers, said shifting events to online was touch-and-go. While some board and card games—like Magic: The Gathering—don’t transfer to online play as readily, the Dungeons & Dragons sessions she holds for kids has gone gangbusters. “We suddenly had people with kids at home and a lot of time,” she said. “I know as soon as we open [in-store] gaming again we will be flooded; they are chomping at the bit to come in.”

Many gamers—and those who wouldn’t call themselves gamers—have gravitated to online platforms since March. That was apparent this year when an online mobile game called Among Us, which mimics the gameplay of some roleplaying board games, shot into the nation’s consciousness after being released to little fanfare in 2018.

Who could have guessed that a whodunit game of covertly beheading friends’ colorful, cartoon avatars would be just what 2020 needed?

Other online platforms that offer a digital “tabletop” where friends can virtually gather around to play card-based games have also grown in popularity. Among them: Tabletopia, Board Game Arena, Fantasy Grounds and Roll20.

Her family had always had a game night growing up, so not playing board games wasn’t an option. While playing some of her favorites such as Seven Wonders, Forbidden Island, Sherlock Holmes: Consulting Detective—and, yes, Pandemic—remotely scratched the socialization itch, something is still missing.

“There is only so much ambience you gain from being on a camera,” she said. “You lose some of that tactile experience … a lot of people are starved for things to do.”

Gaming remotely hasn’t been all bad, however. Elliot has played more with friends that have moved away, a habit she sees continuing post-lockdown. “I hope that the pandemic, if nothing else, gets kids into board games and gets that passion to continue to a whole new generation of board gamers,” she said.

Game companies may be hoping for that, too.

One of the bigger names in board gaming, Wizards of the Coast—which is the Hasbro subsidiary behind roleplaying and card game juggernauts Dungeons & Dragons and Magic: The Gathering—launched a whole campaign called “Stay At Home. Play At Home,” to make D&D more accessible for those sheltering in place.

Meanwhile, one local gamer made use of the last eight months in a different way: designing his own game.

Chris Marrone, 41, has hosted a weekly, socially distant, board game night in his garage with friends since the pandemic started. For more than three years, he’s been crafting his own game: Chaos Arena, a tactical gladiator-style game where players control evil characters vying to be champion. Time off work during the pandemic meant more time to focus on his gaming goals, testing the game with his friends.

“Because of Covid, I was actually able to finish it,” he said. “We are going to stay out there and play. I wouldn’t have done that if Covid wasn’t a thing.”

Now the question is whether the local shops will be around to host their own game nights, perhaps one featuring Marrone’s Chaos Arena, at the end of a real-life pandemic.

For Marrone, games’ appeal is simple: they’re a mental workout, a social draw and a small escape from the banality of daily life. For other gamers, like Flesouras, the act of playing is an exercise in good mental health—just like it was as a kid in rural Arkansas.

“To me, you have to treat yourself to something at the end of the day and the end of the week,” Flesouras said. “You make your own fun, because you are stuck at home.”