One of the first to bet big on the sustainability sector was Martin Roscheisen. The inveterate entrepreneur launched Nanosolar in 2002 to make thin-cell solar cells as a cheap alternative to silicon. Thousands of companies followed.

But a decade later, with massive over-investment and price competition from China, California’s green tech bubble had burst. A host of sun-power startups—most visibly, Solyndra—failed spectacularly. Nanosolar, which raised a half-billion dollars in its first five years, shuttered its San Jose factory. Roscheisen set his sights on another industry and ducked into stealth mode.

In November, after three years under the radar, Roscheisen unveiled his latest venture—one that harnesses the power of the sun to a very different effect. Using some of the same technologies to make solar cells, Diamond Foundry puts a Silicon Valley spin on high-end, lab-made diamonds.

Unlike diamond simulants like cubic zirconia, these manmade stones aren’t a knockoff, Roscheisen stresses, but atomically identical to their earth-forged counterparts. He's pitching his diamonds as an ethical alternative to excavated gems and something singular in their own right. 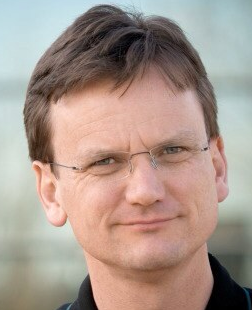 “The diamond industry stood out to us as a very traditional one that needs to see its ‘Tesla moment,’” Roscheisen told Metro. “Before Tesla, electric car meant golf cart. Tesla changed the auto industry forever by first providing a truly viable choice. That’s what we are doing with diamonds—offering a viable choice for the first time.”

The ability to manufacture diamonds has been around for the better part of six decades, though the process remained cost prohibitive until relatively recently. Today, at least 10 companies create retail or industrial diamonds. But Diamond Foundry claims a proprietary breakthrough that makes it faster and cheaper to create gem-quality stones.

“It is very hard to grow pure white, jewelry-grade diamonds,” Roscheisen says. “This is what our technology can do.”

It starts with a “seed,” a thin slice of natural diamond. An 8,000-degree Fahrenheit plasma reactor “grows” the crystal by depositing carbon, layer upon layer. Borrowing this method called chemical vapor deposition from semiconductor manufacturing, the company says it can culture hundreds of diamonds up to nine carats in size in the span of a couple weeks. Some competitors employ variations on vapor deposition, while others use high-pressure techniques, detonating explosives or ultrasound.

The company's highest-profile investor: Leonardo DiCaprio. The actor received an Oscar nomination for playing a gem smuggler in the 2006 film Blood Diamond, which depicts some of the ethical issues plaguing the conventional diamond industry.

“We’re in a strange situation now in terms of diamond economics,” says Shor, who’s spent the last three decades working every level of the trade, from mines to dealers, retailers, research groups and industry media. “Supply exceeds demand. Quantity is going up, quality is going up and prices are going down. It’s really unprecedented.”

It’s too soon to tell what kind of an impact the synthetic sector will have on the overall industry, he says. However, the emphasis on sustainability and “conflict-free” sourcing seems to appeal to a younger generation of consumers. Millennials are less likely to buy a mined diamond, partly over concerns about child labor, regional conflicts and the environmental toll of mining, according to industry reports.

Claims that manmade stones are an ethical alternative can be misleading, though. “It implies that anything else is unethical,” Shor says, “which is not necessarily the case.”

Diamonds only became a fixture in the Western engagement ritual after De Beers trotted out its “diamond is forever” campaign in the 1930s. The slogan and attendant imagery trafficks traditional gender roles, while linking diamonds to emotions of love, envy and expectation—and the somewhat crass notion that a ring should cost someone a few month’s salary.

Once a global cartel, DeBeers has lost some of its luster. In 2011, DeBeers agreed to pay $295 million to American retailers and consumers for alleged price fixing. The company’s market share has steadily shrunk since the monopoly it held up until the 1980s; it now takes up 40 percent of the market. Meanwhile, over-supply has undermined perceptions of rarity.

“Does the ability to create within weeks what the earth takes billions of years to fashion take away from the romance?” Shor says. “That’s a matter of perspective.”

Rather than competing with the traditional diamond sector, lab-grown gems appear to have tapped into a parallel market. Diamond Foundry and its ilk expect to appeal to customers who might not otherwise buy diamonds. Younger consumers seem less sold on their mystique, preferring affordability and sustainability to convention. 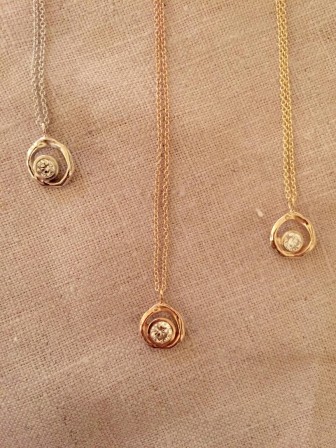 “Diamonds always give me a bit of a laugh,” says Ryan McCarty, a Stanford PhD candidate researching geology and environmental science. “It’s a funny mix of ideas, emotion, marketing and carbon, pairing things like ‘forever’ with a material that is metastable on the earth’s surface, and somehow making it one of the most symbolic and sought-after gemstones.”

Christine Guibara, a Peninsula-based fine jeweler, has noticed that some of her younger clients place more value on a low-carbon footprint than the perceived rarity of a gem.

“It totally depends on whom you talk to,” she says. “Some think that there’s more value in environmental sustainability, ethical mining practices and all that. For those people, they consider a lab-made diamond the only option. But there will always be people who want a natural diamond, too.”

Guibara is among 200 designers who sell through Diamond Foundry’s online marketplace. She hopes having a local diamond supplier will give her a chance to get unconventional cuts.

“A lot of times in the industry, it’s really hard to find something cut in an unusual way,” she says. “The capital is so high, so there’s a tendency to go with what’s already been done. But I think Diamond Foundry has more of a startup mind. It’s exciting to have that.”

As a student of science, Roscheisen also plans to make his high-tech bling available to researchers. For all their mythical associations as fragments of stars, vessels of spirits and tears of the gods, diamonds are incredibly practical. The crystalline carbon may symbolize love, but as the hardest naturally occurring mineral on the planet and viable silicon replacement in semiconductors, he says, they could also make computers a thousand times faster. 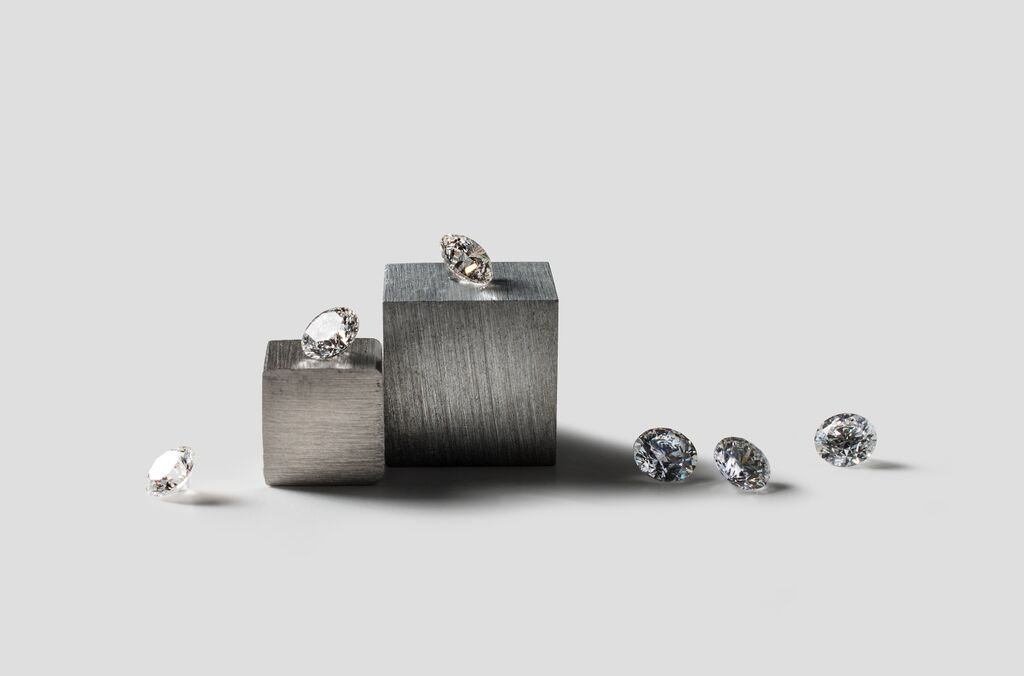 Diamonds created by Diamond Foundry, which cultures the stones in its San Mateo County lab.