Evan Low raised the ante on public service earlier this month, when the state assemblyman and one of his staff members helped rescue two young women from an overturned vehicle.

Driving north on Highway 17 around lunchtime on Aug. 16, Low and Patrick Ahrens spotted a car near the Hamilton Avenue exit that had flipped onto its hood in a dirt patch off the freeway. Low, who represents West Valley’s 28th Assembly District, thought the scene looked a bit “eerie” and wanted to take a closer despite no flames or smoke to suggest an immediate danger. That all changed as they approached the vehicle on foot.

“We saw a girl in the driver seat, with the car flipped over,” Low said. “She had one hand sticking out and she said, ‘help me, help me.’ She was bleeding from the head.”

After pulling the driver from the car, Low said, he and Ahrens were told that her sister was still trapped inside the vehicle.

“I asked if she was OK and she said she was but couldn’t get out,” Low said. “We lifted the car, but there were shards of glass everywhere. So I grabbed my dry cleaning and put it over the glass so she was able to crawl out without being bloodied up.”

Emergency responders arrived a few minutes later, Low said. Bill Murphy, a firefighter and paramedic for the Santa Clara County Fire Department, told San Jose Inside that both individuals involved in the accident were treated at the scene and did not require transportation to the hospital. Low and Ahrens suffered a few cuts from the broken glass but nothing serious.

“I’m not a first responder, so just a minute ago I was planning my calm Sunday afternoon,” Low said. “It’s kind of surreal, to see someone pleading for help and just dropping everything because you feel for the individual, not knowing what the issue might be or any pending danger. It’s just one of those things where you know something is wrong and you want to try to help.” 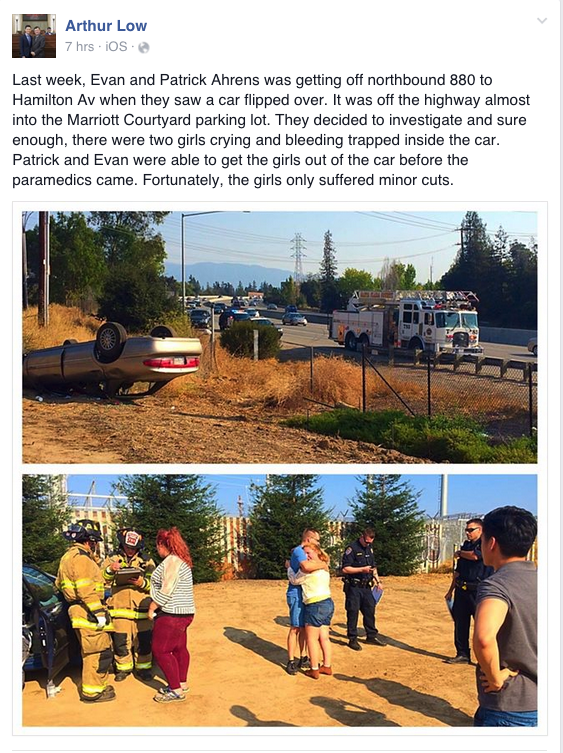