Valley Water has drained Anderson Reservoir in east Morgan Hill until it is almost empty, and will begin seeking bids in January for a contractor to build a massive new discharge tunnel over the next three years.

The efforts are part of the Anderson Dam Seismic Retrofit Project, the construction of which is ultimately expected to last about 10 years, according to Valley Water staff.

As of Dec. 16, Anderson Reservoir is at 3 percent capacity, Valley Water Chief Operating Officer Aaron Baker said at a press conference this past week. The water district began draining the reservoir in October in response to a directive from federal regulators aiming to expedite the dam retrofit project.

The reservoir is now at a low enough level that crews can safely work on new infrastructure for the dam, but high enough to keep a shallow stream flowing through the bottom of the lake and into Coyote Creek for fish and wildlife.

Baker said a large portion of the water drained from Anderson percolated into the local groundwater aquifer as it flowed downstream along Coyote Creek. Much of the water that didn’t percolate underground made it into Valley Water’s treatment plants.

If a large storm later this winter adds more water to Anderson Reservoir, the water district will be required to drain it again to the 3-percent level, Baker said.

Anderson Reservoir is Valley Water’s largest reservoir, with a capacity of about 90,000 acre-feet of water. Without its availability for drinking water storage during the coming decade of construction, Valley Water and local residents will rely more heavily on the district’s “imported water” sources from other parts of the state, Baker added.

Construction of the new discharge tunnel is expected to begin in the spring—after Valley Water has approved a contractor through a bid process, Valley Water Deputy Operating Officer Chris Hakes said. The tunnel will serve as a major upgrade to the discharge pipeline that currently drains from the reservoir into Coyote Creek.

The new tunnel—which will be buried under the new dam and span up to 24 feet wide—will allow the reservoir to discharge up to 2,000 cubic feet per second (cfs) into the creek. The existing pipe—which will remain operational after the retrofit is completed—only allows up to 500 cfs. Construction of the new tunnel is expected to last about three years.

After that, Valley Water will begin disassembling the existing earthen dam and rebuild it bigger and sturdier. That portion of the project is expected to last until about 2031. Then, Valley Water will be able to allow Anderson Reservoir to return to its full capacity for the first time since the existing dam was deemed seismically unsound in 2009.

The dam retrofit project will entail removing all “liquefiable material” from the existing dam, then reconstructing the core as well as upstream and downstream embankments, Valley Water staff explained.

The Anderson Dam Seismic Retrofit project includes the construction of a new spillway in accordance with new federal standards.

All recreation and public access to the dam and reservoir have been closed since October, and will remain that way throughout the duration of the 10-year retrofit project.

The total cost of the tunnel and retrofit project is about $576 million.

In 2009, state authorities determined that the dam would not withstand a major earthquake, and the crest of the dam could slump in such an event—leaving Morgan Hill underwater within minutes.

Upon further study, the local water district determined that the interior of the earthen dam could liquefy in the event of a significant earthquake on the Calaveras fault, which is about 1.2 miles from Anderson Dam. Since 2009, as a precaution the reservoir level has been maintained below 60 percent of the reservoir’s capacity—except during occasional storms that produced heavy rainfall.

Valley Water District 1 Director John Varela noted that on Dec. 15, district staff conducted “routine checks” of the dam following two small earthquakes on the Calaveras fault in Morgan Hill. The district’s inspections did not find any damage from the tremors.

Photos below show Anderson Reservoir at various stages of draining in recent months. The bottom photo from Dec. 14 shows the reservoir at its current level of 3 percent. 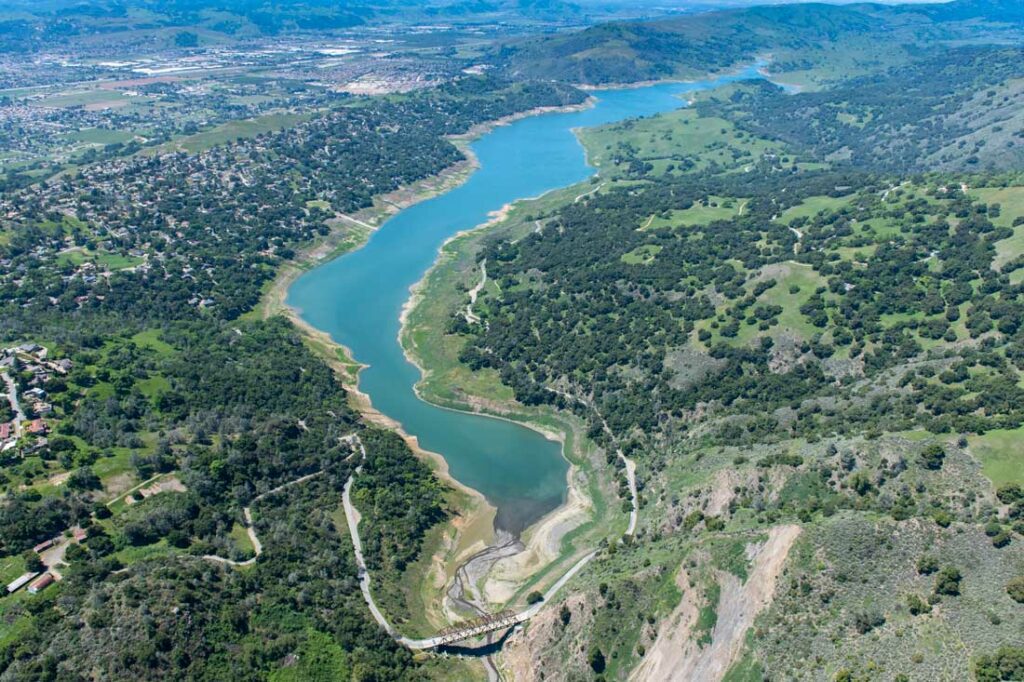 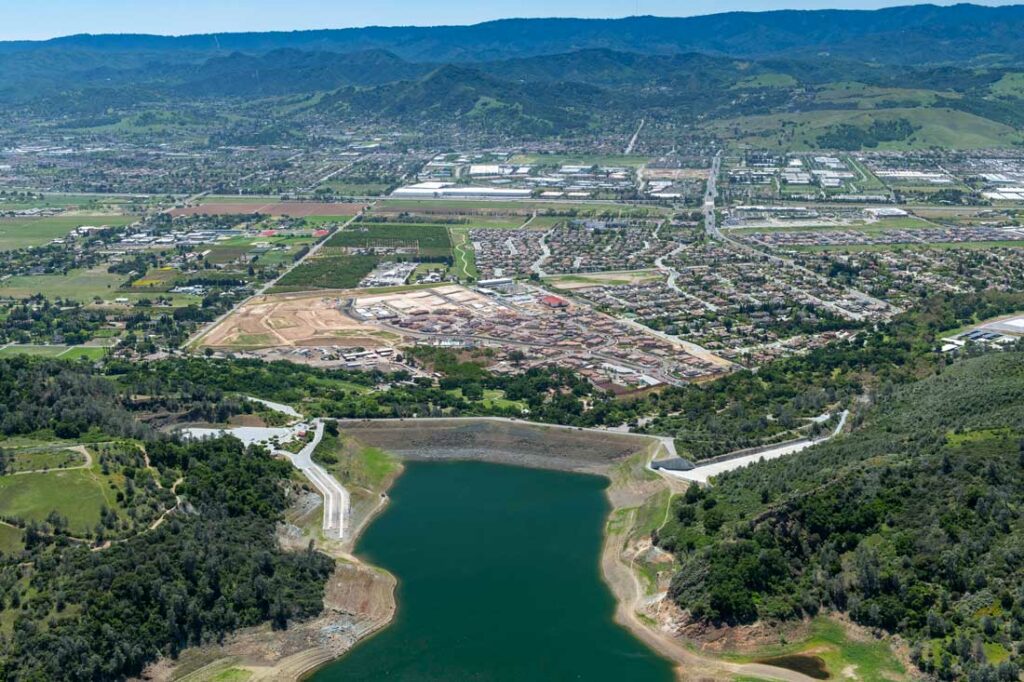 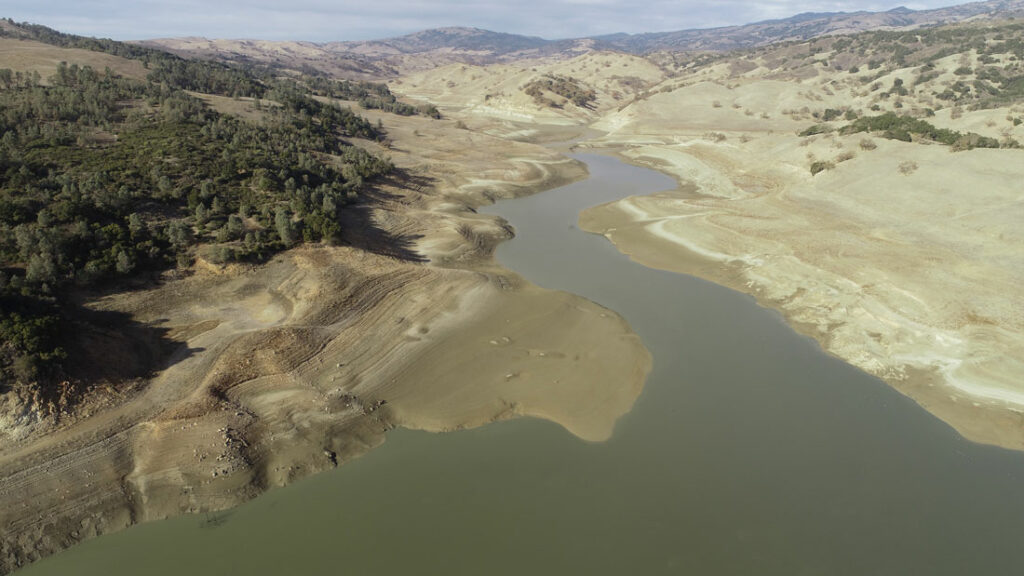 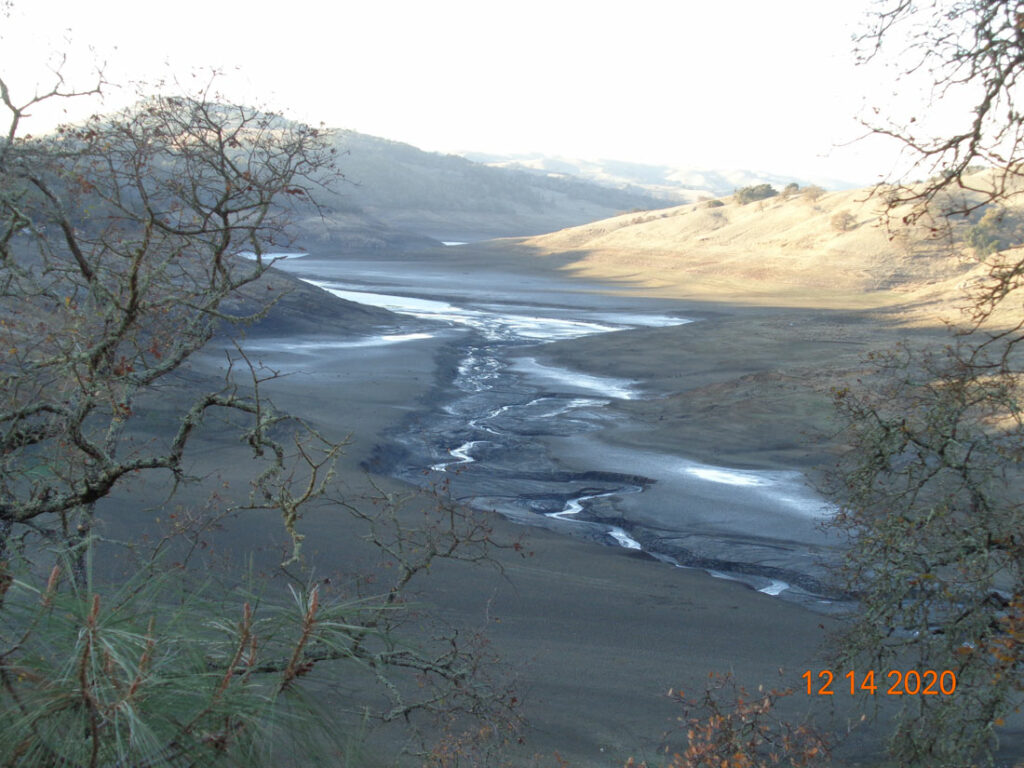