While cities debate the merits of equipping police officers with body cameras, the public has trained an eye on cops with cameras of their own. As evidenced by videos of police encounters in Staten Island, which led to the killing of Eric Garner, and Baltimore, which ended in Freddie Gray’s death, smartphones have become primary sources in documenting police interactions.

Just last weekend, a bystander recorded a group of San Jose police officers whaling on a 22-year-old man in San Jose’s East Side. The police department said the suspect, Juan Moreno-Lopez, was acting suspiciously and ran from officers. The department also said Moreno-Lopez attempted to the fight officers. Once taken down, he was said to act combative and resist arrest. Video of his arrest shows two officers holding Moreno-Lopez down on the ground before several more officers descend upon him and begin to punch and hit him with a baton. A taser was also also reportedly used.

It didn't take long for the footage to go viral, and the incident is now under internal review.

Almost a year ago, in July 2014, another bystander recorded San Jose police slamming a man to the ground and pummeling him with batons. Twenty-three-year-old Nate Howard, who was never charged, filed an excessive force complaint after the incident, which happened hours after he spoke at the San Jose State University Black Graduation ceremony. He cited cellphone footage, which also went viral, as evidence.

Prompted by the national conversation about use of force by police—particularly against African-American men—the American Civil Liberties Union has developed an app enabling users to record and upload footage of police for attorneys to review for due-process violations. Last week, the civil rights group launched its “Mobile Justice” app in California.

The app, available in both English and Spanish, includes a “witness” feature that alerts users if someone reported an incident nearby. There’s a red “record” button, an option to file a report and a menu that runs down a list of rights with advice about how to comport oneself in event of a police encounter. There’s also an option to automatically lock the phone screen once it starts recording, so nobody tampers with or erases the video.

“The [app] puts the power to ensure transparency in the hands of the people,” says Hector Villagra of the ACLU. “With so many people carrying cellphones with cameras, the whole world could be watching with just a touch of the phone’s screen.”

Reports of police brutality have remained relatively consistent, according to the Bureau of Justice Statistics, though they have become more visible with the proliferation of images and videos posted on social media. While it's unclear how effective cellphone videos can be in holding police accountable for their behavior, they have certainly provoked a national conversation. 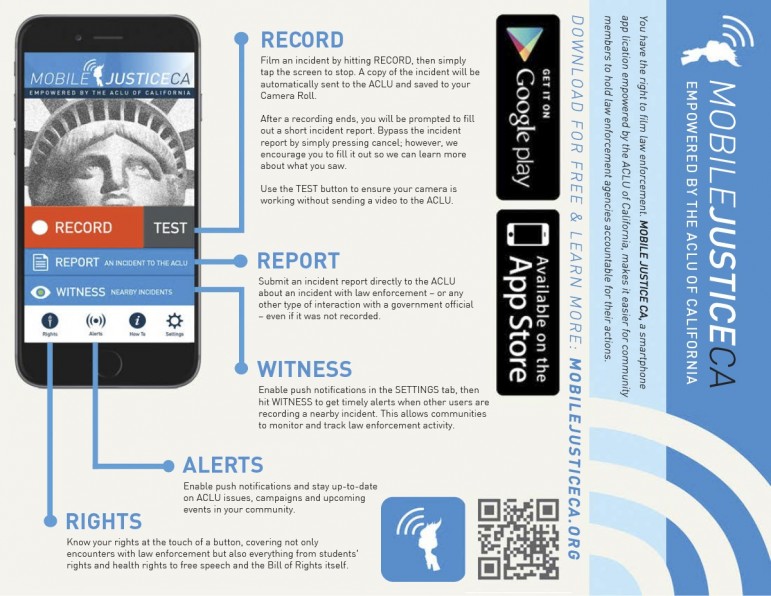