The deadline came and went for pot purveyors to submit plans for opening up shop in Mountain View, where officials decided to cap the market at two storefronts and as many delivery ventures. While 10 applied, just four will make the cut.

Unlike Hayward, which set a low bar for applicants and was thus bombarded with proposals, Mountain View required prospective cannabis retailers to run background checks and secure properties before making a pitch.

City officials also told them to brace for the cost of doing business in one of the most heavily regulated industries in California, one that would ring up $100,000 or more in municipal fees alone, and one of the most expensive real estate markets in the nation.

The result? A field of viable contenders, including heavyweights MedMen and Caliva.

“This is a serious business, so you need serious people and serious applicants,” said Sean Kali-Rai, head of the Silicon Valley Cannabis Alliance, a regional chamber of commerce for the weed sector. “Mountain View created this process that got rid of all the folks with grandiose ideas but no real qualifications, no real follow-through.”

The city of 82,000 will pick the lucky two retailers by lottery in the coming month. Since only a couple businesses applied for delivery permits—namely Grown and Caliva—the outcome for them is a foregone conclusion. 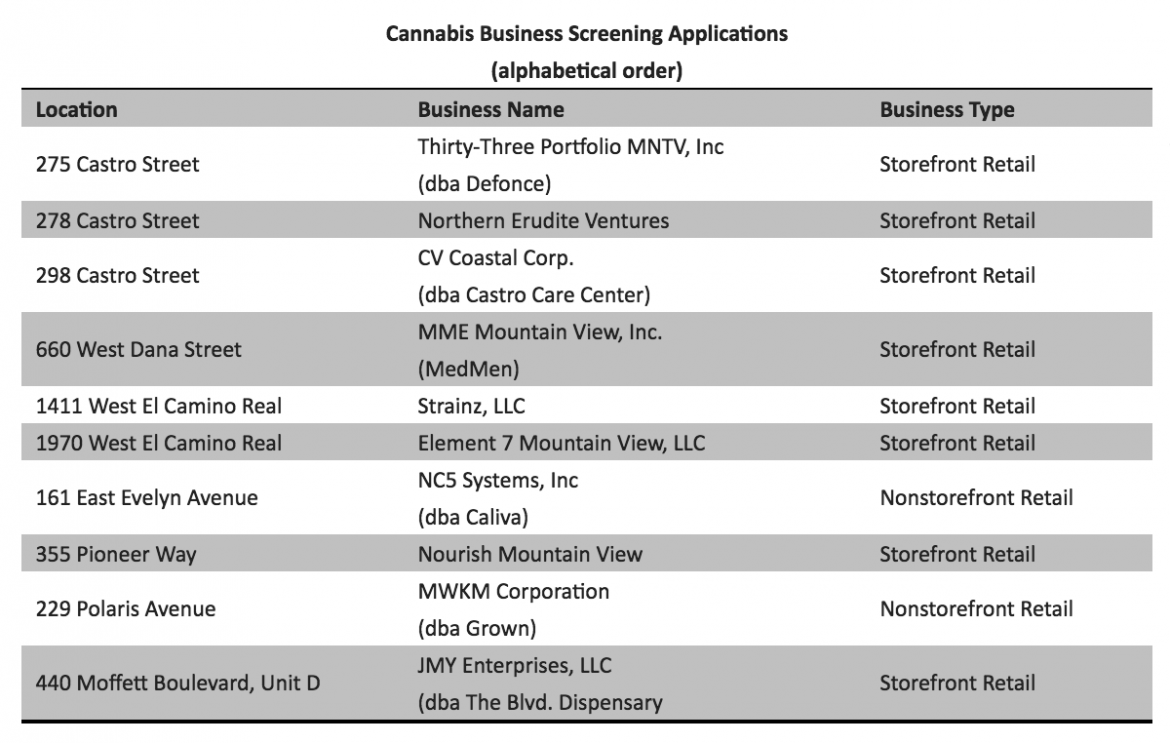 Mountain View’s City Council voted 5-2 last fall to authorize commercial cannabis just a month before residents passed a 9 percent tax measure on local pot sales. A few of the five council members in favor of adopting a citywide regulatory framework—the since-termed-out Ken Rosenberg among them—said they interpreted the results of Prop. 64, which two-thirds of Mountain View voters supported in 2016, as a mandate to clear the way for broader legalization.

The October council vote made sizable swaths of the city eligible for cannabis-related conditional use permits. Downtown, the San Antonio Shopping Center and long stretches of El Camino Real all became fair game under the new rules.

However, because it’s so difficult to find landlords willing to do business with people working in a realm considered illegal in the eyes of the feds, most of the applicants proposed locating in and around the same vicinity. Property owners open to working with cannabis entrepreneurs tend to own their parcels outright and, given the legal risks inherent to the industry, tend to charge well above market rate.

Thus, three of the eight potential pot retailers courting business in Mountain View listed addresses on the same old-town strip on the 200 block of Castro Street. Another listed a location about two blocks away on West Dana Street.

Kali-Rai said he expects the finalists—whoever they are—to be up and running before the end of the year. That would make Mountain View just the second city in Santa Clara County to open its doors to the budding pot sector.

San Jose, which was once inundated with more than 100 rogue pot clubs, led the way toward legalization by licensing 16 of them a few years ago. The county and every other city in the region resisted the statewide trend by outlawing commercial pot sales.

But it seems the tide is turning in the South Bay, with Morgan Hill, Campbell and Santa Clara each now plotting a course toward local legalization. Meanwhile, San Jose is getting ready to accept applications for cannabis manufacturing startups come March 1.