Mike Honda has a huge problem. The ethics investigation into the eight-term congressman continues, and details released in hundreds of documents Thursday suggest his staff viewed official business as a commodity to be sold in exchange for campaign support. There’s also the issue of House staff routinely doing campaign work on taxpayer time.

The congressman may have no choice but to burn through campaign dollars for top-notch attorneys to make an embarrassing defense: The congressman shouldn't be blamed for any violations because there was a lack of institutional control.

The arguments his lawyers make in response to the Office of Congressional Ethics (OCE) report is that even if something bad did happen, Honda had no clue. His chief of staff, Jennifer Van der Heide, and longtime district director, Meri Maben, had a much harder time making that argument. But that’s why Honda’s campaign is also paying their attorney fees.

We’ve combed through the all of the documents and here are some of the biggest findings:

According to notes from the event provided to the OCE, the cranes project was not only mentioned as an idea of MH (i.e. Mike Honda), but that it “also will likely be transactional—i.e. help me with this visa for my grandma.” The notes add: “Donors are not going to be interested in the public affairs or the federal gov policy.”

Heystek told investigators that “there was no effort to create a transactional relationship with donors,” but the unedited retreat notes suggest exactly the opposite: “Lamar is here to try out this MH idea, even after the election for this to work, it will require MH to use his personal touch. [U]nlike a nonprofit, folks are not going to ante up every year because they believe in the cause.”

2. In her duties as Honda’s district director, Meri Maben, now with the Silicon Valley Education Foundation, helped one of the San Jose Sharks’ owners resolve an issue with acquiring a visa. The person requesting help on the owner’s behalf turned out to be none other than former San Jose Mayor Tom McEnery.

After helping McEnery, Maben tried to parlay that official work into campaign contributions. In an email to Honda’s fundraising consultant, Maben wrote: “I know we’ve tried with them before to no avail but once again we’ve responded to Tom’s request. Please ask Tom to come to birthday event and bring Sharks people. Woman below appears to be one of the owners.”

3. Some of Honda’s staffers recognized in the moment that House rules were being broken. In a private chat between two staff members, one employee notes that Mark Nakamoto is making campaign calls in the district office. The note recognizes such activity is “so illegal.”

4. The 2012 district retreat, which is considered part of official House work, included conversations about doing greater outreach to the Chinese community to specifically assist the campaign. Heystek, Honda’s former campaign coordinator, admitted to the OCE: “The district office doing Chinese language outreach was mentioned in the context of a campaign and votes.”

5. Multiple members of Honda’s House staff told OCE investigators that there was an expectation to work on the campaign, which again violates House rules. Workers should volunteer for such duties. One unidentified female staffer said that Jennifer Van der Heide, the chief of staff, was “usually the driver of these conversations and was pretty proactive in trying to get us engaged in that way.”

The staffer said that had she declined, “... I think that would have probably meant, though, that I needed to find a new job after that.”

6. Staffers were instructed to read a book by Ro Khanna, who lost a close race to Honda in 2014 and is challenging him again in 2016. Van Der Heide wrote an email with the subject line, “Required Reading, Entrepreneurial National by Ro Khanna.” She later told investigators that she was being “facetious” and no one was required to read the book, despite repeating those exact words in the body of the email.

A staffer disagreed with the chief of staff’s suggestion it was a joke. “I considered it part of my duties as someone that was working for Congressman Honda,” she said. 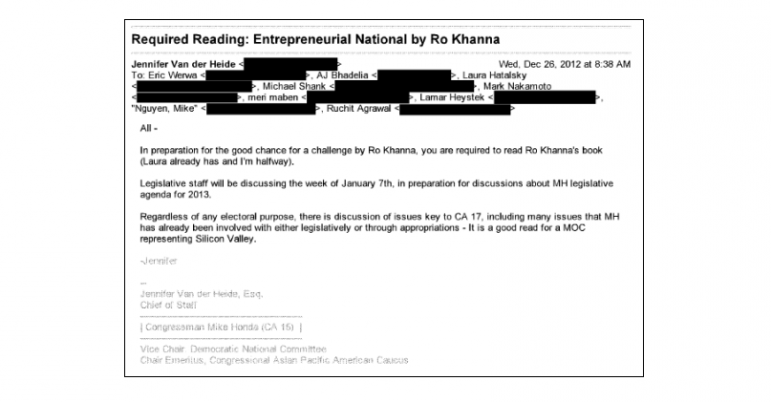 7. The email that really started all of this was a message from Van der Heide to Heystek, which linked invites to an official State Department Event to asking for campaign contributions. Ven der Heide wrote: “Great list. How are we doing outreach to them for $?”

An OCE investigator asked her, “What did you mean when you wrote that letter or wrote that line?”

8. Honda told investigators that retreats are “all official” business. When shown notes from Heystek’s presentation in 2012, as well as notes from an October 2013 retreat presentation from then-campaign manager Doug Greven, Honda admits improper coordination “did occur, I guess.” The OCE report has notes from Greven’s presentation that says policy will lead to district work, which is then parlayed into raising money for the campaign.

9. The OCE recommended the House Committee on Ethics, which is carrying out the rest of the investigation, issue a subpoena for Doug Greven. Honda’s campaign manager for 2014 declined a request to meet with investigators, but he'll be under oath if compelled to testify. What he has to say could be the nail in the coffin.

10. Honda is going to have a huge hurdle in not only overcoming the damning details in the OCE report, but also convincing people to support him in the race to come. His challenger, Khanna, has apparently lined up a few new endorsements in San Jose Mayor Sam Liccardo, District Attorney Jeff Rosen and County Assessor Larry Stone.