Thanksgiving affords us a little more free time, thankfully. If only so many of us didn't waste that time on the vapid commercialism that latches onto the holiday season like a money-sucking parasite. But rather than getting pulled into the chaos that is Black Friday, here's a list of suggestions on how to give back a little during the four-day weekend. More opportunities can be found on volunteermatch.org.

For decades, the late Louise Benson, the "Mother Teresa of San Jose," would feed the hungry and clothe the poor out of her Willow Glen home. She would set up tables in her garage and hand out peanut butter-and-jelly sandwiches to anyone who showed up. Two charities stemmed from her efforts: Sacred Heart Community Service and Martha's Kitchen, "the little soup kitchen" that grew into a year-round event that feeds as many as 300 people a meal. Kevin Patterson, the kitchen's operations manager, says he has plenty of help already this week, but he needs volunteers to chip in next Tuesday and Wednesday (along with donations of canned ham). Print out and fill out a form from marthas-kitchen.org and turn it in just before a shift. Meals are served from 6:30-11am and from 3:30-5:30pm on Tuesdays and Wednesdays every week, year-round, at 311 Willow St., San Jose. For more info, call 408.293.6111.

Community Meal at The Jungle

People living in San Jose's largest homeless encampment, The Jungle, are running out of time. The city aims to shut the place down next month and move its 200-plus residents into permanent housing. But as that date approaches, homeless advocates fear that deadline is unrealistic. This Friday, various community groups will meet at the roadside camp to host a Thanksgiving dinner with residents, offering them warm food and temporary reprieve. Unlike past meals, where people stand in line for a plate then take it to their own tent, this one will be a community event. "We want people to eat together, we want to engage people," says Robert Aguirre, who lives at The Jungle and has become a de facto spokesman for the unsheltered community. Aguirre encourages folks to bring their Thanksgiving leftovers to feed the homeless, but also to take a moment to socialize with them. The impending closure of the encampment means hundreds of people need help moving (which is why clothing donations are discouraged for now). It would help if people with pickups and vans exchanged information with Jungle residents and coordinate a time to help them move when the day comes. Feedings will take place at 1:30pm and 2:30pm Friday at The Jungle, at Keyes Street and Senter Road, across from Happy Hollow Zoo in San Jose. For information, call Aguirre at 915.571.8674.

For more than three decades, the Billy DeFrank LGBT community center has changed and saved lives. It's offered shelter to runaway teens, provided health services and counseling to people in need and become a constant, reliable source of community. Show them your gratitude by stopping by with a homemade dish for the organization's annual Thanksgiving meal, which takes place from 11am to 3pm at the center, 938 The Alameda, San Jose. Two days later, at 6pm Saturday, the center will host its annual Transgender Day of Remembrance, which includes a memorial open mic and candlelight vigil, to honor the lives of people killed because of transphobia. For details, call 408.293.3040.

As housing costs demand a greater share of the monthly paycheck for Silicon Valley's poorest residents, food pantries have had to step up fundraising and donation efforts. Second Harvest Food Bank, which serves Santa Clara and San Mateo counties, feeds 250,000 people a month—most of them children or elderly—making it one of the largest food pantries in the nation. While they have enough volunteers for the coming weeks, Second Harvest always needs a hand to stay afloat. Monetary donations help the nonprofit pay for its fleet of trucks, overhead costs and, of course, food. As for food donations, they always need protein-packed items like peanut butter, canned meats and canned stews. For details, call Caitlin Kerk, 408.858.9028.

Fed up with the materialism of the holidays, Councilman Ash Kalra began organizing a holiday food and clothing drive. The event, which he calls the Holiday Warm-Up, is going on its fifth year this season. Instead of waiting in some forever-long line outside of Best Buy like a sorry sap, Kalra invites volunteers to spend the busiest shopping day of the year making sandwiches, packing lunches and donating winter clothes to the homeless. You can meet with him or gather a group to participate on your own. The event starts at 9:30am Friday at 96 Rooster Ct. in San Jose. 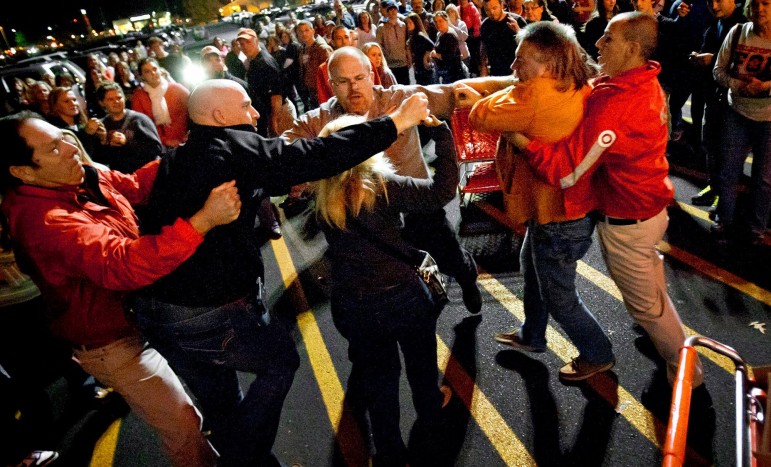 In case you need some reinforcement, look at these people. (Look at them!) Do yourself a favor and avoid the Black Friday madness. If you really can't resist, check out these local small businesses. (Photo via YouTube)