Workers today are subject to more monitoring and tracking on the job — often without their knowledge — than ever before, advocates say.

Various productivity applications, often on workers’ smartphones or other devices, track and predict delivery drivers’ and warehouse workers’ every move, collecting data on their location, speed, and accuracy in finishing orders, according to a study by UC Berkeley’s Labor Center. 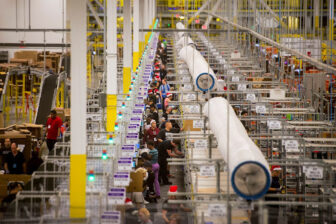 Meanwhile some employers install software on remote workers’ computers to log their keystrokes, monitor their internet activity, or take screenshots at any moment – even turning on webcams to monitor them. If workers refuse to be tracked they are risking their jobs, advocates say.

Assemblymember Ash Kalra, a San Jose Democrat, proposed a bill Monday that he said would ensure workers gain some protection from off-duty employer surveillance and retaliation.

The Workplace Technology Accountability Act, or AB 1651, would create a set of privacy standards for employer workplace monitoring tools. The bill was reviewed Wednesday in the Assembly’s Committee on Labor and Employment.

It would require employers to give workers advance notice and explain how, when and why monitoring technology is being used on the job. It would prohibit employers from monitoring workers off duty or on their personal devices, and it would allow workers to view and correct data about them.

It also would ban the use of facial recognition technology, and it would stop employers from using algorithms to decide when and if an employee is to be disciplined or fired.

Kalra said low-income workers of color often bear the brunt of workplace surveillance. Nationally, four out of 10 frontline workers are people of color, according to the Center for Economic and Policy Research in Washington D.C..

“Here in California with the Black and Latino workforce …  they’re the ones that are being asked to take on the burden of keeping our economy moving,” Kalra said.

“And yet they also, at the same time, are being asked more and more to be under surveillance and to be under the control in many ways (by) technologies that are designed to squeeze out every single ounce of productivity from them, without giving them the empowerment to have much say in their work environment.”

At the national level, exemptions in the Electronic Communications Privacy Act of 1986 gave employers the right to spy on workers’ written and verbal communications.

In recent years the market for workplace surveillance technology has exploded, especially during the pandemic.

Coworker.org, a tech worker advocacy nonprofit, released a report last year on the rise of workplace surveillance tech. It found nearly a third of the more than 550 new workplace tech products and companies it cataloged were created in the last two years.

Similarly a 2021 UC Berkeley Labor Center report showed workers across various industries – including retail, hospitality, construction and healthcare  –  were subject to increased surveillance with little oversight from the government.

“It’s really kind of the wild west out there, and employers are pretty free to do whatever they want with predictably negative effects on workers,” said Mitch Steiger, a legislative advocate for the California Labor Federation.

He said monitoring has become routine in workplaces and unfair use of algorithms and productivity tracking increasingly are tied to disciplinary actions, often leading to physical injuries for workers.

Last month, the state of Washington’s Department of Labor & Industries fined Amazon $60,000, noting that there was a “direct connection” between workers’ joint and muscle disorders and the company’s use of employee monitoring and discipline systems.

Work included hours of repetitive lifting and twisting at a fulfillment center in Kent, Wash. The department said Amazon’s productivity tracking technology forced workers to overextend themselves to meet quotas with little time to recover without penalty.

An Amazon spokesperson said the company disagrees with the findings and plans to appeal the citation.

Kalra and other advocates say his bill is not anti-tech. Rather it’s an attempt to restore workers’ rights to privacy — at work and outside their jobs.

Steve Smith, communications director at the California Labor Federation, said currently “workers have absolutely no ability to fight back, to even raise concerns about the invasion of privacy this creates. Low wage workers are front and center here in terms of who we’re trying to protect with this bill.”

The number of workers being surveilled in California remains unknown, because there is no requirement that employers report this information.

“The fact that we’re not able to identify how common these technologies are, or how they’re impacting workers is actually a very telling symptom of the problem,” said Annette Bernhardt, director of the Technology and Work Program at UC Berkeley’s Labor Center.

“These systems are literally a black box to both workers and policy makers, and also to researchers.”

AB 1651 would force employers and vendors to be transparent about these systems by requiring them to conduct “impact assessments”  about any algorithmic or worker tracking systems prior to use  and submit those reports to the Labor and Workforce Development Agency for review.

In addition, the state’s Labor Commissioner would create an advisory committee by next March to recommend  the best — and least harmful — uses of data-driven tech in the workplace.

Workers would be able to file claims with the agency and bring a civil action against employers that violate the bill’s standards.

Kalra’s bill is supported by unions, but he says he expects some pushback from conservatives in the legislature, business lobby groups and from vendors of workplace productivity and surveillance products.

The California Chamber of Commerce has been in touch with the California Labor Federation about the bill but has yet to see the final proposal, said Ronak Daylami, a privacy policy advocate for the business group.

“However, as the pandemic has adapted how we all work, new technologies have developed to help both employees and employers operate in a more flexible and efficient way,” she wrote in an email. “We want to ensure that we do not stifle this innovation as our economy continues its recovery.”

If the bill were successful, it would be one of the far reaching pieces of worker surveillance legislation in the country, supporters said.

Next month New York will join Connecticut and Delaware in merely requiring employers to disclose electronic monitoring to their workers. The New York law will apply to workers hired on or after May 7. None of the laws enacted in those states give workers the right to review and correct data created about them.

Kalra’s bill is part of a number of efforts across the state to boost protections for workers and curb the use of facial recognition technology, which studies show disproportionately discriminates against women and people of color.

“There is no question in my mind that these technologies are rapidly becoming the backbone of how employers are organizing work and production,” said Bernhardt. “So we need to ask ourselves whether these technologies will be used to benefit workers and help them thrive in their jobs or whether they will be used to intensify work loads and rob workers of their autonomy and dignity?”

Last year Newsom signed AB 701 into law. The measure, which had Kalra’s support, now requires warehouse employers to disclose productivity quotas and work speed data to workers, and it bars any quota that penalizes workers for taking breaks or using the bathroom.