Sacramento is preparing for a showdown over how far the state should go in regulating social media companies that many blame for contributing to a national youth mental health crisis.

At the center of the controversy is a first-in-the-nation bill co-authored by Republican Assemblymember Jordan Cunningham of San Luis Obispo and Democratic Assemblymember Buffy Wicks of Oakland that, in its original form, would have allowed California parents to sue large social media companies for harms caused by addicting kids to their products. 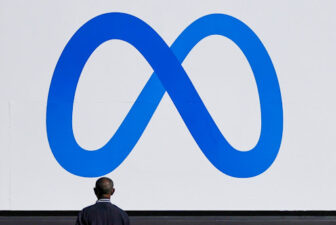 A man stands in front of a sign of Meta, the parent company of Facebook and Instagram, at its headquarters in Menlo Park last October. Photo by Carlos Barria, Reuters

But, following ardent opposition from the tech industry and concerns from both Republican and Democratic lawmakers, that clause was removed. Under amendments made public on June 30 — the day before the Legislature embarked on a month-long summer recess — only public prosecutors, such as the state attorney general and county district attorneys, would have the power to bring civil lawsuits against social media giants for deploying designs or features they know will addict kids.

Cunningham told me Wednesday that he doesn’t feel the proposal, which he described as “the most important bill I’ve ever worked on,” has been watered down.

If prosecutors “were to prevail in court, the court would issue a statewide injunction barring any company from deploying product feature XYZ, whatever it may be,” he said. “That doesn’t seem like a weakened bill to me, it seems like a different way to skin the cat.”

But TechNet, a powerful lobbying firm that counts among its members Meta, the parent company of Facebook and Instagram, would prefer that the cat doesn’t get skinned at all.

Dylan Hoffman, TechNet’s executive director for California, said Wednesday that the group plans “to pursue every legislative avenue to try to stop the bill.”

“We really don’t think that California should be joining the likes of Texas and Florida in trying to regulate online speech in this manner,” Hoffman said, noting that the bill would allow public prosecutors to sue social media companies over any feature they deem addictive, such as algorithms, push notifications, newsfeeds and continuous scrolling.

That could signal a tough road for Cunningham’s proposal, given what he described as the sizable influence of “tech’s armada of lobbyists.”

Cunningham said he’s “cautiously optimistic” the amended version of the bill will make its way to the governor’s desk and be signed into law. But, he said, “you really never know.”

The bill’s next hearing is set for Aug. 1, the day state lawmakers return to Sacramento.

Note: This item has been updated to reflect that TechNet does not include TikTok among its member companies.

Emily Hoeven is a reporter with CalMatters.