San Jose Inside will expand its news coverage to cover more topics in the coming months. This week we roll out our new Sports section.—Editor

At the highest echelon of hockey, bodies are made to be broken over the course of a grueling season. Veterans know this all too well, as the nicks of an 82-game season and the scars that accumulate across the span of a career serve as reminders of the passage of time, and the relativity of youth in a profession predominated by ever-younger physical specimens.

As a 19-year-old breaking into the National Hockey League, the injury bug couldn’t have been further from the mind of Tomas Hertl. In just his third career game with the San Jose Sharks, the hulking yet fresh-faced rookie from the Czech Republic put the league on tilt with a magisterial four-goal game against the visiting New York Rangers. The ear-to-ear grin he had that night, after slipping the fourth and final puck through the goalie’s legs, was nearly wide enough to rip a hole in the ice.

But even the best rookies—and perhaps, especially the best rookies—come to learn that the game is unkind, for in fact it’s a job that every opponent would gladly knock one’s teeth out to protect. The more praise a player receives, the more they become a target. A little more than two months after Hertl’s coming out party on Oct. 8, 2013, a clash of knees resulted in him tearing two ligaments in his right leg. He made it back for the playoffs but was far from the player who notched 15 goals and 10 assists in the first third of the season. Since that time, Hertl has experienced a roller-coaster of a career, returning to form as a spark plug performer on the way to a Stanley Cup appearance in 2016 to once again seeing his body betray him with a broken foot and second knee injury.

“After the first year, I always get the question: How is the knee?” says Hertl, noticeably ice bag-free after a training camp session in San Jose. “All the time it's the same question. It's not a positive thing. I'd be more happy talking about scoring goals. But things happen and now I just need to focus and show this will be the best season of my five years here.”

That five years have already passed is remarkable. Hertl, who came to San Jose without knowing a lick of English, still has the look of a teenager who’s proud of his newfound ability to grow stubble. In fact, the 23-year-old vet is staring down what could be a make-or-break season. 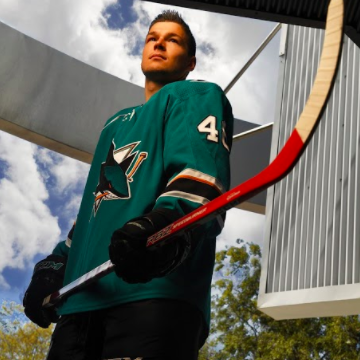 With the departure of Sharks legend Patrick Marleau to the Toronto Maple Leafs, and likely Hall of Fame forwards Joe Thornton and Joe Pavelski not getting any younger, the door has swung open for Hertl to assume a leadership role in the forward rotation. And yet, his contract expires next summer, meaning the team could just as easily move on if they feel Hertl is unable to stay healthy and fill the scoring void.

“Pattie is a great guy, you know—probably the best Shark in history,” says Hertl, declining to put a number on his individual scoring goals. “Nobody will be like him. He made it like 20 years.”

Eighteen to be exact, but for those keeping score, that’s exactly how old Hertl was five years ago when he joined the team. There’s a restlessness to the way he describes his outlook for the season, which begins Oct. 4 against the Philadelphia Flyers. He has accomplished things no other Sharks player has, but he remains far from meeting his own expectations.

“If you look around the NHL, others teams have young guys who are taking leadership and winning games,” Hertl says. “I want to be the guy who gets put in the last minute, when the coach needs a goal.”

The mental toughness to come back from injuries resilient and hungry is something Hertl developed back in his childhood in Prague, where he competed against the friends of his brother, Jaroslov, who is four years older and now plays professional hockey overseas.

Did he take some beatings?

“Sometimes,” he says, allowing a brief smile, “but it just made me work harder to be better. I think it helped me a little bit. And I like [mixing it up], because I know I'm a big guy, too. I’ve got a big [6-foot-2, 215] body. I don't mind when someone hits me, because I like to hit people, too. That's my game—a power forward.”

And that, it seems, is the mantra Hertl and the Sharks take in their quest for the elusive quest for Lord Stanley’s cup: to power forward. The window may be nearing an end for the talented Pavelski and the soft-handed but insanely tough Thornton, who played through a torn ACL and MCL during last year’s playoffs, but a plan is clearly in place. Alongside talents such as Logan Couture, Brent Burns and Marc-Edouard Vlasic, a player like Hertl represents hope for the future. That future simply needs to start now.