As the sun slowly set behind the rotunda at San Jose City Hall, gold lights filled the large dome as San Jose State students celebrated their reward for their activism in raising awareness for pediatric cancer.

Students of San Jose State filed a resolution that was passed on Tuesday this week declaring March as Pediatric Cancer Awareness Month in the city of San Jose. A day later, students and community members gathered outside city hall to take part in the commencement ceremony.

Joining in the celebration was 8-year-old Campbell native Ramon Soto. Soto is a pediatric cancer survivor turned activist who spoke to the crowd gathered to kick off the start of Pediatric Cancer Awareness Month. 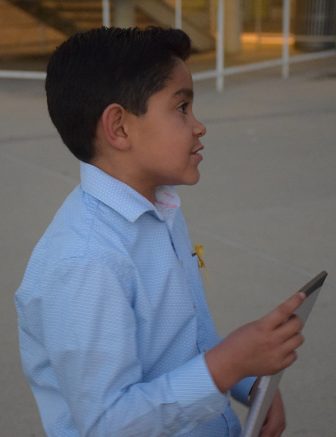 “I had leukemia,” Soto said in his speech. “It was super scary. But because of research and lots of shots, I’m here with you.”

When Soto was 16 months old, his mother took him to the doctor for a fever. Within weeks Soto was diagnosed with leukemia.

“It all started with a fever,”  Soto’s mother Leslie Soto said. “[Soto] had a fever that wouldn’t go away. It was scary, but it brought our family closer together.”

The students at San Jose State have been working in partnership with the youth-led, non-profit organization, With Purpose. With Purpose was founded by Erin Benson and Mike Lee after the couple lost their two-year-old son, Sam, to brain cancer.

"With Purpose works with students and youth to show the power of our voices and that there are things we can do, actions we can take to make a difference," said Jasmine Garcia, a student of San Jose State and a member of SJSU With Purpose who helped pass the proclamation.

SJSU With Purpose is the group of students advocating for pediatric cancer this month and will be having two more events that are open to the public. The first is an SJSU baseball game where SJSU student and pediatric cancer survivor, Alyssa McCoy will throw out the first pitch.

The second event is a pediatric cancer informational panel that includes Soto, Lucielle Packard oncologist Kara Davis and Patricia Brown from the American Cancer Society. The event will be held from 5 to 6:30pm on March 14 in the SJSU ballroom. Refreshments will be served. To learn more visit the SJSU With Purpose website.

Andrea Chavez is a San Jose State student. Opinions are the author’s own and do not necessarily reflect those of San Jose Inside.