In Metro’s March 2012 cover story, “The Sam and Dave Show,” we predicted a race between two products of elite schools and connected families. Now, after seeing Big Business, Big Developers, Big Media, Big Labor and Big Political Party Machine anoint their candidates—before a single regular person’s vote was cast—it sure looks like the fix was in. 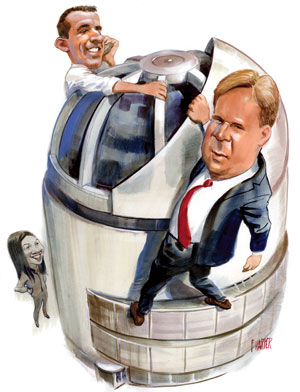 We think San Jose citizens should reject the buying of the mayorship by special interests. And the best way to say no to Putin-style election-rigging is to vote for one of the candidates who haven’t hocked themselves wholesale to the usual suspects.

The smartest of the nonaligned is fiscally-conservative/socially progressive Pierluigi Oliverio, who has crafted a campaign around rejecting the institutional endorsements that he wasn’t likely to get anyway. His grasp of policy issues is far enough ahead of the pack it sometimes makes him a bit of a lone wolf.

Displaying independence along with enough emotional intelligence to be an effective organizer is Madison Nguyen. The city’s vice mayor has been battle-tested and shown the courage that leadership requires. San Jose’s next mayor will need to make tough decisions, and we believe Nguyen would continue to bring common sense and balance to the dais. Her rise from humble roots to the city’s No. 2 spot speaks to her achievements, and she is uniquely equipped to give voice to the demographic winds transforming California.

San Jose’s next mayor will need to make tough decisions, and we believe Nguyen would continue to bring common sense and balance to the dais.

Sam Liccardo has displayed a sincere interest in forging an urban vision marked by bicycle lanes, mass transit, trendy pop-up stores, sidewalk cafes and high-rise residential buildings. His enthusiasm for clamping down on nightclubs, cannabis collectives, bikini bars and sidewalk bicyclists, however, betrays a bias for idealism over pragmatism. We’re not sure if the city should return to the days when City Hall planned all the projects and wielded a heavy enforcement baton. If Liccardo makes the runoff, we’d like to see him balance his top-down vision with street smarts.

Dave Cortese has called for a “new direction,” but that sounds more like a return to the Alice in Wonderland-style economics that nearly bankrupted San Jose. He failed to speak up against corrupt colleagues and must overcome his willingness to play along before he earns his leadership stripes.

Our hope is that the November election will be something other than an oversimplified punchcard polarized by two classes of organized economic interests. Given the large field, there’s no assurance how that ballot will shake out, but we think Madison Nguyen represents the best shot at having a runoff candidate with loyalties to constituents rather than powerful lobbies with lots of money.

That’s why we’re supporting her in the June primary.