KYIV, Ukraine — They met in high school but became a couple years later, after meeting again on a dance floor at a Ukrainian nightclub. Married in 2001, they lived in a bedroom community outside Kyiv, in an apartment with their two children and their dogs, Benz and Cake. She was an accountant and he was a computer programmer.

Serhiy and Tetiana Perebyinis owned a Chevrolet minivan. They shared a country home with friends, and Perebyinis was a dedicated gardener and an avid skier. She had just returned from a ski trip to Georgia.

And then, late last month, Russia invaded Ukraine, and the fighting quickly moved toward Kyiv. It wasn’t long before artillery shells were crashing into their neighborhood. One night, a shell hit their building, prompting Perebyinis and the children to move to the basement. Finally, with her husband away in eastern Ukraine tending to his ailing mother,  Perebyinis decided it was time to take her children and run.

They didn’t make it. Perebyinis, 43, and her two children, Mykyta, 18, and Alisa, 9, along with a church volunteer who was helping them, Anatoly Berezhnyi, 26, were killed March 6 as they dashed across the concrete remnants of a damaged bridge in their town of Irpin, trying to evacuate to Kyiv. 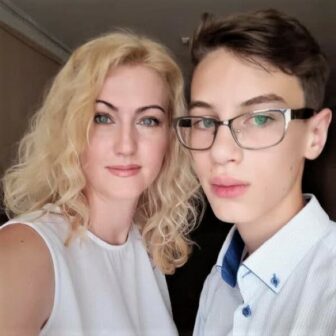 Tetiana Perebyinis, and her son, Mykyta.
Photo submitted to the New York Times by Serhiy Perebyinis.

Their luggage — a blue roller suitcase, a gray suitcase and some backpacks — was scattered near their bodies, along with a green carrying case for a small dog that was barking.

They were four people among the many who tried to cross that bridge last weekend, but their deaths resonated far beyond their Ukrainian suburb. A photograph of the family and Berezhnyi lying bloodied and motionless, taken by a New York Times photographer, Lynsey Addario, encapsulates the indiscriminate slaughter by an invading Russian army that has increasingly targeted heavily populated civilian areas.

The deaths stirred international outrage and a pledge from Ukrainian President Volodymyr Zelenskyy to punish the perpetrators. “There will be no quiet place on Earth for you,” Zelenskyy said. “Except for the grave.”

Perebyinis’ employer, SE Ranking, a software company with offices in Palo Alto, Calif., and London, had encouraged employees to leave Ukraine immediately once the fighting started. The company had even rented rooms for them in Poland, Serhiy Perebyinis said. But his wife delayed her departure because of uncertainty over how to evacuate her mother, who has Alzheimer’s disease.

The family’s lives and their final hours were described in an interview by Perebyinis and a godmother, Polina Nedava. Perebyinis, also 43, said he learned of the death of his family on Twitter, from posts by Ukrainians. 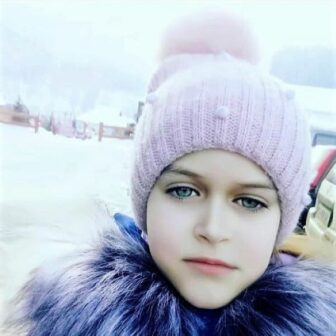 Alisa Perebyinis, 9, killed by a Russian mortar attack near Kyiv.
Photo submitted to the NY Times by Serhiy Perebyinis.

Breaking down in tears for the only time in the interview, Perebyinis said he told his wife the night before she died that he was sorry he wasn’t with her.

“I told her, ‘Forgive me that I couldn’t defend you,’” he said. “I tried to care for one person, and it meant I cannot protect you.”

After she didn’t, he said he felt it was important that their deaths had been recorded in photographs and video. “The whole world should know what is happening here,” he said.

The Perebyinis family had already been displaced once by war, in 2014, when they were living in Donetsk in the east and Russia fomented a separatist uprising. They moved to Kyiv to escape the fighting and started rebuilding their lives. When Russian tanks rolled into Ukraine last month, they could hardly believe it was happening again, Perebyinis said. 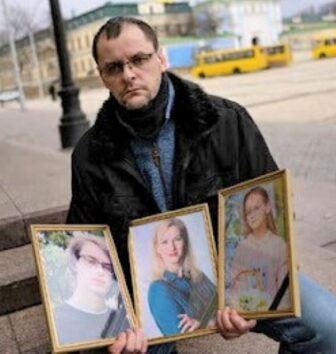 Serhiy Perebyinis lost his wife, Tetiana, and both of their children to Russian mortar shelling near Kyiv..
Photo by Linnsey Adario for the NY Times.

A colleague at work, Anastasia Avetysian, said SE Ranking had provided emergency funds for employees to evacuate and that Perebyinis, as the chief accountant in Ukraine, had been busy in her final days disbursing them.

“We were all in touch with her,”  Avetysian said in a telephone interview. “Even when she was hiding in the basement, she was optimistic and joking in our group chat that the company would now need to do a special operation to get them out, like ‘Saving Private Ryan.’”

But behind the jokes was a period of waiting and intense worrying, Perebyinis said. His son, Mykyta, started sleeping during the day and staying up all night, keeping a vigil over his mother and sister. When there were sounds of fighting, he woke them up and all three would move into a corridor, away from the windows. “My son was under a lot of stress,”  Perebyinis said.

Last Saturday, after two days in the basement, they made a first attempt at evacuating. But as they were packing up their minivan, a tank rolled by on the street outside. They decided to wait.

The next day they were up and moving by about 7am. Tetiana Perebyinis had discussed the plan in minute detail with her husband. She and her two children and her mother and father, who lived nearby, would join a church group and try to evacuate toward Kyiv, and then get somewhere safe from there.

They drove as far as they could in Irpin, but then Perebyinis was forced to abandon the minivan. They set out on foot toward a damaged bridge over the Irpin River.

To escape, they were forced to cross a hundred yards or so of exposed street on one side of the bridge. As Russian forces fired into the area, many tried to seek cover behind a brick wall.

He saw their luggage

Berezhnyis, the church volunteer, who had earlier evacuated his own family but had returned to help others, was with Perebyinis and her children when they began to dash toward the other side.

Through the night, Perebyinis had tried to monitor his wife’s location using a locator app on their phones. But it showed nothing: the family was in a basement, without cell reception.

Around dawn, he said, he saw one ping, showing them at their home address. But nothing showed them moving. Cellphone coverage had become too spotty in the town.

The next ping of a location on Perebyinis’ phone came around 10 Sunday morning. It was at Clinical Hospital No. 7 in Kyiv. Something had gone wrong.

He called his wife’s number. It was ringing, but nobody answered. He called his children’s phone numbers, with the same result.

A half-hour or so later, he saw a post on Twitter saying a family had been killed in a mortar strike on the evacuation route out of Irpin. A short time later, another Twitter post appeared, with a picture. “I recognized the luggage and that is how I knew,” he said.

When the mortar shell hit, the family and   Berezhnyi were about 12 yards away from the crater left by the mortar. They had no chance. The explosion sent out a spray of hundreds of jagged, metallic shrapnel shards. Their bodies slumped onto the muddy street beside a monument to World War II dead from Irpin. A plaque on the monument read: “Eternal memory to those who fell for the fatherland in the Great Patriotic War.”

Perebyinis’s parents were behind the mother and children and were unharmed. They are now staying with  Nedava, the godmother. The following day, a snowstorm blew over Kyiv. The suitcases, one of which had been knocked open by the explosion or later opened by passers-by, lay covered in snow on the street beside blood stains. It held only clothes: a pink child’s tank top, sweatpants, yellow and blue child-size socks, apparently for Alisa.

When asked to describe his wife, Perebyinis slumped in his chair.  Nedava offered that she had a “light” spirit, was often joking and cheered up a room.

Over their long marriage, Perebyinis added, “We refurbished three apartments and never argued once.”

Berezhnyi had moved his wife to western Ukraine but had returned to Irpin to help with the evacuation organized by his church, the Irpin Bible Church, the pastor, Mykola Romaniuk, said in a telephone interview.

When the mortar strike began, with shells landing first a few hundred yards away, Romaniuk said other church volunteers saw Berezhnyi run to help Perebyinis. “He took her suitcase and they started running,” he said.

Berezhnyi, Pastor Romaniuk said, was quiet and generous. “He was the kind of friend who is ready to help with no words needed,” he said. “I do not know how God can forgive such crimes.”

In mid-February, before the war started, Perebyinis had traveled to his hometown, Donetsk, in rebel-held eastern Ukraine, to care for his mother, who was sick with Covid-19. After hostilities began, the crossing point closed and Perebyinis was trapped in the East.

To return to Kyiv from separatist-controlled eastern Ukraine after the death of his family,   Perebyinis traveled into Russia and flew to the city of Kaliningrad, to cross a land border into Poland. At the Russia-Poland border, he said, Russian guards questioned him, took his fingerprints and seemed ready to arrest him for unclear reasons, though he was eventually allowed to travel on.

He said he told them: “My whole family died in what you call a special operation and we call a war. You can do what you want with me. I have nothing left to lose.’’

“We are devastated to say that yesterday our dear colleague and friend Tatiana Perebeinis, the chief accountant of SE Ranking, was killed together with her two kids by Russian mortar artillery,” the company wrote on Facebook on Monday.

Tatiana’s husband, who was not with them as they tried to flee, shared photos of his wife and children on his Facebook page.

The Russians “took them all,” he wrote on Facebook.

The company, which develops tools for search engine optimization, was founded in 2013 by natives of Belarus. CEO Valery Kurilov, who is one of the founders, lives in Ukraine, according to the San Francisco Chronicle, which reported that many U.S. tech companies have a presence in Ukraine, which is known for a strong education system with an emphasis on technology skills.

“There are no words to describe our grief or to mend our pain,” SE Ranking wrote in its post. “But for us, it is crucial to not let Tania and her kids Alise and Nikita remain just statistics. Her family became the victim of the unprovoked fire on civilians, which under any law is a crime against humanity.”

Serhiy Perebyinis wrote on Facebook that at least one of the dogs, a Yorkshire terrier, survived, although its leg was amputated.

“Hoping for his strength,” he wrote. “He is a tough guy. Thanks to all those who care. Thanks to the journalist who showed humanity.”

Andrew E. Kramer is a reporter for the New York Times, based in Moscow. Maria Varenikova contributed reporting to the Times story from Lviv, Ukraine. Copyright, The New York Times.