San Jose could quadruple its business tax revenue under a reform initiative slated for the fall ballot, a new study has found. But not everyone agrees it will work.

A proposed gross receipts business tax would rake in about $40 million more annually than the city’s existing 30-year-old model, which pulls about $12.7 million a year, according to the analysis by city-hired firm Keyser Marston.

Most businesses would remain unaffected by the new tax, and some high-earning companies would pay more under the plan—predominantly those with 501 or more full-time employees.

“This ill-conceived proposal would push San Jose’s business tax exponentially higher than our neighboring Santa Clara County cities with whom we compete,” Liccardo said in a prepared statement Monday. “It’s unfortunate that the proponents would cut-and-paste a tax system crafted specifically for San Francisco when San Jose faces a far different economic landscape.”

“We attempted to write an ordinance that would do as much good as possible with the least amount of harm,” he said. “From our perspective, the independent study confirms what we set out to do: create a tax that would not hit most businesses and ask the largest corporations to pay their fair share of taxes.”

The tax measure would levy companies making upward of $1 million a year a 60-cent, 90-cent or $1.20 tax for every $1,000 they make. About 87 percent of San Jose companies would pay the same or even less, according to the study. Some 12 percent would pay more, with an average increase of $6,000.

Some companies with fewer than 10 employees and yearly revenues of more than $1 million would pay about four times more in taxes, Liccardo pointed out, echoing objections by the San Jose Silicon Valley Chamber of Commerce. 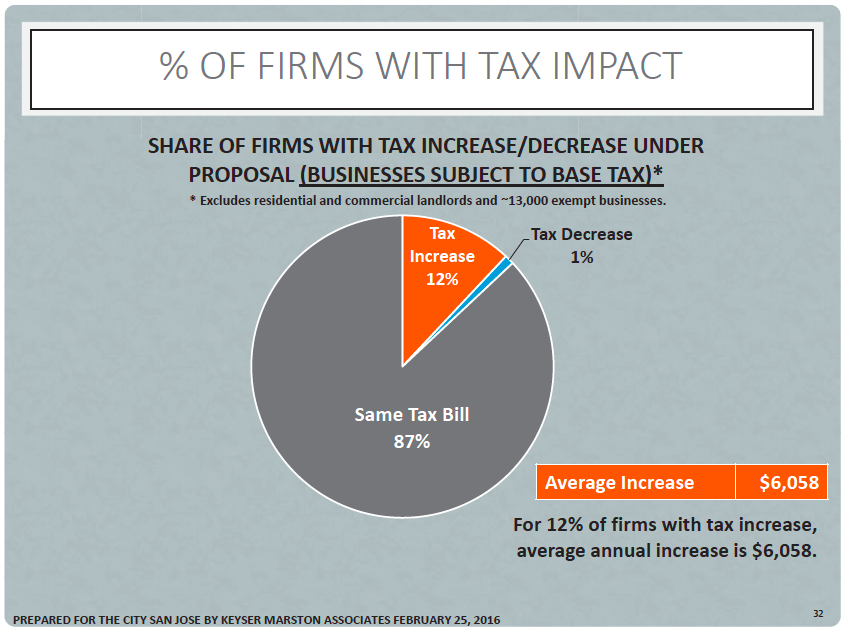 “Small businesses with three to 10 employees would collectively pay close to four times as much in taxes,” the mayor said. “And it would be especially devastating for restaurants and retail shops at our airport, who unlike their counterparts in San Francisco and Oakland, would be subject to the tax.”

Councilman Johnny Khamis has also criticized the tax measure as an attack on mid-sized businesses. In a letter to constituents last month, he warned that the slate of new tax proposals and citizen initiatives could send companies “fleeing for friendlier places.”

A second initiative angling for the ballot would limit businesses with more than 35 employees from using contract labor and last-minute scheduling, Khamis noted. Meanwhile, the city of San Jose, along with Santa Clara County and the Valley Transportation Authority, have proposed a general sales tax increase.

“While I support letting the voters decide on a dedicated sales tax to support police services and the paving of our dilapidated streets, I have a real problem with all of the general sales tax ideas,” Khamis wrote. “With a general sales tax, there is no guarantee that the money will go to a single police officer or a single mile of street repairs.”

For his own initiative, Myers-Lipton said the tax is modest and only asks the biggest businesses to chip in their fair share. Under its existing tax, San Jose charges companies $150 and $18 per employee per year for firms with at least eight workers. But there’s a $25,000 cap, even for companies that make millions of dollars a year. 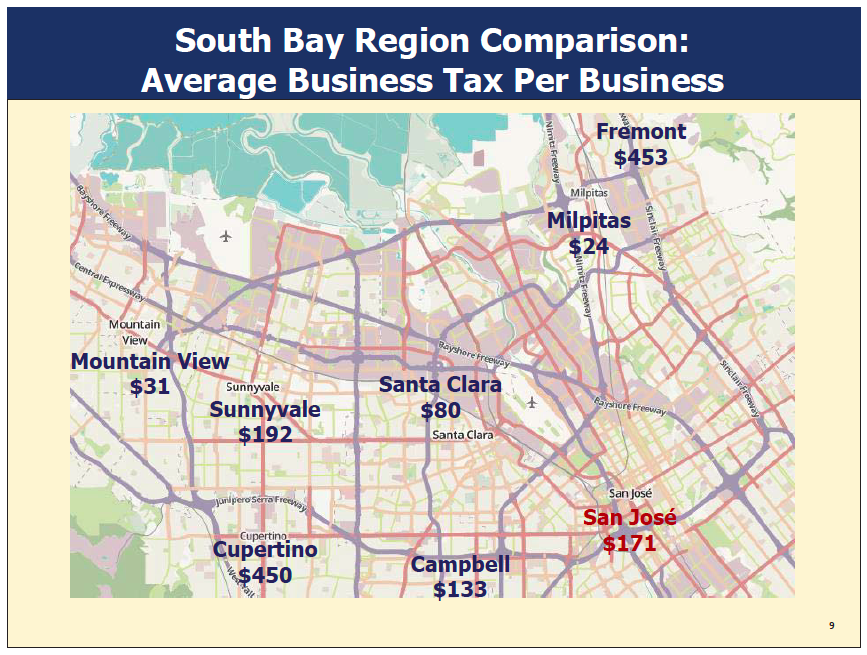 About 30 other California cities have enacted a similar gross-receipts tax, including Fremont, San Francisco, Los Angeles and Oakland. The plan by Myers-Lipton would have lower rates than San Francisco and Oakland but a bit higher than those in Fremont.

Palo Alto tried to pass a gross receipts tax in 2009 but failed to exempt small businesses. Myers-Lipton said he kept that in mind when penning his own initiative.

“This would tax only mid-to-large businesses,” he said, “not individuals or property owners, as other taxes being discussed would.”

To read the Keyser Marston report, which for some reason doesn't include comparisons to Palo Alto, click here. The independent analysis coincides with a new poll that shows overwhelming support for upping the municipal business tax.

If voters approve the measure, it would take effect at the start of next year.