Those are just some of the findings in a just-released state audit that uncovered alarming abuses at the Community Child Care Council of Santa Clara County, which the government pays about $43 million a year to provide day care for 6,000 kids so their parents can go to work and climb out of poverty.

What’s worse is that the California Department of Education (CDE), which allocates about $40 million a year to 4Cs, enabled the abuses with its lack of oversight. Year after year, the CDE failed to detect noncompliance and renewed funding even though the nonprofit repeatedly violated the terms of its grant agreements.

“The findings of the state audit are very troubling,” said state Sen. Jim Beall (D-San Jose), who spearheaded the audit amid pressure from 4Cs employees and clients.

The full scope of 4Cs’ misappropriation of taxpayer money is unknown at this point. But in a review of 1 percent of administrative costs, nearly a third were ineligible for government reimbursement.

The biggest single unlawful charge amounted to $6,859 in grant money that was supposed to go to needy kids. Instead, 4Cs spent it on legal fees for labor negotiations with employees who have been trying desperately to unionize for the past three years. Other illegal charges went to hand sanitizer, a floor heater, tea, tissues, candy and hundreds of dollars of restaurant food for board meetings.

While some of those expenses may seem small, auditors suggested that a more exhaustive review could unearth even more unauthorized charges. The CDE apparently never bothered to check—at least not enough to see any red flags.

“[The CDE] did not detect these misuses of state funds, and without any additional monitoring beyond its reliance on 4Cs’ annual independent financial and compliance audit, [its] inability to identify similar misuses is likely to continue,” the audit states.

When the CDE finally discovered some problems with 4Cs management of five preschool centers early last year, the nonprofit shut them all down to avoid scrutiny of its other programs. The ploy backfired, of course. Because of the move, the CDE finally decided to conduct a more thorough audit, which it expects to wrap up by this fall.

Many of the audit findings confirm problems that San Jose Inside has reported on since it began investigating 4Cs in 2016 and that employees have been sounding the alarm about for years, such as labor violations and a questionable pension plan set up by an unscrupulous financial manager.

Over the course of the audit, 4Cs management played dumb, shifted blame or flat-out lied when confronted about missing records, high staff turnover and why it set up a supplemental pension plan that appears to benefit only one person: former executive director Alfredo Villaseñor.

Villaseñor stepped down last August after four decades at the helm of 4Cs. His interim successor Joe Manarang—a former FBI agent and close friend of 4Cs board president Ben Menor, who appointed him to the role—offered little in the way of answers when auditors asked about the executive pension.

Evasion is a recurring theme in the audit. Throughout the 69-page report, auditors note that Manarang and other management staff said they were unable to provide answers, unable to provide records and would refer inquiries to 4Cs’ attorneys.

That deflection coupled with the so-called top-hat pension being the subject of federal litigation filed by 4Cs employees made it hard for auditors to ascertain as much as they wanted. But they concluded that there’s a strong possibility that state education grants were improperly used to fund the executive pension.

Auditors also learned that Villaseñor set up the account in 2006 on the advice of a financial manager named Kevin Logan, who received “substantial” financial commissions from the deal. The nonprofit submitted federally required disclosure forms on the pension plan 193 days late and with missing information. When asked why, Manarang had no explanation.

The accounting manager wasn’t any more helpful. Auditors hit one dead end after another because 4Cs lacked documentation on how the pension plan was created, how frequently it was funded and where the money came from. Based on the limited information available, however, auditors determined that Villaseñor is the only one who qualifies for the unfunded top-hat pension, which he could very well zero out.

“In contrast to the relatively modest amounts 4Cs transferred for the other participants, the former executive director would be eligible for more than $2 million from the supplemental plan,” auditors noted. “Because the plan’s remaining balance was only $1.3 million as of February 2018, his participation will leave nothing remaining for other employees who may subsequently become eligible for that plan.” 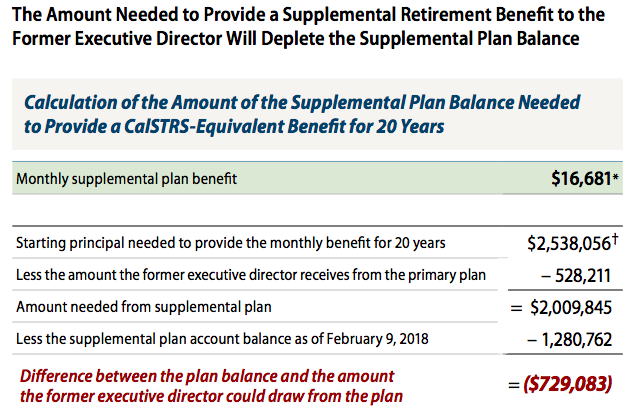 But perhaps the most egregious findings in the state legislative audit involve the way 4Cs disrupted the lives of countless families just to save its own skin.

When it closed the five preschool centers last year, for example, management blamed it on the high cost of temporary staffing but provided no documentary evidence to support the claim. Villaseñor said he closed them at the behest of the CDE—but according to email records between 4Cs and the CDE at the time, that’s another lie. In reality, he left hundreds of families in the lurch purely to dodge scrutiny.

When 4Cs terminated clients’ child care by backdating eligibility renewal notices, which gave families no time to respond, it was to avoid CDE penalties for non-compliance.

From July 2015 to June last year, 4Cs backdated 6,350 renewal notices, which gave families unreasonable deadlines to maintain eligibility for child care. State law requires 4Cs to give families two weeks to respond to an eligibility notice and another two weeks to appeal if it’s denied. In one case, 4Cs created a notice on Dec. 1 and dated it Nov. 14. By the time the family got the form in the mail, its time was up.

“This gave that family no realistic chance to meet the deadline, and 4Cs terminated child care services for two children in the family immediately on Dec. 4.”

The same happened to an estimated thousands of other families.

“I feel betrayed that Santa Clara families are suffering because of 4C’s disgusting misconduct,” said Valentina Renales, a 4Cs parent who nearly lost her child care subsidy last year because of the nonprofit’s mismanagement. “Why should 4Cs be allowed to deny crucial care to young children and take advantage of vulnerable, hard-working families?”

Other parts of the audit addressed the alarming management turnover and high attrition among the ranks, which hurts the quality and timeliness of 4Cs’ service to clients.

The total number of full-time case managers has fallen from 31 to 13 since 2015, auditors found. Meanwhile, the number of temporary employees more than doubled from six to 13. Personnel staff explained the decrease as resulting from a lighter work load, which required 4Cs to reassign the case managers to other units.

“That was a lie,” said a former staffer, who asked to remain anonymous because she still works in the field. “They would leave full caseloads without a case manager. There was too much work for the staff to keep up with. Families did not receive services in a timely manner and retroactive payments were not allowed. The [executive director] and upper management didn’t want to hire anyone that could possibly be recruited in favor of voting in a union. When they did hire people, they were temps with no experience.”

Personnel staffers also told auditors that they don’t know why nine of its 18-member management staff left 4Cs from July 2014 to November 2017. The human resources generalist interviewed for the report said 4Cs hadn’t been monitoring why people left but that it would conduct exit interviews in the future.

The same source who contested 4Cs’ assertion about the case load being reduced took issue with the point about the management exodus, too.

“They tracked every bit of the departures and knew exactly why each staff member left,” the source said.

In recent weeks, 4Cs—which is unrelated to similarly named agencies in other counties—has also come under scrutiny for the way it’s handling some $3 million in federal Early Head Start grants. An investigation by federal officials is underway. But problems with compliance have already been identified, as reported by San Jose Inside last month.

The state audit out this week could give the CDE cause to eventually revoke its contracts with 4Cs, which could give Santa Clara County or another nonprofit service provider a chance to take over.

If 4Cs goes under, it would be the second time Menor presided over a failed nonprofit. Years ago, an audit by the city of San Jose found that he misappropriated $219,000 in taxpayer money meant to serve low-income seniors at the Northside Community Center. Instead, the audit found that he used it to help his parents, to pay himself bonuses and to fund pet projects that had nothing to do with the purpose of the grants. Some of the money went unaccounted for, the city found.

Menor dodged criminal charges by paying $50,000 in restitution (a sum he borrowed from a friend and never paid back, according to a lawsuit). But that doesn’t change the city’s determination that he misused hundreds of thousands of public dollars.

It’s unclear how involved Menor is in the day-to-day operations at 4Cs. But it’s worth noting that 4Cs has come under fire for some of the same problems that drove Menor’s Northside center into the ground years ago.

And just as Manarang deflected queries from auditors, Menor has deflected questions from reporters and the public about 4Cs’ stewardship of taxpayer money. Both men have blamed the nonprofit’s financial decline and heightened scrutiny on union organizers and bad press, pointing the finger at anyone but themselves.