Janell Hillman remembers the first time she noticed the coyote ceanothus plant, more than 15 years ago after a 2003 fire on the ridge above Anderson Reservoir cleared the way for a strange little shrub that seemed to take over.

“The next year the whole ridge was covered with flowers,” the senior vegetation ecologist with Valley Water says. She became insatiably curious.

Coyote ceanothus is one of the many endemic—or native—species to Santa Clara County. It’s also listed as federally endangered by the U.S. Fish and Wildlife Service, which means the species is near extinction in its native range.

Now, due to a badly needed and overdue retrofit of the Anderson Dam in Morgan Hill, the plant could become a little more scarce in the county as scientists like Hillman race to beat construction and combat other forces pushing the flowery shrub—and plants like it—out of existence. 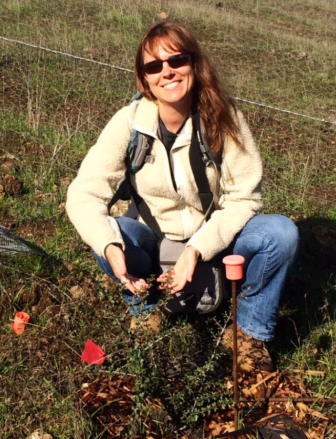 Janell Hillman, senior vegetation ecologist with Valley Water, has spent the past 15 years trying to save the endangered coyote ceanothus. (Photo courtesy of Valley Water)

But back in 2004, as Hillman gazed across the ridge where coyote ceanothus plants were making a home on the hillside, she had no idea the next decade and a half of her career would be dedicated to saving this rare and special plant, or that it would become so urgent.

State authorities in 2009 demanded Valley Water seismically retrofit Anderson Dam, after deciding it could not survive sizable earthquakes and therefore posed an enormous flood risk to Morgan Hill. Valley Water closed access to Anderson Reservoir in October ahead of construction, expected to last until 2031.

But ceanothus is known to grow only in Santa Clara County in three small populations. The largest of those collections is made up of 200,000 plants around the Anderson Dam. The other populations are much smaller, like a group of 2,000 plants growing near Llagas Road in Morgan Hill.

The project to retrofit the dam directly threatens several thousand plants of the endangered coyote ceanothus population, including 3,600 plants that will be removed to make way for construction.

‘Miracle’ in the Making

Hillman has since worked on the unprecedented task of establishing a new population of the species from scratch. That feat, with a new population now located on Coyote Ridge, has been full of obstacles.

When Hillman and her team planted the first ceanothus plants into their introduction site, “everything was great,” she says. “Then, within three or four months all the plants started dying.” Later, the team found out the shrubs were infected with phytophthora, a Greek word meaning “plant destroyer” that is essentially a water mold deadly to many native plants.

“We had to pull out all the plants and destroy them,” Hillman says. “Not only that, but remediate the site—we had to kill the pathogen that was in the soil.”

The phytophthora is the same type of mold responsible for sudden oak death, which kills many oak tree populations throughout California and it’s hard to get rid of once it takes hold. It took Hillman’s team nearly four years to eradicate the pathogen using a combination of solar ovens and greenhouse plastic.

In the end, it’s not only a miracle the group was able to remediate the site, Hillman says, but that her team was able to get the plants to take to their new homes in the first place because of its reliance on rare serpentine soil.

“Serpentine soil is very toxic and it’s got a lot of nasty minerals in it,” says Craige Edgerton, executive director of the Silicon Valley Land Conservancy. “It originally was underneath the ocean floor. Through plate tectonics and volcanic undersea eruption, it was uplifted to where it is now.”

Four plants are native to Santa Clara County, listed as federally endangered and grow in serpentine soil. About 1% of California’s land is made up of serpentine soils, but 15% of protected and native species grow on that small portion of land, Edgerton says.

“All four of those species occur on Coyote Ridge, which is the largest contiguous piece of serpentine in the Bay Area,” Edgerton says.

Valley Water is stuck between “a rock and a hard place,” Edgerton says. On one hand, the authority is legally obligated to fix it. On the other, the Endangered Species Act requires they protect endangered species—in this case the ceanothus.

The consequences or chain reactions that come from not protecting such plants aren’t always immediately apparent, but may still be critically important, Edgerton says. “A lot of people will say, ‘So what? Why is it important to save the coyote ceanothus when there’s so little of it?’” he says. “Well we don’t know ‘what.’” 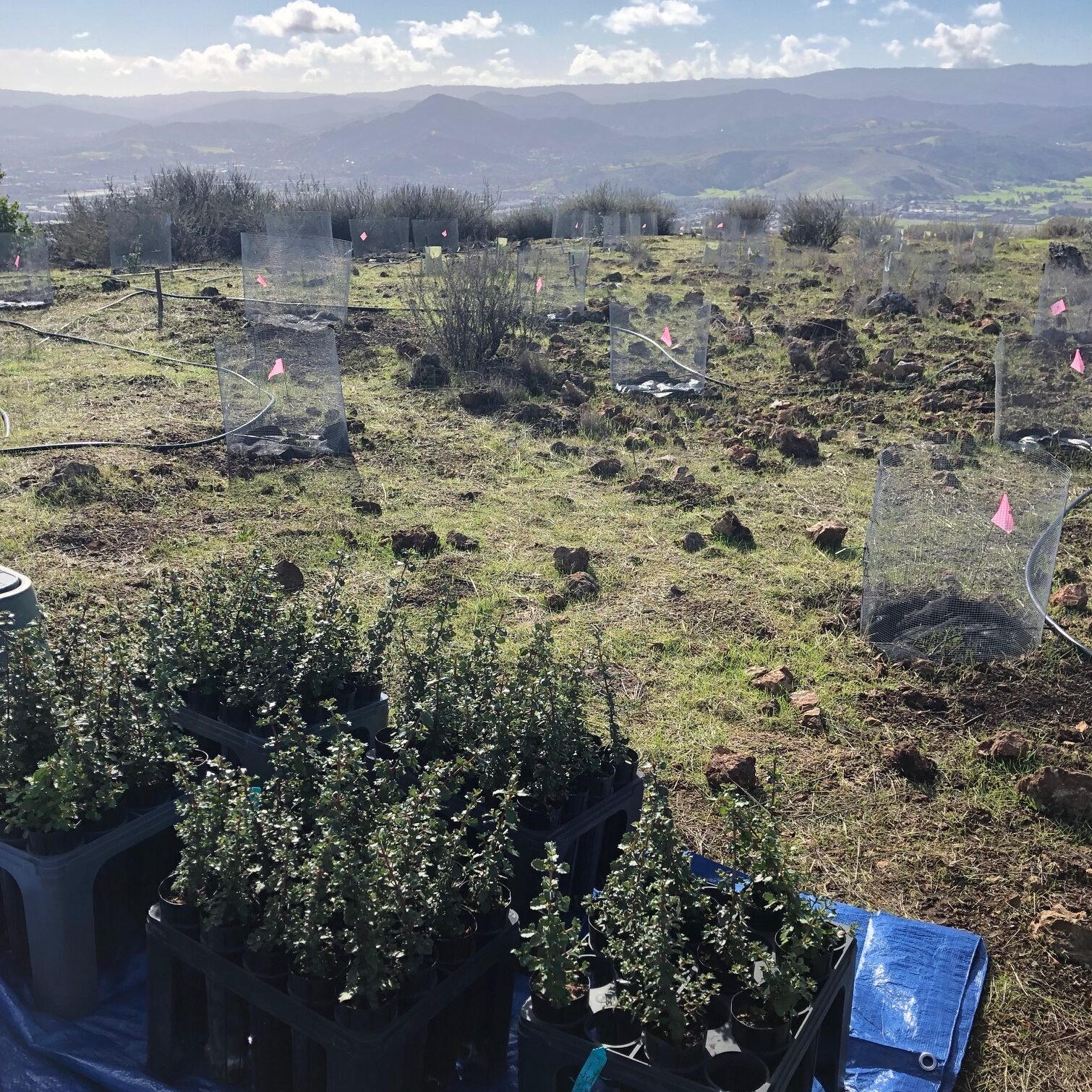 A view of the planting site for the coyote ceanothus in 2018. (Photo courtesy of Valley Water)

In terms of the threats, it’s not just a dam retrofit that looms over the ceanothus and the rest of the county’s endemic plants.

Nitrogen from the vehicle fumes of the South Bay’s cars and trucks has made its way into the region’s soil. The process, known as nitrogen deposition, acts as a fertilizer for invasive species, says Joseph Terry, a senior wildlife biologist with the U.S. Fish and Wildlife Service. The agency is responsible for making sure everyone, including Valley Water, abides by the Endangered Species Act.

“We think similarly that [nitrogen deposition] can be a threat to coyote ceanothus because the nitrogen from smog gets dumped on the soils, fertilizes it, and allows invasives to come in, which then can outcompete the seedlings so it can’t create new … shrubs,” he says.

A whole host of plants and animals are threatened by this phenomenon, which was a driving force behind the 2012 Santa Clara Valley Habitat Plan, a 50-year conservation roadmap for the region, Terry says.

Another threat to species like ceanothus is the warming climate, which leads to drier, more arid conditions. Scientists like Hillman and Terry say such changes will make the area inhospitable to the region’s endangered plant species, so they are looking for other, wetter areas to plant new populations of the flowering shrub.

For now, Hillman takes her victories where she can, including the 1,000 plants she and her team seed annually that are currently doing well. The new plants introduced on Coyote Ridge also bloomed and produced seeds for the first time last year.

“If those seeds that were produced in that population start making little baby plants, and there’s natural germination, that will be a big measure of success there,” Hillman says.

But one doesn’t need to be a scientist to appreciate one of the county’s rarest plants—or miss them if they disappear.

“On a warm day, the plants are so fragrant and they’re just covered in bees,” Hillman says. “It’s just a really nice sweet fragrance … If you’re at Anderson Reservoir, walking on the trails there, the entire air is perfumed by them.”