Four years ago, Santa Clara County joined hundreds of localities in refusing to act as de facto immigration enforcers. Under renewed pressure from the feds and mounting political outrage over “sanctuary cities,” however, the Board of Supervisors on Tuesday will discuss changing that policy.

Since 2011, the county has refused to hold jailed non-citizens beyond their sentence for immigration agents to deport them. But the District Attorney’s Office and some South Bay residents want the county to at least notify federal authorities when an undocumented immigrant convicted of a serious crime gets released back into the community.

Civil rights groups cautioned that notifying federal agents about an undocumented immigrant’s release can have the same effect as detentions, which courts have repeatedly ruled unconstitutional.

“The difference between detainers and notifications is artificial in the eyes of the community,” according to a letter to supervisors from the Forum for Immigrant Rights and Empowerment (FIRE) Coalition. “That is because they have the same intent and effect—to facilitate transfer of a person into [federal] custody for deportation.”

Through a program called Secure Communities launched in 2008, U.S. Immigration and Customs Enforcement (ICE) teamed up with local law enforcement to keep undocumented immigrant inmates locked up past their release dates. ICE agents would do this by issuing what they called civil detainers—an order to hold an inmate for an extra day or two. 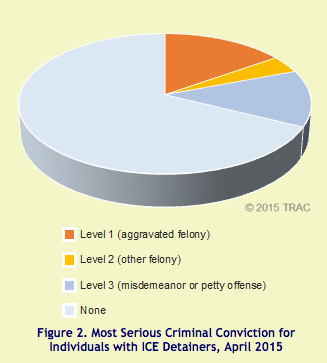 More importantly, the initiative violated the Fourth Amendment by allowing ICE to take suspects into federal custody without a warrant.

Just 19 percent of the 8,000 detainers ICE issued in April this year related to a convicted felon, according to Syracuse University’s Transactional Records Access Clearinghouse. Two-thirds of those targeted had zero criminal convictions whatsoever.

Citing concerns about civil rights violations and fear of litigation, the county enacted a policy in 2011 to ignore detainer orders. Supervisors approved the ordinance despite public backlash and some concerns from DA Jeff Rosen, who wanted to hold only people charged with violent or sexual crimes.

A series of federal court rulings in 2014 reaffirmed the county’s policy that detainer requests are non-binding and, without a warrant, unconstitutional.

Also in 2014, a new state law called the TRUST Act went into effect, dissolving the partnership between ICE and local police. From the day TRUST became law on New Year’s Day 2014 to June 2015, California refused to honor more than 10,500 ICE detainer requests, according to the agency.

A year ago this month, the U.S. Department of Homeland Security (DHS), which oversees ICE, replaced the controversial Secure Communities program with the Priorities Enforcement Program. Called PEP for short, the new policy supposedly narrowed its scope to people convicted of serious crimes.

“PEP begins at the state and local level when an individual is arrested and booked by a law enforcement officer for a criminal violation and his or her fingerprints are submitted to the FBI for criminal history and warrant checks,” according to an explainer on the DHS website. “This same biometric data is also sent ... so that ICE can determine whether the individual is a priority for removal.”

In theory, PEP limits detainer orders to suspected terrorists and serious felons. It also requires ICE to ask local authorities for an alert when a non-citizen inmate gets released, rather than ordering to keep them locked up beyond their sentence. Even with the statewide TRUST act and nationwide PEP, civil detainers can still be issued under undefined “special circumstances.”

Public debate over so-called “sanctuary city” policies reignited this past summer when an undocumented immigrant who had been deported several times shot and killed a woman in San Francisco. Presidential hopefuls on both sides of the aisle, including Donald Trump and Hillary Clinton, urged localities to reconsider their civil detainer policies for violent criminals. San Jose Mayor Sam Liccardo weighed in, imploring the county to re-think its stance. 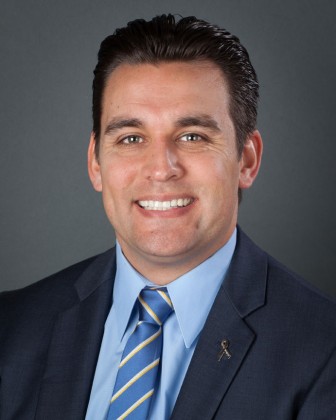 Liccardo's colleague, Councilman Raul Peralez, however, cautioned against politicizing a tragedy. The county, he said, should stand by its policy.

"Immigrants do not commit crimes at higher rates than citizens," the freshman councilman and former police officer wrote in an op-ed last summer for the Mercury News. "If we want a true fix for crime, we need to fix these loopholes for everyone."

Federal crime figures support Peralez's assertion. Between 1990 and 2013, the number of undocumented immigrants more than tripled. Yet during that same timeframe, FBI statistics show that the violent crime rate fell by 48 percent and the property crime rate by 41 percent.

While supervisors won’t vote on a policy next week, they will discuss revisions. One possibility the county has put forward would be to comply with ICE by alerting them to the release of undocumented inmates who are also serious felons, but only with assurance that there’s probable cause.

Additionally, the county would prevent ICE from using county jails or other local facilities for investigative interviews or other purposes. It would also require regular audits of the program to make sure it’s properly applied.

In a subcommittee meeting last month, Public Defender Molly O’Neal said the county carefully crafted its existing policy, which was vindicated in court, and shouldn’t rush to revise it. She said she worries that PEP could expose the county to the same liabilities as the Secure Communities initiative.

At least 11 million undocumented immigrants live in the U.S., according to the Public Policy Institute of California, with 183,000 in this county alone. Statewide, they comprise 10 percent of the workforce. About 79 percent come from Latin America.

Local activists have created a campaign and a petition urging the county to stick to its current policy.

“Responding to ICE notifications is also out of step with the county’s well-rounded efforts of immigrant integration,” the FIRE Coalition noted in their letter last month. “From welcoming unaccompanied minors and families who flee violence and abject poverty, to providing health care services for all residents regardless of immigration status.”

Civil rights violations are not the answer to address senseless tragedy. @SenFeinstein @SenatorBoxer, we want #ICEoutofSCC

More from the Santa Clara County Board of Supervisors agenda for November 17, 2015: