Sgt. Rick Galea led the Nov. 30 sting at Bebe Day Spa that resulted in a prostitution arrest and a lawsuit by the city of San Jose to shutter the strip mall massage parlor until it licensed its way aboveboard.

Months passed, but the hole-in-the-wall East Side joint cited in Rubmaps.com reviews as a go-to for transactional sex had yet to obtain the proper permits. So when Galea picked up some overtime stretching into the predawn darkness of April 23, the garland of white lights flickering in the window seemed suspect.

From his marked patrol car, the vice squad veteran says he watched as three men disembarked from a vehicle around 3:30am, knocked on Bebe’s tint-blackened doors and slipped inside for about 10 to 15 minutes.

In Galea’s telling, the prospective johns didn’t fare so well. “They did not get a ‘happy ending’ or a massage,” the officer recounted at a court hearing earlier this week. With just “two girls” working and “three guys” calling, he explained, the would-be clients left.

Galea, who says he’s worked hundreds of similar cases, surmised that the tenant was violating a Feb. 27 court order to stop doing business. He told the city attorney, who alerted the property owner, who gave Bebe Day Spa proprietor Hung Nguyen a three-day eviction notice. Nguyen settled with the city, which slapped him with a $10,000 fine and a 10-year ban from the massage business, and then dipped out. Nuisance abated.

But the landlord—young mother-to-be Shufei Yang—isn’t off the hook just yet. Two days before a June 22 hearing that she thought would resolve litigation over Nguyen’s alleged wrongdoing, the city upped the ante by accusing Yang of criminal contempt for violating the same temporary restraining order targeting Nguyen.

“That poisoned the well,” Yang’s attorney Harpaul Nahal says, “and they only did that because they didn’t want this to end until they got money from my client.”

City Attorney Rick Doyle says that’s kind of the point. Empowered in part by legislation enacted in 2016 that shifted regulatory power from the state to local governments and in part by new case law, San Jose has increasingly sought to hold property owners accountable for problems associated with their real estate investments. One reason is to make an example of absentee landlords. But the primary motivation is more pragmatic: to recover the cost of enforcement.

“The first step is to abate the nuisance, the second step is to collect fines,” Doyle says. “We’re not trying to be ridiculous here, but we want to make sure the point is made and to make sure that there’s a deterrent.”

Under the statewide Red Light Abatement Act, which was passed in 1914 to crack down on San Francisco’s bustling red-light district, cities can board up buildings used for illicit sex work or gambling and, these days, neutralize the cost of doing so by imposing fines up to $25,000 per defendant. San Francisco City Attorney Dennis Herrera used the law last fall to get the property owner and operator of a notorious Financial District brothel to cough up a combined $295,000. The settlement prevents landlord Frank Iavarone from leasing to massage parlors or any “personal service” business for the next decade.

Lisa Spiwak, a founding partner of Southern California-based Spiwak & Iezza commercial collection law firm, says such nuisance abatement cases reflect a broader movement by cities to hold landlords liable for scofflaw lessees. In a 2015 white paper on how property owners can minimize that kind of liability, Spiwak traces the trend back to a 2005 court case from the Southern District of New York in which fashion powerhouse Louis Vuitton secured a permanent injunction against a landlord who leased to several tenants shilling counterfeit handbags.

Vuitton successfully forced the landlord to oust the tenants, post notices that counterfeit goods are illegal and comply with random compliance inspections. Luxury leather-goods maker Coach followed suit, as did Michael Kors and a slew of other designers. Spiwak calls the approach—which cities tend to wield more on the cannabis, gambling and massage industries—“extremely disconcerting.”

“History indicates that landlords are not legally liable for damages caused by their tenant’s illegal activities unless the landlord is aware of the activities and condones or facilitates them,” she writes in her report. “Recent court decisions, however, are changing history and placing greater burdens on landlords in this regard.” 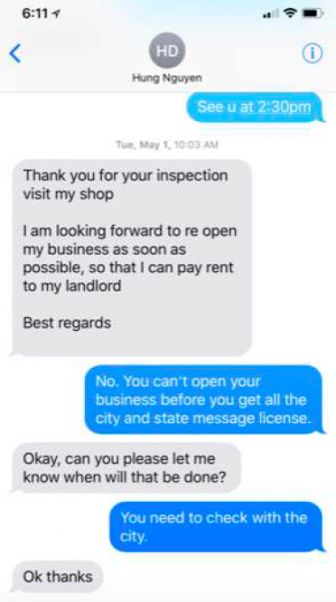 A text exchange in which Shufei Yang tells Bebe Spa's owner to remain closed and comply with the city.

Doyle says it’s reasonable to expect landlords to stay engaged enough with tenants to know what they’re up to, and that the city files anywhere from six to 10 lawsuits a year against property owners who can’t, or won’t, bring their lessees in line. In one case, Doyle’s office litigated to get the Jack-in-the-Box on South First Street to clean up its act.

“It had become a place where pimps were hanging out, prostitutes, drug dealers and what have you,” Doyle says. “It turned out that the owners lived in Oakland, and we notified them that we were going to sue unless they took some responsibility, installed new lighting, fencing or whatever it took to keep the problems out.”

“Since when has the city abdicated its police powers to landlords?” he asks outside Yang’s tan-stuccoed tile-roofed strip mall. “If someone breaks the law, police should arrest them. You shouldn’t expect landlords to do the work for them.”

If the court rules in favor of the city, Yang and her husband could end up with a six-figure judgment and a settlement that would allow the city to randomly inspect not only the emptied-out Bebe Day Spa storefront but the rest of their property, which they bought in 2016 for $5.4 million. “That could lead to a chilling effect,” Nahal argues. “Who’s going to want to do business with them?”

And while San Jose’s legal team accuses the Yangs of turning a blind eye to Nguyen’s apparently fly-by-night massage racket, the couple says they tried to work with the city to resolve the problem as soon as they heard about it. In court filings, Nahal attached copies of cellphone text messages in which Yang expressly tells Nguyen to comply with the city and in which he tells her that he obtained permits to convert the shop into a nail salon.

Doyle doesn’t buy it. In the city’s eyes, Galea’s April 23 stakeout proved that Nguyen wasn’t obeying the terms of the court order—and the Yangs are guilty by association.

“The city taxpayers shouldn’t have to foot the bill for this kind of thing,” Doyle says. “It’s the landlords who made money off of this, profiting off of the illegal activity that was going on, so they should be the ones paying.”

Doyle says, it would be wise for landlords who lease to tenants running those kinds of businesses to ask for documentary proof that they’re up to code. Of the 250 or so massage parlors in San Jose, according to a report by the nonprofit Polaris Project, only 14 are licensed with the San Jose Police Department. Thus, Doyle notes, it’s safe to assume that most could use that kind of accountability.

“If the landlord doesn’t know, then they should know,” he says. “It’s like the proverbial line about the piano player at the brothel not knowing what’s going on in the back.” 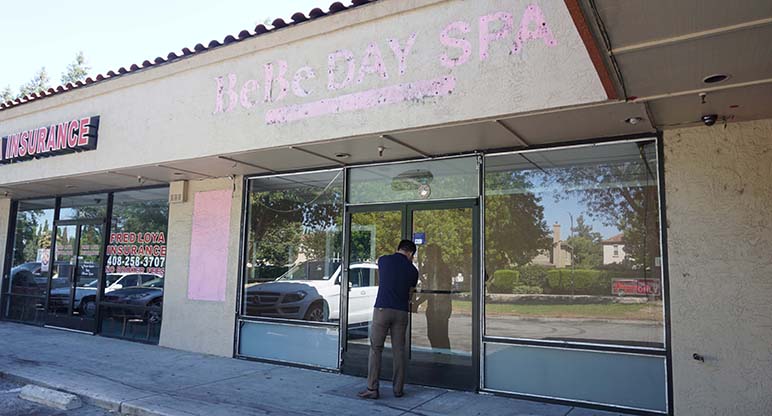