Michael Johnson, his sister said, was the type to "go big or go home."

"He didn't just play chess, he was captain of the chess team," Jamie Radack remembered of her brother. "He didn't just do jujitsu, he became a second-degree black belt. He didn't just make a cheesecake, he used our grandma's super secret recipe and he not only kept that recipe secret, he literally stored it in his gun safe."

He didn't just scuba dive, his sister continued, he swam with great white sharks in the Farallon Islands. At Starbucks he wouldn't just get a cup of coffee, he got a venti quad-shot upside-down caramel macchiato with extra caramel. Go big or go home.

"Mike loved his family with all his heart," Radack said in a eulogy both lighthearted and heartbroken, "and he expressed his love by being present.” 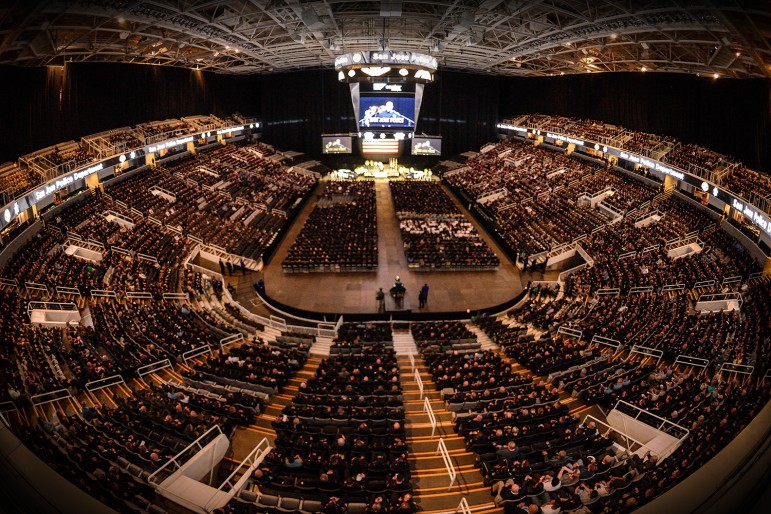 Thousands of people packed the SAP Center on Thursday to mourn the death of Officer Michael Johnson, who on March 24 became the 12th officer in San Jose's 166-year history to be killed in the line of duty. He was 38 years old, a 14-year veteran of the San Jose Police Department.

Leading up to the ceremony, officers from dozens of law enforcement agencies around the state marched to the SAP Center along with a motorcade. In the intersection outside, two fire engines suspended a giant, billowing American flag. Inside, a stage set with flower wreaths and photos of Johnson—in uniform, with his wife, Nikki, and another of him alone grinning at the camera—was flanked by two police cruisers and fronted by the fallen officer's flag-draped coffin.

“This ultimate sacrifice is an eternal reminder that safety comes at a supreme price," California Attorney General Kamala Harris remarked during the service, "and that price must always be remembered by a grateful state and our people.”

Family, friends and colleagues remembered Johnson as a loving husband and son, attentive uncle, faithful friend and a model officer. He married his wife in a civil ceremony in August 2013 and planned to renew their vows in a formal ceremony this coming August.

San Jose Diocese Bishop Patrick McGrath likened him to a meteorite that burned bright and fast, "that flashes across the sky from time to time. They don't last long but those who experience their light remain forever dazzled. That was true with Mike."

“To the Johnson family, we hurt for you like you would not believe," Solis offered.

Solis, Johnson, Fontana and the others came together 14 years ago as a bunch of strangers, scared and afraid, but they evolved into family.

"We didn't know what we were getting ourselves into," Solis recounted with some levity. "Most of us were kids except for two—who were old as dirt."

But Johnson, he said, carried himself with an air of authority.

"I remember the first time I noticed Mike. We were in class and we had some type of instructions on a firearm or weapon, something so ridiculous and so obscure that we would never use it in our career, and he got into an argument with our instructor about it. I remember thinking, 'Who is this guy? What is he doing? Shut up—you're going to kick yourself out of here.'"

Johnson turned out to be right and the instructor later apologized to the class.

From a young age, Johnson's siblings figured he'd become a police officer, that he'd take after their dad, who spent decades as a military police officer in the U.S. Army, then a deputy of the Calaveras County Sheriff's Office. "The most badass cop ever," Radack said of their father, Daniel Johnson.

After spending some years working in retail, Johnson joined the San Jose police academy, graduating on June 15, 2001. During his tenure as an officer, he worked as a patrolman, court liaison, prescription drug fraud specialist and, recently, a field training officer in charge of mentoring young cadets. He also was assigned to the covert response unit because of his skill as an expert marksman and his reputation as an upstanding policeman. 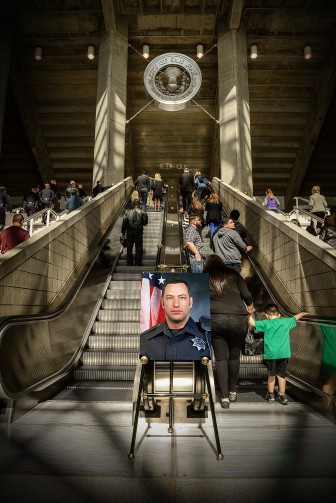 Chief Larry Esquivel said Johnson was everything he looks for in an officer, someone tough but willing to engage the community. A warrior and a guardian, brave and compassionate.

"He was a San Jose officer prototype," Esquivel said. "Always had a smile on his face, respectful, physically fit. The type of officer who would get the job done."

When Johnson and his partner received a radio call nine days ago about a suicidal man with a rifle who had threatened to hurt himself and his family, they rushed to the scene and were met with gunfire. Johnson died on the spot. Officer Doug Potwora answered 57-year-old gunman Scott Dunham's shots with a round to the head.

"The officers did everything correctly," Esquivel said.

He recalled the moments following the officer's death, when he received a call from Assistant Chief Eddie Garcia, who emceed the ceremony.

Solis asked the audience to give a standing ovation in celebration of Johnson's life near the end of his address, asking those present to express how they felt about the life he lived and sacrificed in the line of duty. A thundering round of applause with cheers and whistles lasted almost a minute.

He exhorted people to honor Johnson's life by "choosing to live differently."

"Don’t quit," he said to anyone reconsidering plans of becoming a police officer because of this tragedy. "Don’t let this make you quit. Choose to live differently. It’s this that brings us together to make us stronger. Everybody has a choice in deciding how to deal with this. But if you’re thinking of quitting, you’re doing yourself a disservice. ... Push forward. Keep going. Do not quit.”

He ended his address with a thank you to his fallen friend.

“We thank you for your life and your sacrifice for us," Solis said. "Death did not make you a hero. You were already a hero while you lived. You are forever stitched to us, bonded to us, and now your heart will beat through ours.”

Here is a photo gallery of the procession and memorial service. 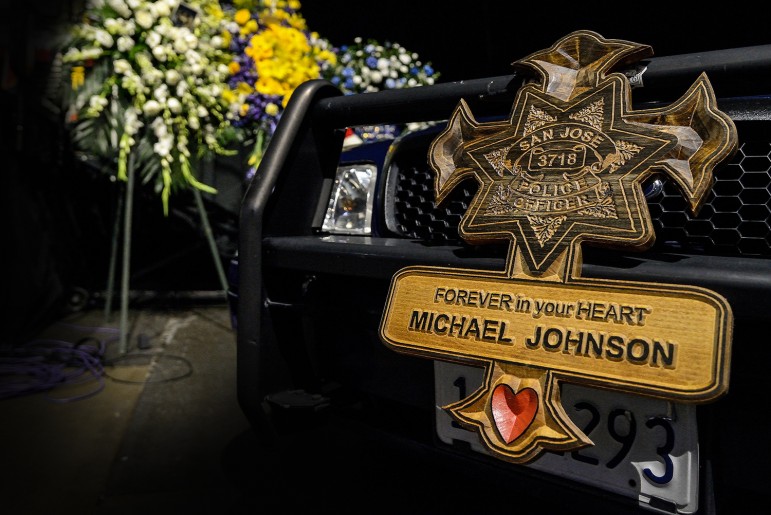