About 220,000 Californians will experience planned power outages Saturday, the first time since 2001 that the state has seen rolling blackouts to conserve energy, Pacific Gas and Electric Co. (PG&E) announced Saturday.

PG&E customers in parts of Monterey, Santa Cruz and San Joaquin counties will go without power for short periods of time starting Saturday night, but none will be without power overnight, per direction from the California Independent System Operator (CAISO), which maintains the state’s power grid.

"Our team is working diligently to keep these rotating outages as short as possible, so that there is no further impact to the grid,” Michael Lewis, interim president of PG&E said in a statement Saturday. “We appreciate our customers' patience as we work to restore power to everyone this evening. We urge all of our customers to take immediate steps to reduce their power usage.”

Data courtesy of CAISO as of 8pm Saturday, Aug. 15

CAISO officials also asked residents to conserve energy through the evening and turn thermostats up to 78 degrees or higher during the heat wave, which has brought 100-plus degree temperatures across the normally temperate Bay Area region.

The rolling blackouts were ordered around 6:30pm Saturday after increased demand for electricity caused the unexpected loss of a power plant on the grid. That pushed CAISO to declare a “Stage 3 Emergency” because demand outpaced supply and operators had to dip into electricity reserves.

“Although a Stage 3 Emergency is a significant inconvenience to those affected by rotating power interruptions, it is preferable to manage an emergency with controlled measures rather than let it cause widespread and more prolonged disruption,” the agency said in a release Saturday. 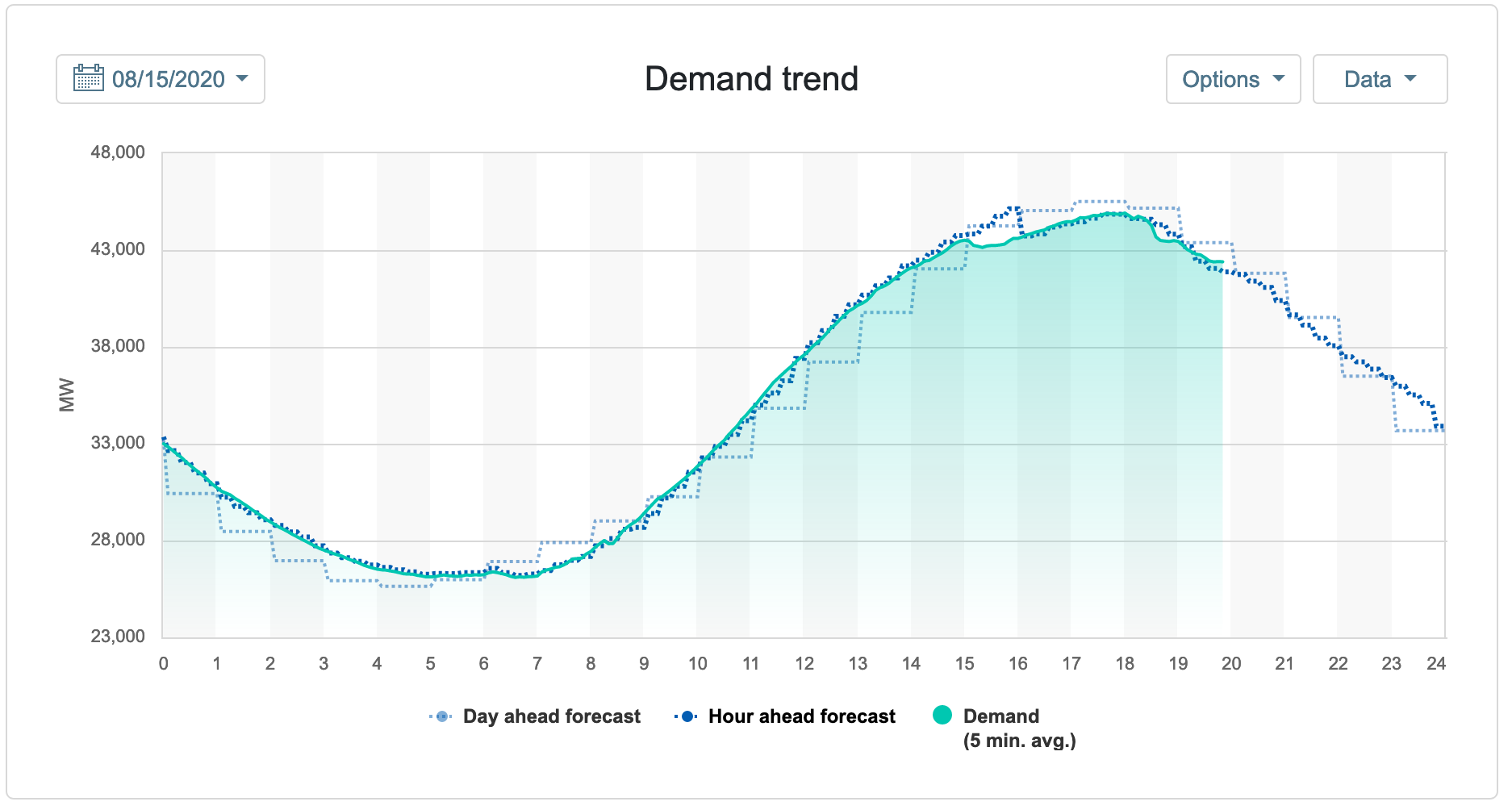 The outages are not like the public safety power outages in the past, PG&E said Saturday. Such outages are implemented during California’s fire season when weather conditions threaten to increase the chance of a blaze being lit and spreading quickly.

Even so, Monterey and San Benito counties are currently subject to a Red Flag Warning, which means the weather lends itself to dangerous fires, according to the National Weather Service. The rest of the Bay Area will also be under a Red Flag Warning starting at 11pm until 11am Sunday.

In Santa Clara County, residents who need a cool place to go during the heat wave can visit one of South Bay’s cooling centers. The cooling center that will be open Sunday and early next week include: