A Titan Arum, commonly known as a corpse flower, is expected to bloom in the next few days for the first time in San Jose State University's Biology Department tropical greenhouse, university officials said Friday.

The 9-foot-tall plant, named Terry Titan, is expected to bloom sometime between Sunday 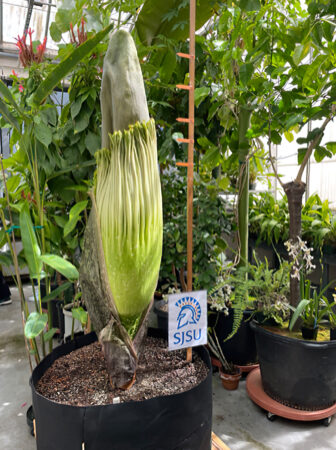 and Tuesday, staying open for only 24 to 36 hours. The flower, when bloomed, will smell like rotting flesh, harkening back to its name as the corpse flower.

The plant, which is extremely rare with only about 1,000 plants in the wild, is considered to be the first corpse flower bloom in recorded history in Silicon Valley. Habitat loss has contributed in making the plant even less common.

The corpse flower is the largest unbranched inflorescence, or cluster of flowers on a main stem, in the world, with the plant often reaching over 10 feet in height.

The greenhouse is not open to the public, but the bloom can be watched on a live stream.