The proverbial “third rail” of California politics remains intact as elections officials tally up the votes for statewide ballot measures and find that a slim majority of the electorate said they don’t want to tax commercial properties at higher rates.

Proposition 15, the measure that set out to create a so-called “split roll” for property taxes in the state, in which most commercial properties would be reassessed every three years and taxed based on their fair market value. The taxes for buildings that people call home, including single-family houses, condos and apartment buildings, would have remained unchanged under the measure.

If Prop. 15 measure had passed, it would have generated between $6.5 billion and $11.5 billion in new revenue for schools and local governments, advocates estimate.

But as of Thursday, Prop. 15 proponents had admitted defeat with about 91 percent of votes counted, and 51.9 percent of those rejecting the measure. Notably, if it had been up to Santa Clara County voters alone, the measure would have passed.

Nonetheless, property tax assessments will stay the same as they’ve been for 42 years, since the current property tax law, Prop. 13, was passed. Property taxes can increase by a maximum of 2 percent annually until a property is sold or massively reconstructed. That often allows longtime property owners—both commercial and residential—to pay well below what they would pay if their home was taxed based on its current fair market value.

Still, the coalition behind Prop. 15, known as Schools and Communities First, says the results are still a win for the movement to change Prop. 13, a law that until recently was considered virtually untouchable by politicians (hence its “third rail,” moniker).

“Against all odds, Prop. 15 made history by taking on the status quo to ensure California becomes a more prosperous and equitable state for everyone,” Alex Stack, Yes on 15 spokesperson said in a prepared statement. “California’s challenges are not going anywhere, and this election result has shown that there is strong public demand for closing the corporate tax loopholes which cost our local communities billions every year.”

Though the measure failed, its relative success compared to similar prior attempts “provides a framework and base of power” for future work, the group says.

As one of the primary architects of Prop. 13 in 1978, the association was vehemently opposed to to Prop. 15. If the measure didn’t pass this year, when young people and democrats were especially energized during a presidential election year, it won’t pass in the future, Susan Shelley, vice president of communications for Howard Jarvis said in an interview with San Jose Inside.

“They’re not going to have a better environment than this one,” she said. “If they had tried this in an off-year election, like two years ago or two years from now, I think it would have been crushed.”

The Schools and Communities First coalition aren’t the only ones to find the results bittersweet. Santa Clara County Assessor Larry Stone has been one of the most vocal advocates for reforming Prop. 13 in the last 40 years and Prop. 15 has so far been the closest effort to that end.

But he was also one of Prop. 15’s loudest critics. Stone insists that if the law had passed, the new requirements for county assessors would have been “impossible” to implement.

“I believe that commercial property owners should pay their fair share, and they don’t,” Stone said in an interview with San Jose Inside. “And I believe the schools and local governments could use that $11.4 billion, but it was aspirational—it was not real. So yeah, it was very bittersweet for me.”

Notably, other assessors around the Bay Area acknowledged the challenges the law would present if it had passed, but not everyone felt quite as averse to it as Stone. 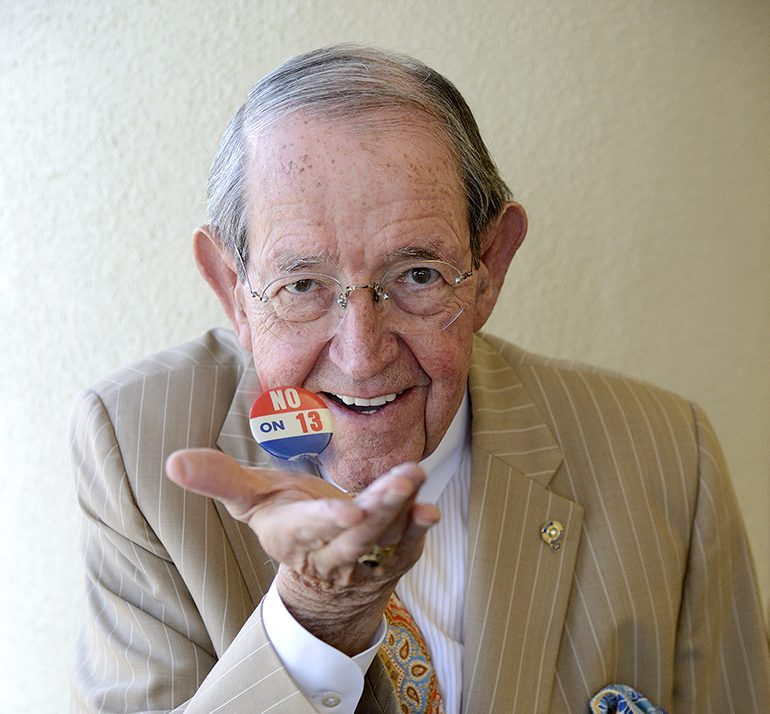 While Prop. 15 was defeated, another property tax-related measure Howard Jarvis had advocated against passed. Prop. 19, which got 51.1 percent of the tallied votes statewide, would change how and when parents can pass on their buildings and below market rate property tax assessments to their children.

Commercial properties will be reassessed when sold.

It also allows people to move up to three times and take their below-market-value tax assessment with them—up from the one-time move now allowed for people 55 and up.

Howard Jarvis officials said they were “saddened” by the measure’s passage. “This will wipe out an important source of economic advancement for California families that work hard to provide a better life for the next generation,” the group said in a statement.

Advocates say the measure will help with one of the region’s most critical issues: housing.

The Santa Clara County Association of Realtors was one of many real estate groups to endorse the proposition in hope of it shaking loose more for-sale homes in the area—something the region severely lacks—and offer more freedom to older adults who may otherwise have been stuck in their home due to low tax rates and a one-move limit.

“This opens up tens of thousands of housing opportunities to make homes more readily available for first-time homeowners, families, and Californians throughout the state,” Sandy Jamison president of the Santa Clara County Association of Realtors said in a statement to San Jose Inside.