John Hirokawa remembers his phone started to ring late on the night of Aug. 26, 2015.

The then-Santa Clara County undersheriff and chief of correction was in Washington, D.C., moving his daughter back to college when he learned that an inmate at the county’s Main Jail was dead.

Michael Tyree, a 31-year-old bipolar inmate locked up on a minor drug charge, had been found lying face up with dozens of cuts on his body. While initial observations were inconclusive, an autopsy would point to blunt force trauma and massive internal bleeding as the causes of death. Other inmates gave accounts of a beating by three prison guards the night before.

The ensuing scramble to respond within the sheriff’s office would set off a media firestorm, followed by an ongoing wave of jail reform activism that has spawned new watchdog groups, increased public spending on high-priced consultants and, most recently, helped fuel a string of inmate-led hunger strikes. The cumulative result has been Santa Clara County’s own version of a criminal justice reckoning playing out nationwide over issues including mass incarceration, the Black Lives Matter movement and the future of sanctuary cities.

The case of Tyree’s death has also emerged as a central point of contention in a June 5 sheriff’s race that pits Hirokawa against his boss at the time of the murder, five-term Santa Clara County Sheriff Laurie Smith. The ballot will also include three other candidates—current Deputy Joe La Jeunesse, teacher Martin J. Monica and retired sheriff’s Lt. Jose Salcido—complicating the path to the 50 percent majority required for the winning candidate to avoid a November runoff.

Hirokawa, who retired from the Sheriff’s Office in July 2016, believes that Smith has long been “asleep at the wheel.” He describes a long-term cultural rot within the department, where 1,800-odd employees lacked clear directions and “nothing gets accomplished,” even in a moment of crisis like after Tyree’s death.

“I was getting dozens of calls from command staff asking for direction,” Hirokawa recalls of the August night three years ago. “The sheriff’s in town, why aren’t you calling her?”

Smith’s response is simple: It was Hirokawa’s job, not hers, to oversee jails taken over by the Sheriff’s Office in 2010 during a wave of recession-era county budget cuts. Though he blames her for not steering the ship, she calls him equally capable of changing direction.

“Did he fully, absolutely, totally run the jail? Yes, he did,” Smith said of her second-in-command-turned-political opponent in an April 20 editorial board interview at the San Jose Inside/Metro Silicon Valley-owned Morgan Hill Times. “And he has taken full responsibility for the murders.”

An ABC7 news interview published in 2015 shows Hirokawa saying “yes,” and then continuing to speak in a muted video clip in response to a question about whether he accepts “personal responsibility” for Tyree’s death. In an April 24 interview, Hirokawa placed blame primarily on the three guards sentenced to 15 years to life in prison for the murder earlier this year, along with the entire Sheriff’s Department “leadership team,” including himself, Smith and other top brass.

Still, infighting about jail conditions is just one of several contentious issues converging ahead of the spring sheriff’s election. Also at hand in the most competitive contest in recent memory are countywide use of force policies and whether to cooperate with the anti-immigration priorities of President Donald Trump. This summer, the county is also expected to receive an updated proposal for a new $300 million jail financed by both the county and the state, in part to house long-term state prisoners reallocated to local jurisdictions after 2011’s AB 109 law to combat chronic overcrowding.

As of the most recent campaign disclosures filed in late April, Smith is handily outraising her opponents in the June contest. The incumbent reported more than $106,000 in monetary donations and $40,000 in loans, while Hirokawa posted $9,900 in cash and $75,000 in loans. Salcido reported $43,950 in total contributions, with well over half of that in loans or in-kind support.

In recent weeks, controversy has also resurfaced in the form of a 25-year-old allegation first reported by Metro (San Jose Inside’s parent publication) in 1998 that Smith interfered with an Internal Affairs investigation of a sexual harassment complaint filed against her by a male subordinate. During a 1992 conference, former sheriff’s Sgt. Gary Brady told the Mercury News in an April 1 story that Smith “made sexual advances toward him” in a parked, unmarked police car, despite the fact that both were married at the time. As San Jose Inside previously reported, Smith is accused of then pulling a cassette tape with evidence from the case file. 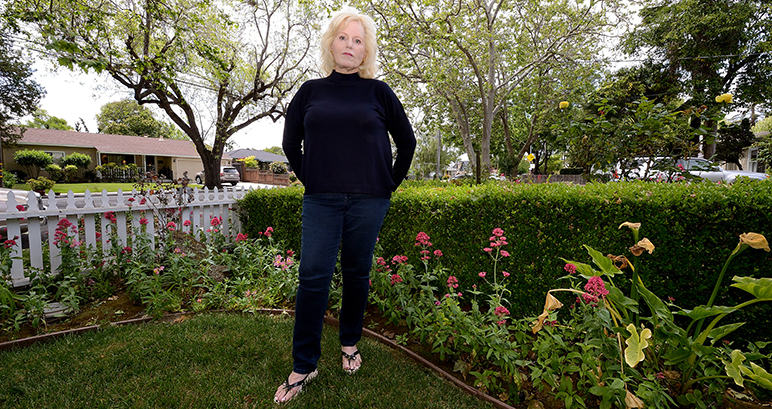 In a race that has at times veered more into the realm of reality television than substantive debate about policing and prisons, outside observers like Jose Valle say that whoever becomes the next sheriff would be wise to pay closer attention to those directly impacted by county policy.

“You have to consider the experience of the prisoners inside,” said Valle, a community organizer focused on criminal justice for activist group Silicon Valley De-Bug. “That just saves us a lot more money than spending it on experts.”

A wave of reports and reform plans published by the county since Tyree’s death have resulted in a string of five- and six-figure agreements with consulting firms to study everything from health care and disability access inside county jails to much more fundamental issues. Case in point: who is actually managing day-to-day jail operations eight years after the Sheriff’s Office merged with the county Department of Correction.

“Once she’s built up her empire, she loses interest,” Hirokawa said of Smith’s leadership during that period. “They had to hire a consultant to figure out who’s running the jails.”

An “organizational structure review” by Sacramento firm CGL Cos. released in March concluded that, “In practice, the Sheriff’s Office manages all jail operations.” Still, the consultants added, governance and overall performance of the system are shared with the county Board of Supervisors.

“There really should be a more clear-cut chain of command,” Smith acknowledged in the interview with San Jose Inside’s sister publications in South County, noting that undersheriffs including Hirokawa have been tasked with taking on responsibilities previously delegated to the chief of correction. “If you ask employees, they don’t know who they work for, necessarily.”

Amid the leadership scuffle, Valle and fellow criminal justice activists are closely watching what he terms a wave of “inside activism” that has taken root inside jails over the last two years.

Some 200 inmates at both the county’s Main Jail and Elmwood facilities have participated in three hunger strikes organized since October 2016 by a group called Prisoners United of Silicon Valley. All three strikes, including an 11-day hunger strike just ended April 26, have resulted in changes to policies for inmates in solitary confinement, inmates designated with “protected custody status” and the amount of time inmates get outside their cells, Valle said.

“Once you become empowered to stand up for yourself … it expands people’s minds,” Valle said of the protest streak. “I think it’s become a part of the fabric in the jails.”

If so, that would mark a major change since a hunger strike last October, when Smith told San Jose Inside that, “Some of them could stand to lose a little weight. We will give their fresh food to the Salvation Army again. There are hungry people who committed no crimes and deserve a dinner.” 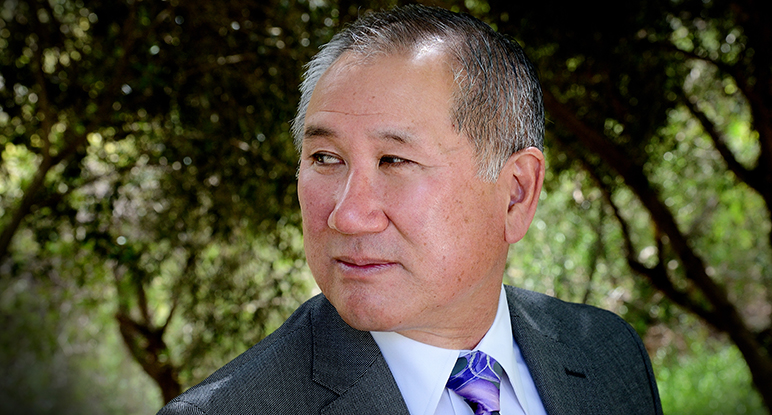 John Hirokawa retired as undersheriff in 2016 and is now challenging his former boss in the June primary. (Photo by Greg Ramar)

In the power struggle between Smith and Hirokawa, one shared challenge has been whether two candidates with long tenures inside an organization plagued by discord can really be expected to reform it.

“I’ve never been asleep at the wheel,” Smith said of Hirokawa’s most frequent campaign attack line. “I do more hours in that place than any other employee ever would.”

The tension most visibly came to a head in early April, when former Santa Clara County Judge LaDoris Cordell appeared with Hirokawa to demand Smith’s resignation in tandem with the release of a 66-page report that praised Smith’s leadership following the Tyree murder.

Cordell, who helmed a blue-ribbon reform commission convened in response to public outcry after the jailhouse death, called the $75,000 report authored by GAR Inc. Criminal Justice Consulting a “puff piece” that the Board of Supervisors should refuse to accept. She also advised the county to request repayment from Smith, who in turn expressed disappointment that county supervisors did not hear from the consultant who wrote the report, former Boise, Idaho, Sheriff Gary Raney.

Other reports have raised concerns about accountability within the sheriff’s office. The Deputy Sheriffs’ Association, which has endorsed Hirokawa, questioned a stark drop in jail employee firings. In 2014 and 2015, the report found that zero employees had been fired for misconduct, which the authors attributed to one of two factors.

“First is that the sheriff is doing so well in managing the jails that employees are not committing any fireable offenses. That is unlikely,” the report notes. “The other possibility is that there were limited or no investigations by the sheriff.”

Such criticism has led Hirokawa to try to distance himself from the administration he once helped run. In an interview in which he was asked about his role as chief of correction, he twice insisted that he was “chief of food services, warehouse, laundry and administrative booking.”

“That’s completely false,” says current Assistant Sheriff Carl Neusel. “Hirokawa ran those jails. Those were his meetings, every Wednesday. He ran them, no one else did. Trust me, food service, bookings and laundry were never discussed, but everything else was.”

“He would micromanage every decision. He ran the training. He sat in on the interviews to hire prospective deputy applicants,” Neusel says.

As to any ways he felt Smith limited his leadership ability, Hirokawa said he was directly barred from allowing former Chief of Correction Ed Flores to help the department run the county jails.

“I wanted him to attend our staff meetings and be part of our staff,” Hirokawa said. “Sheriff said ‘No, why are you going to invite him, John?’”

Hirokawa also blames Smith for dragging her feet on building a new jail, including a modernized booking system that he says would better process inmates like Tyree with special circumstances.

“You have behavioral health issues, and what then happens?” Hirokawa said. “You have use of force.”

With a revised jail plan expected this summer, a March report to the Board of Supervisors indicated that major design changes could result in “a delayed opening date and additional construction costs of approximately $1 million per month.” Also up for debate is whether county deputies should be allowed to use Tasers on inmates, which Smith supports and Hirokawa opposes.

In the meantime, as Santa Clara County continues to add new jobs and residents, the question is how bitter infighting between the region’s top cops might manifest in an area already experiencing intense social growing pains.