Most California voters would rather have the U.S. shelter rather than deport the tens of thousands of unaccompanied Central American children entering the country illegally, according to a poll released Wednesday.

According to the new Field Poll, 58 percent of the state's voters say the U.S. should offer "shelter and support" to the migrant children until the government figures out their long-term status.

Fifty-five percent of those surveyed would like to see President Obama issue an executive order to to deal with the children in the absence of Congressional action. Pollsters called 1,280 registered voters in six languages across the state. Not surprisingly, opinions were divided across party lines. 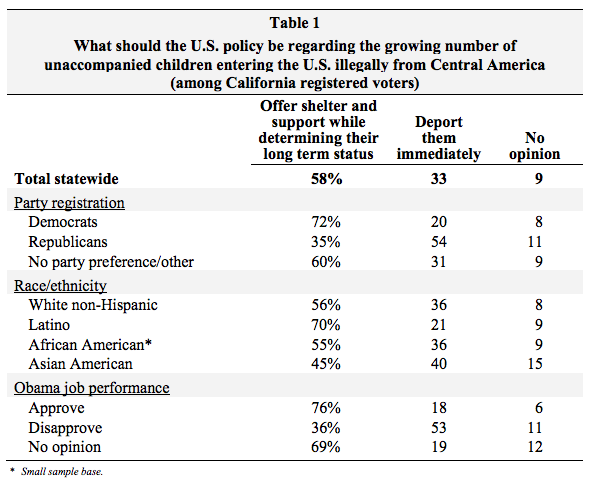 The child refugee crisis at the southern border has been growing for years. But it exploded in recent months. More than 50,000 children showed up alone to the Mexican border within the first half of 2014—a 90 percent increase from last year—and were placed in detention. Another 90,000 are expected to arrive before the end of the year and an estimated 140,000 in 2015 as children escape violence in their home countries. Border patrol officials have called it a "humanitarian crisis."

In August, the Santa Clara County Board of Supervisors voted in favor of a plan to temporarily house some of those migrant children to keep them out of overcrowded, unsanitary detention facilities at the border. Some 30,000 of those children are already being cared for throughout the country, while authorities decide whether to keep or deport them back to their families.

Rep. Zoe Lofgren brought the proposal to supervisors in the absence of federal action on immigration.

County officials will work with nonprofits, including the Catholic Charities of Santa Clara County and the Bill Wilson Center, to place up to 50 children with a local host family. The county will seek federal funding to

"Federal law states that [unaccompanied minors] must be served 'in the least restrictive environment,' and host homes are less restrictive and more family-like compared to detention centers," Bill Wilson CEO Sparky Harlan wrote for San Jose Inside last month. "This is especially important when it comes to younger children, for whom stable, trusting relationships are even more central."