The Santa Clara Valley Water District has thousands of sandbags on hand to cope with the overflow of rain from the storm currently battering the Bay Area. The agency is asking the public to report downed trees and creek floods, while also providing information online and via text alerts.

Weather experts have donned the downfall Pineapple Express, thanks to the "atmospheric river" that has made its way over from Hawaii.

As of 11am, the Water District said it had delivered 45,000 sandbags to a range of  sites, which are open 24 hours for the public and can be located here. People can also receive text alerts about potential flooding and flood safety information by texting the word “WATER” to the short-code phone number: 84444.

Schools in the North Bay, Oakland and San Francisco closed today and many workers were told to stay home to avoid congested and dangerous traffic. Here's a list of school closures compiled by ABC7 news. San Jose City College and Evergreen Community College aren't on the list, though they have canceled all classes after 3pm today.

Officials warned of inevitable power outages, which already began rolling through the Bay Area early this morning. PG&E put together a map of outages here, which it updates every 15 minutes.

For traffic updates, you can check the Caltrans website, which reports road conditions in real time. The Santa Clara Valley Transportation Authority sent out a series of notices this morning warning of service interruptions because of flooding. To stay current with which bus lines are still running, follow VTA on Twitter.

The Gilroy Armory and the Boccardo Reception Center off of Little Orchard in San Jose have become an emergency shelter for the homeless until the storm ends. For more about the region's cold weather shelter program, click here.

Silicon Valley residents took to social media to share photos of flooding, spread warnings to other drivers and debate the best hashtag to use. 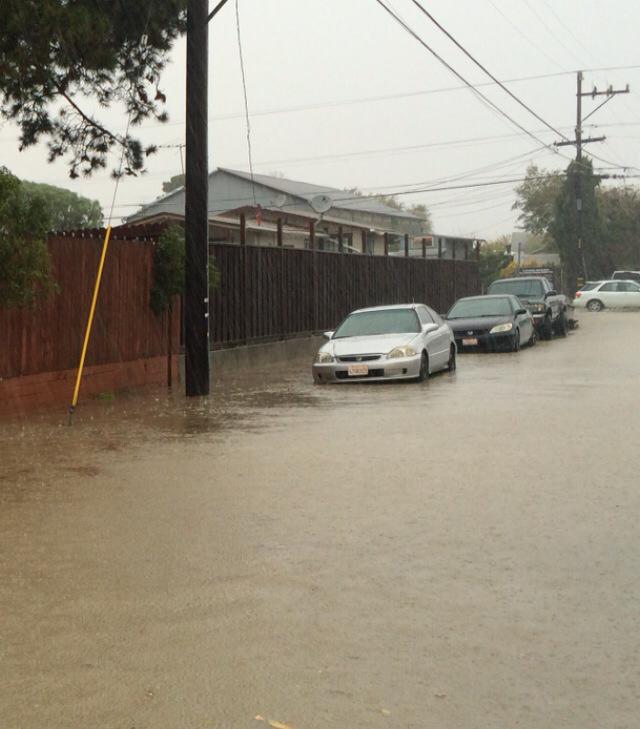 Flooding around Alviso, in north San Jose. (Photo by Mark Espinoza, via Facebook)

Under pass at Julien&Stockton in downtown San Jose closed due to flooding. Tracking the storm @kron4news pic.twitter.com/GTXHKKDtZU

My former producer: Don't laugh at CA for #stormageddon. The rest of you freak out over earthquakes that wouldn't get us out of our chairs.

Since this storm apparently is going to destroy California, we need a catchier name than #rainpocalypse or #stormageddon. Ideas?

SAN JOSE— The storm is subsiding in Santa Clara County and moving east. Street flooding has occurred and all drivers are cautioned to take extra care on your drive home. Stream flows in local creeks were actively monitored all day and none have reached capacity or experienced flooding.

The water district is working diligently to keep all of its sandbag distribution areas stocked with sand and empty bags. Additional filled sandbags will be delivered Friday, December 12th, to Palo Alto (3,600), Alviso (1,800), Morgan Hill (3,600), and City of San Jose Central Service Yard (1,800). Sand bag distribution sites are open 24-hours for the public.

SAN JOSE— The storm continues to hit Santa Clara County. At this point, street flooding has been observed but no flooding has occurred on local streams or creeks.

Because of the lower elevation of the Alviso community, it is prone to flooding. The City of San Jose is operating a pump station to keep rain water from inundating local streets. The water district is providing additional pumping resources to reduce the risk of potential for street flooding.

Flows in Ross, West Little Llagas, San Francisquito, and Upper Penitencia/Berryessa creeks are being actively monitored as further bands of rain come through. There remains the potential for flooding along Ross Creek in West San Jose and West Little Llagas in Morgan Hill. Water district crews are on location.

Residents are reminded to not walk through moving water. Six inches of moving water can make you fall. Also, do not drive into flooded areas. If floodwaters rise around your car, abandon the car and move to higher ground. You and the vehicle can be quickly swept away. A foot of water will float many vehicles. Two feet of rushing water can carry away most vehicles, including SUVs and pick-ups.

The water district is working diligently to keep all of its sandbag distribution areas stocked with sand and empty bags. Sand bag distribution sites are open 24-hours for the public. Locations can be access at:http://www.valleywater.org/services/sandbagsites.aspx

The public is asked to submit any information about downed trees in streams or other threats of stream flooding to Access Valley Water: www.valleywater.org

Below is the full press release from the Santa Clara Valley Water District:

SAN JOSE— The storm is directly hitting Santa Clara County now and is expected to continue to hit the area hard over the next three hours. (NWS)

At this point, street flooding has been observed but no flooding has occurred on local streams or creeks. Flows in Ross, West Little Llagas and Upper Penitencia/Berryessa Creeks are being actively monitored. Ross Creek in West San Jose is rising rapidly and is in danger of flooding. Water district and city of San Jose crews are on location.

The water district is working diligently to keep all of its sandbag distribution areas stocked with sand and empty bags.

The public is asked to submit any information about downed trees in streams or other threats of stream flooding to Access Valley Water: valleywater.org

Additional information can be found at: