As thousands of Sonoma County homes smoldered in ruins from the Tubbs Fire in the fall of 2017, Darius Anderson—veteran lobbyist for Pacific Gas & Electric Company and an owner of the Press Democrat daily newspaper—established the non-profit Rebuild North Bay Foundation.

In an application for tax-exempt status, Anderson told the Internal Revenue Service that his charity would “provide immediate disaster relief to those residents of the North Bay who were hardest hit: families and individuals with low incomes who have been displaced from their homes and/or lost their jobs due to the wildfires.”

According to a months-long investigation by the North Bay Bohemian, a Metro publication, that’s not how things played out. The foundation’s independent audit and tax returns and hundreds of emails obtained from local governments reveal that the non-profit founded by Anderson and headed by Jennifer Gray Thompson functions more as a lobbyist than disaster relief group.

During its first year of existence, most of the foundation’s revenue came from PG&E while the bulk of expenses went to management. It spent relatively little money on grants to the public, according to the audit. The foundation made erroneous claims in its tax return regarding its lobbying activities—serious errors which the organization said it will correct. Despite laws prohibiting such foundations from making campaign contributions, Rebuild North Bay donated cash to support local elected officials.

While Rebuild North Bay has performed some charitable acts, it has devoted more resources to creating a network of business people and local public officials to lobby bureaucrats and legislators in Washington DC. Under IRS rules, a charity may engage in some lobbying related to its purpose—but a primary focus on lobbying can cost its tax-exempt privilege.

According to multiple experts, Rebuild North Bay blurred the boundary between charity and political influence machine.

“It’s not even a close call; it’s blatant lobbying,” said Ellen Aprill, a Loyola Law School professor. “The foundation is primarily a lobbyist, not a charity.”

In addition to the Rebuild North Bay Foundation’s founders Anderson and Marisol Lopez of Platinum Advisors, its 18-member governing board comprises a veritable “who’s who” of Bay Area business elites.

Board president Elizabeth Gore runs Alice, an artificial-intelligence website for business owners, and is married to Sonoma County Supervisor James Gore. Other directors include four renowned vintners and United Way of the Wine Country CEO Lisa Carreño. In the tax filing, Anderson’s business partner, Press Democrat publisher Steve Falk, is listed as a friend of the board.

Anderson’s stake in the local news business paid off last year when a panel of arbitrators implicated him and Doug Boxer—his partner in Kenwood Investments and son of former senator for California, Barbara Boxer—in a fraud scheme that victimized a group of indigenous people. Just about a year ago, the San Francisco Superior Court affirmed the arbitrators’ finding that Anderson and Boxer bilked the Federated Indians of Graton Rancheria when the tribe was trying to develop a casino in Sonoma County in 2003. The Press Democrat did not report the finding of fraud in its brief coverage of the court-ordered $725,000 award to the Native Americans.

It was Anderson’s unsavory dealings with the tribe that prompted this news organization to take a closer look at Rebuild North Bay.

To its credit, the foundation does boast some charitable accomplishments. Over the past year, it organized PG&E and other businesses to help replace burned street walls in several neighborhoods. It gave a county government $25,000 and partnered with United Way of the Wine Country to distribute $300,000 in small grants to community groups.

For these acts, Rebuild North Bay has received plenty of coverage in the Press Democrat in articles that “disclose” Anderson as the founder of the charity. On the other hand, Press Democrat articles omit Anderson’s role as a PG&E lobbyist in stories about the utility. Nor did the newspaper report that PG&E gifted Rebuild North Bay millions in start-up funds—money which has yet to trickle down to fire victims.

PG&E to the Rescue?

The day after Christmas 2017, PG&E cut the Rebuild North Bay Foundation a check for $2 million; the utility’s largesse accounted for 75 percent of the foundation’s contributions in the ensuing months.

While the region struggled to rebuild itself after devastating fires, however, the foundation disbursed only 1 percent of its cash to the public during its first year. Meanwhile, it spent hundreds of thousands of dollars on salaries, consulting fees, overhead, lobbying, advocacy and travel, according to its tax filings, and ended its first fiscal year with $1.8 million in the bank. “We were conservative in the first year because we are committed to the long term,” Thompson explains.

According to the foundation’s independent audit of its first fiscal year, it made only one cash grant—$25,000 to Lake County to help it pay for fighting the Pawnee wildfire. Management and administration costs amounted to $302,760—83 percent of its total cash expenses of $362,428. Many of the disbursements the foundation claimed as charitable grants raise questions about their value to a community trying to recuperate from devastating wildfires.

To celebrate its first anniversary in October 2018, Rebuild North Bay distributed 5,000 emergency preparedness bags emblazoned with its logo to local residents. The bright yellow sacks did not adhere to the California Department of Public Health’s recommended components for standard emergency kits.

Rather, the bags contain two dust masks donated by Freidman’s Home Improvement, a tiny hand-cranked flashlight courtesy of PG&E, a throw-away cell phone charger supplied by Comcast and a toothbrush, toothpaste, plastic razor, shampoo and conditioner gifted by Kaiser Permanente. Completing the so-called GO! Bags were a handful of brochures, including a “Prepare with Pedro” coloring book. A FEMA brochure warns us to “Save for a Rainy Day” and “Make a Plan.” 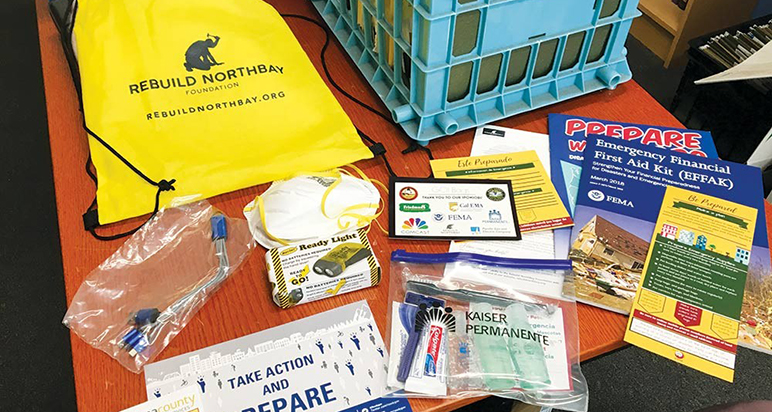 SWAG BAGS: The Rebuild North Bay Foundation distributed 5,000 promotional tchotchke-filled ‘GO! Bags’ to fire victims and other residents and claimed it as a $75,000 charitable grant. (Photo by Peter Byrne)

Casey Mazzoni, a San Rafael-based lobbyist hired by Rebuild North Bay for $60,000, oversaw the bag project, which the foundation pegged as a $75,000 community grant.

By contrast, following the fires, Redwood Credit Union’s North Bay Fire Relief Fund distributed $31 million to the community from more than 41,000 donors. Its administrative costs amounted to 3 percent of its grants, according to its 2017 tax return. The non-profit North Bay Organizing Project’s UndocuFund made $6 million in cash grants to almost 1,900 families that lost homes, possessions and earnings in the fires while only 10 percent of revenue went to overhead.

The law allows Rebuild North Bay Foundation, as a charitable organization, to focus some of its activities on lobbying government officials on issues relevant to its mission. Non-profit tax experts consulted for this story say such a group should spend more than 80 percent of the budget on the charitable purpose, not on lobbying of any sort.

According to tax filings and financial documents provided by Thompson, Rebuild North Bay deposited $2.8 million in cash and non-cash donations from more than 100 donors in its first year. PG&E donated most of the cash. Ordinary people wrote checks for $20 or $50, richer folks donated five-figure sums for disaster relief. The Ford Dealers Advertising Association gave $25,000; the Associated Students of Stanford University gave $5,000; a Girl Scouts Brownie Troop raised $904. What happened to the money?

During its first year, Rebuild North Bay distributed $169,499—6 percent of its donations—as wildfire disaster relief, offering only a small part of that charity in cash. Most of it came in the form of donated items passed through the foundation’s books and counted as grants to the public.

According to its tax return, much of the foundation’s first year budget went to “coordination”—paying staff salaries, consulting fees and more than $100,000 to build a website with headshots and biographies of its directors. It spent $28,500 on “advocacy” and $18,500 for lobbying, which it defined as “direct contact with legislators, their staffs, government officials or a legislative body.”

Anderson ostensibly chartered Rebuild North Bay for disaster relief, not to intersect with the founder’s financial and business interests or send politicians to lobby in DC. Yet time and again, the non-profit apparently went far astray from its stated mission.

For example, until Nov. 1, Anderson’s lobbying firm, Platinum Advisors, counted PG&E as a client. As PG&E grappled with bankruptcy and $30 billion in liabilities for sparking wildfires around California, two of its executives served on the foundation’s board, which counted the utility as a “partner” in charitable giving.

The debris removal company Ashbritt Environmental also hired Anderson’s lobbying firm and gifted the foundation with $450,000—only after some of the foundation’s board members pressed federal officials to change regulations governing disaster cleanup reimbursement. Ashbritt was paid $288 million in federal funds as part of the $1.3 billion cleanup operation.

In its IRS tax filing, Rebuild North Bay credits its influence for Congress upping the debris-cleanup reimbursement rate. When asked for evidence that the foundation played such a pivotal role, Thompson replied: “Prove that we didn’t.”

While the foundation boasts of its effective advocacy, however, Thompson denies that such influence activities constitutes lobbying.

Ultimately, it’s up to the IRS to determine whether the Rebuild North Bay Foundation has run afoul of non-profit rules, according to Philip Hackney, a professor of non-profit law at the University of Pittsburgh.

“What is most interesting,” he says, “is that Rebuild told the community it was going to do one thing and then ended up doing another.”

This story was supported by the Fund for Investigative Journalism and pro bono legal assistance from the Reporter’s Committee for Freedom of the Press.