A newly formed coalition has a simple strategy to keep families from being torn apart by deportation. When U.S. Immigration and Customs Enforcement conducts a raid, the grassroots group Migra Watch will send people to show up and document what occurs. Those observations could serve as evidence to bolster the detainee’s defense in court.

Migra Watch, which began training people in the South Bay this past month, is about to launch a 24-hour hotline for families targeted by ICE to request a legal observer. Scores of volunteers on Saturday filed into the sanctuary of Alum Rock United Methodist Church in East Side San Jose to learn what to do if they’re summoned to help.

“The immigration system has been working in the dark,” Luis Angel, an attorney for Pangea Legal Services, told the audience. “But I believe that if the American people knew what was happening on the ground in their name, they would be outraged.” 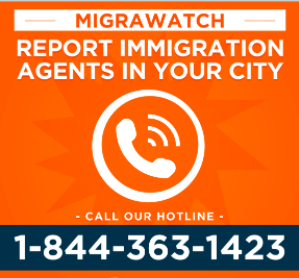 Once the hotline is up and running later this month, families targeted by ICE will be able to call the number and report their address to a dispatcher, who sends text messages to registered observers within a few-mile range. Those who are available will text that they’re on the way, and then head to the listed address to video, photograph and otherwise document the raid.

The first order of business is to verify the raid, Angel said. If the report is a false alarm, the observers tell the dispatcher, who relays the message to the community. If there is indeed a raid, however, the observers collect as much information as possible.

“This is unprecedented—no one has recorded ICE before,” said Angel, who grew up undocumented and was granted temporary legal status under President Barack Obama’s Deferred Action for Childhood Arrivals (DACA) reform.

But he cautioned against engaging with officers on the scene.

“ICE does not know the law,” he said. “You’re not going to win a legal argument with ICE. In the streets, you use common sense. You use street smarts. But you’re going to enforce your rights in court.” 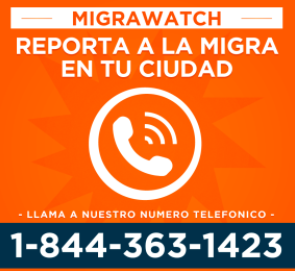 Documentation and eyewitness accounts can greatly affect the outcome of the ensuing deportation case, Angel explained. If he can convince a judge that ICE acquired evidence unlawfully, he said, the case could get thrown out.

It also helps when the people targeted by ICE know their rights in the first place, Angel said. Thus, in addition to training legal observers, Migra Watch educates families of undocumented immigrants.

All people in the United States, citizen or otherwise, are entitled to certain Constitutional rights, Angel told the audience. They’re protected from unreasonable search and seizure. They have a right to remain silent. They have a right to legal representation. But the immigration system has violated those rights for decades, Angel said.

Although deportation tears apart families and strips away “all that makes life worth living,” the government considers it an administrative action. Immigration laws are primarily enforced through civil proceedings, not criminal prosecutions. Detainees are called respondents, not defendants. Yet in practice, according to human rights advocates, civil immigration detention has become as punitive as criminal confinement.

Though law enforcement is legally barred from entering someone’s home or parts of their workplace without a judicial warrant, immigration officers find ways to sidestep this requirement. Almost invariably—99.9 percent of the time, Angel said—ICE serves an administrative warrant, which holds no legal weight, as opposed to one signed by a judge. With physical force or displays of weaponry, they coerce people into letting them inside their homes or businesses and claim in court that the detainees consented to the search.

Using these kinds of dubious tactics, federal immigration agents detained a record high of about 400,000 people a year under Obama. Roughly 35,000 of these people lived in the Bay Area. Since President Donald Trump took office, deportations have intensified and expanded to people without criminal records.

“This is not something new,” Angel said. “This was happening under the Obama administration. … But if there’s one silver lining in the Trump administration, it’s that it pulled the mask off these injustices.”

The legal training is part of a broader initiative called the “solidarity network,” which aims to protect targeted community members. More than 70 South Bay churches and other religious congregations have joined the network by pledging to provide shelter and basic services for families impacted by immigration enforcement.

Throughout the training, Angel talked about his personal story and invited others to share theirs. He asked what brought people to the workshop that day.

“I need to know that I’m on the right side of history,” one person replied.

About a dozen people chimed in.

“I’m an old white guy and my values are closer to immigrant values than to the guys that are supposedly running this country.”

“Because no human being is illegal.”

“As a Vietnamese refugee, I was given a chance to come to this country. I want to make sure that other people have the same opportunity I did.”

“As a person with white privilege ... I want to use my privilege to help.”

“I believe that ICE makes our communities less safe. Because when people are scared, they’re less likely to report actual crimes that happen.”

“To prevent families from being divided.” 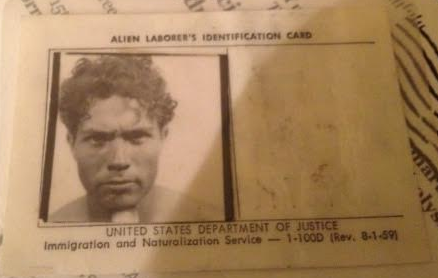 Jaime Zesati keeps a photo of his dad's alien ID card on his cellphone.

Jaime Zesati, the son of unauthorized immigrants who received amnesty in the 1970s and became citizens in the 1990s, said he wanted to translate his solidarity to action in honor of his family history.

After the training session, Zesati recounted how his father initially entered the U.S. legally as part of the Bracero Program, which imported millions of Mexican guest workers for seasonal work between 1942 to 1964. In 1961, at the age of 23, he received his alien identification card and worked three to four seasons before the federal program ended for good.

Many braceros stayed after their guest visas expired, running the risk that La Migra would show up at worker camps and round them up. Others, like Zesati’s dad, would go back and forth between their families in Mexico and better-paying jobs in the U.S.

“In 1963, my dad crossed the border illegally for the first time,” Zesati told San Jose Inside. “He crossed the desert ... and found work in restaurants and the fields, but was deported at least three times. In 1968, he paid for passage for my mom, who crossed through a drainage tunnel that ended in San Ysidro. She doesn’t like to recount that trip.”

The couple lived and worked in Los Angeles before putting down roots in the Bay Area, where they eventually had 10 children. Zesati keeps a photo of his dad’s alien ID on his cellphone. The card issued by the Immigration and Naturalization Service shows the young bracero scowling, his eyebrows knit and mop of curls askew from government health inspectors checking for lice.

“Although I’m the son of undocumented immigrants who strove to obtain legal status, I sometimes feel far removed from their struggle,” Zesati said. “I feel like posting and sharing online isn’t enough for me anymore. I needed to take tangible action.”