Scroll from the bottom up to read in chronological order. And click here to catch up on the rest of our police protest coverage.

The Santa Clara County Superior Court will be closed Monday in response to the citywide curfew. An email from Presiding Judge Deborah A. Ryan announced that all South Bay courthouses will remain closed for the day.

“With consideration for the safety of the public, our judicial officers and employees, I have made the difficult decision to close our courthouses tomorrow,” she said. “We will closely monitor circumstances in Santa Clara County and the City of San Jose and continue to act in the best interests of our community and public safety going forward.”

Santa Clara City Manager Deanna Santana has instituted an 8:30pm curfew in the Mission City due to “civil unrest” in San Jose.

According to a news release sent out minutes before the curfew went into effect, city officials were concerned about nearby “looting and rioting.”

“Santa Clara and San Jose have shared city borders where both Westfield Valley Fair and Santana Row shopping districts are located and have been identified as locations of potential interest for protests and raids,” the release read. “At this time of issuing this release, there is already credible activity in the area.”

The curfew will mirror San Jose’s and run from 8:30pm until 5am until further notice.

SJI has been down the last few hours, but we’re finally up and running again.

While we were away, Mayor Sam Liccardo, City Manager Dave Sykes and police Chief Eddie Garcia held a news conference about the new curfew, which will go into effect at 8:30pm and run until 5am every day until next week or until city officials take further action—whichever comes first.

“As these protests run into the third day we have seen too many episodes of the few taking advantage of this moment to exploit these protests despite the very peaceful intentions of the many,” Liccardo said.

Sykes clarified that essential workers, medical personnel and members of the news media are exempt from the order. Garcia explained that the curfew is a “useful tool to mitigate further violence and property damage.”

Liccardo also finally broke his silence on San Jose police Officer Jared Yuen, who was caught on video antagonizing and swearing at protestors on Friday. The mayor called Yuen’s behavior “particularly disturbing” and said “his conduct [is] in sharp contrast with what was otherwise overwhelmingly admirable professionalism in our department.”

Garcia said he spoke with Independent Police Auditor Shivaun Nurre and will make sure the incident is investigated properly.

“I know Jared and he’s a good kid who made a mistake, who let his emotions get the better of him,” Garcia said. “He’s put his life on the line for this police department many an occasion and so we’ll take all of that into consideration. He will have to live with the consequences of what he did but I can guarantee you Jared’s embarrassed.”

4pm: A show of solidarity.

Olympian Alvin Harrison spoke with SJI about how much it meant to see the mayor bend a knee in solidarity with protestors. (By the way, excuse the typo on my video up there. It was edited in a hurry. His surname is Harrison, not Harris.) 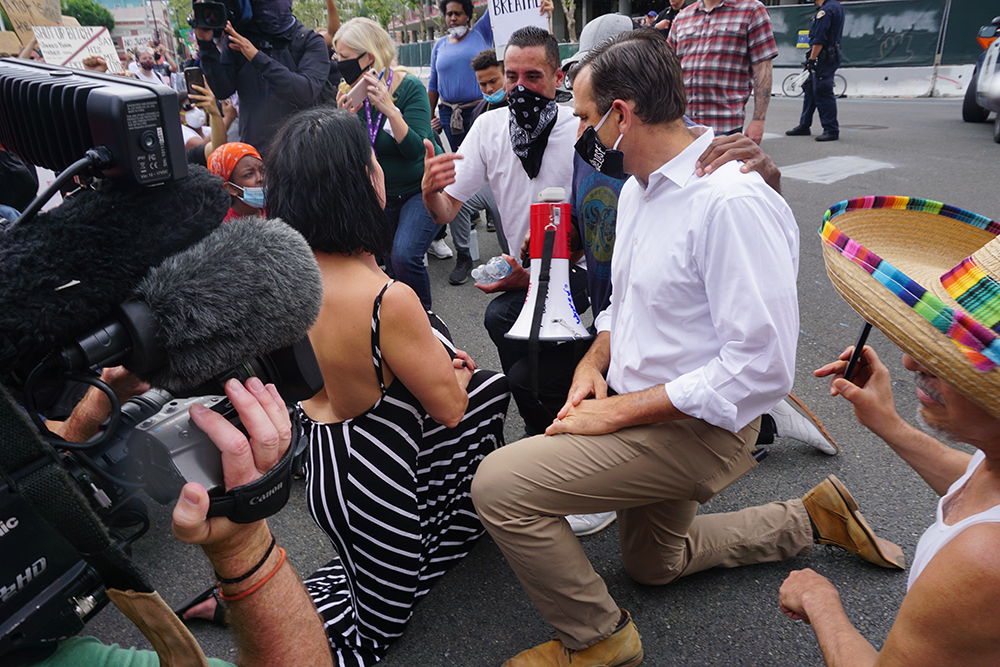 The moment marked the first time the mayor directly engaged with protesters since the George Floyd demonstrations began a few days ago in downtown San Jose. (Photo by Jennifer Wadsworth)

Mayor Sam Liccardo finally descended from his 18th floor office for some face time with protesters, who chanted “take a knee” for several minutes before he finally obliged.

Two-time Olympic medalist sprinter Alvin Harrison announced the moment through a megaphone. “The mayor has agreed to take a knee with me right now in support of George Floyd,” Harrison said, “and with all of us. ... Just for five minutes, take a knee with us so that we know you stand with us in solidarity.”

With a row of cops behind him and hundreds of protesters before him outside City Hall, the mayor—clad in khaki pants, a white button-down shift and a San Jose-branded face mask—bent his right knee to the asphalt and bowed his head.

The gesture elicited cheers and applause. After Liccardo stood up to make his way back to City Hall, protestors began directing their “take a knee” chants back at the cops.

San Jose officials have implemented a citywide curfew for the next week. The curfew will go into effect at 8:30pm and run until 5 am. Mayor Sam Liccardo, City Manager Dave Sykes and Chief Eddie Garcia are expected to provide more details this evening. 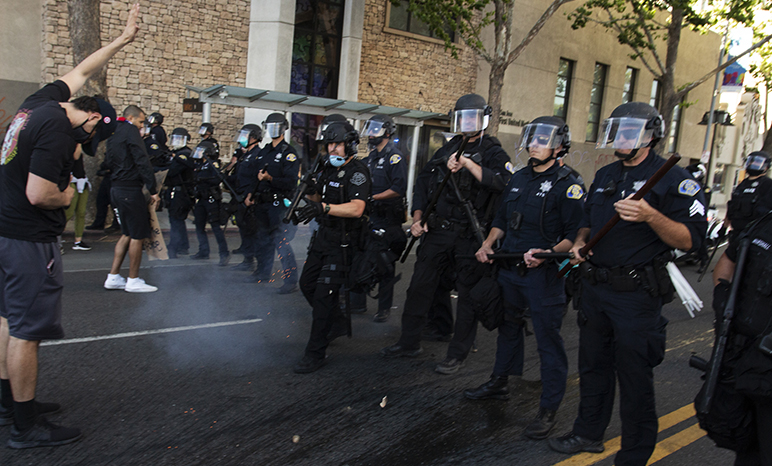 Before we head into another protest, here’s a look at some stats from the past two days.

SJPD told us it assigned 327 officers to the Friday protest, which drew somewhere north of 1,000 at its peak. It tapped 91 people from 13 outside agencies to help with the effort and made 38 arrests by the time the march was all said and done.

One officer was injured. Though the department offered no details about what happened, the incident unfolded in full view of the camera, showing that the officer snatched a cellphone from a protester and chucked it into the crowd. The protester responded with a quick blow to the face, and the officer slumped to the ground—out cold.

Meanwhile, eight patrol cars were vandalized. The only major incident mentioned by SJPD in response to our query was the SUV that drove into a crowd of protesters, injuring two. The driver was arrested a day later.

On Saturday, SJPD assigned 196 officers to the protest at City Hall and tapped 39 people from just one outside agency (the Santa Clara County Sheriff’s Office) for help.

Despite a much smaller crowd size compared to the day prior, police made 50 arrests.

When this news outlet asked for names of people arrested and why police detained them (information that other cites promptly provided to news media), Officer Gina Tepoorten said she has to process the query as a formal records request. That means we probably won’t hear more for at least another 10 days.

If you or anyone you know was arrested or detained—or has anything you want to share about an interaction with SJPD—feel free to email me at [email protected]. You can also find me on Twitter and Signal.

Meanwhile, click here to learn how to file a complaint with the San Jose Independent Police Auditor (IPA), a civilian watchdog that can only investigate specific officers or incidents if a member of the public asks them to do so. If you’d prefer to remain anonymous, try this option, which routes the data back to the same office.

In a phone call earlier today, IPA Shivaun Nurre said her office will catch up on scores of missed calls and emails this week. As someone tasked with investigating those incidents, she refrained from commenting about any directly.

But she said it would be a good idea for me and other members of the public to study up on SJPD Duty Manual Section L 2300, which governs how officers must respond to demonstrations and civil disturbances. To download a copy of the manual, click here.

Since I’m already late to the march, I’ll sign off for now. But check back for photos and updates I send to my colleague Grace Hase. Stay safe, folks.

Members of the River Church Community will convene a third march in San Jose against the killing of George Floyd. It starts at 3pm today at City Hall. Details are posted here.

For those who want to observe from afar, organizers plan to broadcast at least some of the event on Facebook Live. The planned route: counterclockwise around City Hall from Fourth to San Fernando and then Sixth and Santa Clara streets.

Organizers plan to repeat the route eight times, like the Biblical march around Jericho, and one for each minute Floyd was choked to death by Minneapolis cop Derek Chauvin.