Beyond the red steel gate to the 4A pod in Santa Clara County’s Main Jail, a dozen cameras keep watch of 45 locked-up men.

For as long as anyone can remember, jailers and jailed alike have called this notoriously volatile maximum-security unit “The Snake Pits.” So named because of the way inmates would thrust their arms through the bars and wave them around like so many frantic vipers. Sheriff Laurie Smith, flanked by her assistant sheriff Troy Beliveau and spokesman Sgt. James Jensen, walks up to the door’s blast-proof pane to point out where a 30-man brawl erupted earlier this month.

“The more you let them out together,” Smith says, “the more fights you’re going to have,”

And yet, despite the unit’s fractious reputation, the jail recently revised its policy to allow more inmates out of their cells at once, resulting in a March 3 melee. That the brawl played out on cameras a day after their installation and a week after the policy change, jail officials say, is coincidental. The timing of the scrap—right after the sheriff made headlines for buying the cameras with her personal credit card—raised suspicions of a set-up.

“Do you guys believe that I staged this for publicity?” Smith scoffs. 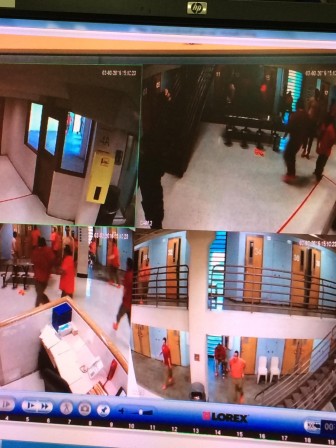 That prominent members of the public suspect as much shows how badly a series of high-profile scandals, including the fatal beating of a mentally ill inmate, have tarnished the sheriff’s image. This past weekend, a jails commission—formed after three guards were charged with murdering Michael Tyree—asked the county to wrest control of the jails from Smith.

“You have racism and constitutional violations coursing through the system,” says Rick Callender, a commissioner and vice president of the California-Hawaii State Conferences of the NAACP. “I really do want federal oversight of these jails. Heads need to roll.”

Tyree’s Aug. 27 death prompted the county Board of Supervisors to assemble the Blue Ribbon Commission on Improving Custody Operations to investigate the two jails under the sheriff’s purview. The Prison Law Office, a nonprofit watchdog, followed up with a lawsuit accusing county corrections of over-using solitary confinement and failing to provide adequate medical and mental health care for the 3,600 people in its custody.

Sheriff Smith has since faced unprecedented public criticism. An internal probe uncovered a slew of racist text messages exchanged by at least a dozen of her jail deputies, leading to the correctional union's president being placed on paid leave. Shocking accounts of brutality against inmates have also come to light, and consultants exposed glaring failures in the way the jails handle inmate grievances and staff discipline.

Just this week, the Deputy Sheriffs' Association—which represents not correctional but patrol officers—asked county counsel to investigate the sheriff for misconduct. The union claims Smith leaked info about a personnel investigation and tried to influence LaDoris Cordell, the retired Superior Court judge who leads the jails panel, by saying that demands for a leadership change could hurt her political prospects. If Smith did say as much, it had little effect.

Leading up to the vote, the group lambasted Smith’s efforts to fix the jails as reactive, a way to save face and brand herself a reformer ahead of her likely re-election fight in 2018. The correctional guards’ union, which has been at odds with the sheriff since she took over the jails in 2010, accused her of excluding input of her custody staff.

Cordell has repeatedly sparred with Smith in the press, labeling her leadership deficient at every level.

“The problems range from, but are not limited to, mismanagement of the Inmate Welfare Fund, a broken grievance [and] complaint process, a flawed classification system, a broken medical and mental health system for inmates, a problematic custody input report process, a fear of retaliation by both correctional officers and inmates, a stunning lack of transparency in the jail operations, and the murder of Michael Tyree,” Cordell wrote in demanding new jail management. “The Board of Supervisors should acknowledge that the operation of the jails under the current leadership has been a failure for the inmates, for the correctional officers, and for the taxpayers.”

Ironically, Smith asked the county to establish the panel that ultimately came out so strongly against her. Commissioners nearly censured the sheriff before settling on a public denouncement that also implicates her corrections chief, John Hirokawa. 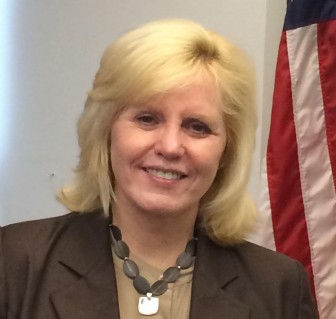 In the seven months since Tyree’s killing, the sheriff has cited several improvements at the jail. Last week, she introduced a reform plan that in some ways aligns with the commission’s recommendations, including a call for a full-time jail monitor.

Still, Smith has been sharply critical of Cordell, the commission—of which she’s a non-voting member—and the unions that represent her deputies.

Days before the panel’s final meeting, Smith said she had yet to read the final agenda, but bristled at Callender’s idea for federal intervention.

“You know, I don’t think that is the purview of the blue ribbon commission,” Smith says.

During a conversation with San Jose Inside after a tour of the jail last week, the sheriff appeared frustrated when talking about certain commissioners and their continued discussion about the 4A brawl. The timing of the cell block fight was happenstance, Smith says. In fall of 2014, following a series of racially charged fights in that unit, Lt. Timothy Davis updated the schedule to make sure African American and Hispanic inmates took turns out of their cells. Last month, he changed course.

“Recently, we reexamined the 4A program schedule,” he wrote in a Feb. 25 email that became the center of a 45-minute discussion during Saturday’s commission meeting. “Based on feedback from the fourth floor staff, and support from Classification–Intel, Main Jail admin determined the 2014 six-group schedule is obsolete.”

Six days later, Smith bought the surveillance cameras at Costco. The $761-and-some-change went on her personal charge card, ostensibly to cut through government red tape. Exactly a day later, per Jensen, a black and Latino inmate clashed over a gambling debt and set off the whole unit. It took 20 correctional deputies and several cans of pepper spray to break up the fracas.

“Questions need to be asked about why these inmates were let out,” Callender tells San Jose Inside. “Whether the inmates were put together knowingly or negligently, this supports the call for federal oversight of these jails. We’ve got problems of management and leadership, which creates this kind of festering cesspool of activity.”

In a roundabout way, Smith blames the “Snake Pit” brawl on the class-action lawsuit demanding less solitary confinement and more time out of cells.

“But please,” she says. “Do not think for a moment that someone staged the fight for the media. That is ludicrous.”

Attempts to improve jail conditions have been met with resistance or suspicion, Smith contends. While commending “the vast majority” of deputies for being dedicated public servants, she called their unions obstructionist. She used an analogy that San Jose Inside's own reporters could be fired on a moment’s notice but she has to deal with “civil service protections.”

When the sheriff installed new locked boxes for inmate complaints, the jail guard union sent a letter demanding to "meet and confer" over the matter. When she set a new schedule in the Main Jail’s eighth-floor mental health ward, she says, the union sent another such letter.

“Change in any industry, especially culture change, really takes time,” Smith says. “But it also takes people not working against you.”

The frustration is mutual. Union officials say they want to see those changes, but take issue with the way they’re handed down.

“The problem is that the sheriff is being obstructionist and slowing progress by making unilateral decisions that exclude us,” says Julio Alvarez, who leads the correctional guards union. “That won’t work. We are the men and women who are put in harm’s way each day. If the sheriff worked with us—on installing cameras, on not cutting first-line officers out of the grievance process, on not eliminating shift briefings, on replacing deficient online training with hands-on training, on adding correctional officer positions where they’re critically needed—then we would make good progress toward making our jails safe for everyone.”

The correctional union’s representative on the jails commission, however, wants the sheriff to keep her post to enact promised reforms. Sgt. Amy Le on Saturday defended Smith, who had to make cuts in the wake of an economic downturn. Fellow commissioners Pablo Gaxiola, a former inmate, and Judge Stephen Manley, who presides over the local mental health court, agreed with Le.

Ousting the sheriff wouldn’t be the most sensible approach because she’s an elected official, Supervisor Cindy Chavez, Smith's political ally, remarked during the meeting. Regardless, Smith says, many reforms are well underway. Inmates have more soap, underwear changes and out-of-cell time. More psychiatrists and psychologists have been placed in both jails. Riot guns will no longer be used on mentally ill inmates to force them from their cells. And guards now hold squad meetings before each shift to go over training, policy and updates about inmates.

“Yeah, they’re calling for a change of leadership,” Smith says. “They’re saying that this is the worst jail system in the world. I think people forget that this was a murder by some deputies in this facility and that we had them arrested within a week. So people forget why all this started. Yes, there’s a lot of scrutiny in the jail, and we welcome that scrutiny. I want to be looked at. I want to look at things and look at how we can prevent this in the future.”

In a letter to Cordell and the commission, Tyree’s sister, Shannon Tyree, thanked them for their work.

“Michael would understand the kind of courage shown by public officials who have stood up and said, ‘We have a problem and we’re going to fix it,’” she wrote. “He would be honored by the real work that is being done in his name by this commission to make not just his death, but also his life, leave a lasting change.”

Reforms in this county, she added, will hopefully reverberate in jails throughout the country.

“It wouldn’t be the first time that California has started change that has led the nation,” she concluded. “Californians are very good at that.”