Just south of Spartan Stadium, a concrete shoebox sits near a parking lot full of vehicles festooned with Ron Paul and NRA bumper stickers. The sound of gunfire snaps loud and crisp, ricocheting off of cinder blocks and out the door to a couple of shaded picnic tables. Walking up, it’s difficult to avoid blinking every time a round cracks. Welcome to the Santa Clara Valley Rifle Club.

Inside, baseball-hatted and bespectacled old white men look down on the range. These are the "lifetime members" of the local rifle club, immortalized in pictures yellowed with age, high on the wall. But they aren’t the brand of gun enthusiasts who currently occupy the Club, notwithstanding their shared preference for libertarian adhesive strips on their tailgates. The shots fired come from the Pink Pistols, an informal LGBTQ meet-up group that leases out the rifle club once a month for target practice.

“If you’re tolerant and respectful, I keep my group open,” says Nicole “Nikki” Stallard, a middle-aged transgender woman and founder of the Pink Pistols. She invited me to talk a little Second Amendment and shoot some guns. I accept a Glock out of an assortment of pistols, take aim and fire, poorly. It’s not the first time I’ve shot a gun, but the pistol’s heft is always surprising. It requires a firm grip, and in return it delivers satisfaction. 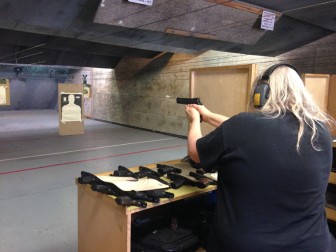 Sitting on picnic tables outside the club, Stallard gives me a history lesson on concealed weapon permits that starts with slavery and Dred Scott. She has the spiel on guns rights memorized like the Pledge of Allegiance. When asked how many guns she owns, she pauses thoughtfully. “Good question,” she says, “I’d have to count them.” Brushing aside her long silver hair, Nikki talks about “people out there whose hearts are full of hate." She talks about the people who should really be afraid: Women; black men; gays, lesbians, bisexual and transgender. Stallard does not worry so much about the dope fiend, gang banger or burglar who sneaks through the window in the dead of night, so much as “dealing with predators.” She founded the Pistols in the early 2000s, naming the group after a Salon.com article that urged the LGBTQ community to arm itself against hate crimes and people who “view the LGBT community as easy targets.”

No group is targeted at a higher rate for physical hate crimes—as opposed to property hate crimes—than LGBTQ, according to the Southern Poverty Law Center. Data on violence against trans people, specifically, is difficult to come by, but most experts assume incidents go widely underreported. One of the few large studies focusing on transgender discrimination, conducted by the National Gay and Lesbian Task Force, reported in 2011 that 61 percent of trans people surveyed were victims of physical assault, and 64 percent had been subjected to sexual assault. A survey two years later by the National Coalition of Anti-Violence Programs found that 13 of the 18 homicides associated with LGBTQ hate crimes that year were trans women; 14 were black.

But people from these populations are not the activists interested in expanding gun rights.

“By and large, if you think about contemporary modern [gun rights] movements, those have all been overwhelmingly white, male and conservative," says Pratheepan Gulasekaram, a Santa Clara University professor who specializes in the Second Amendment as it applies to non-citizens.

The current face of the fight for greater access to guns in California fits the description. Edward Peruta is a white man in his mid-sixties who bears a startling resemblance to the men immortalized in the rifle club. He’s a serial litigant in multiple states, the type to sue the city of Hartford, Connecticut, because parking meters “infringed on his freedom to travel,” according to one article. He would blend in seamlessly at an NRA press conference or Tea Party rally, and there’s a chance he could become their champion if a lawsuit he filed survives the appeals process. A successful Peruta challenge would cause a stark shift in how concealed weapon permits are granted in California. Estimates state the total number of people secretly armed would increase to nearly 600,000 within a year. The current number is estimated at around 70,000.

Nowhere is the clamor for greater gun access more apparent than in Silicon Valley. Extensive records requests San Jose Inside filed with law enforcement agencies across the Bay Area show that the Santa Clara County Sheriff's Office has become ground zero for concealed weapon permit requests. The sheriff’s office experienced a 9,000 percent jump in the number of requests in 2014, leading it to put a moratorium on issuing permits. Lawsuits, similar to Peruta’s, have since been filed against the county.

While the cases focus on the constitutional right to carry concealed weapons, perhaps more substantive questions need to be asked: What will the future hold if everyone is armed? Do more guns make us safer? And why are people in Silicon Valley so afraid?