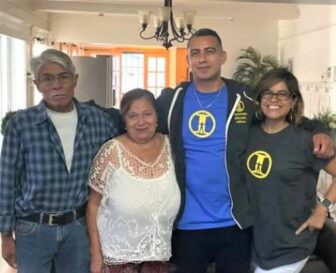 Arturo Jimenez, second from right, celebrates with his family, after being freed from 26 years in prison for a crime he didn't commit. Innocence Projecd photo

These are just a few of the 33 clients whose wrongful convictions the Northern California Innocence Project (NCIP) has helped overturn since 2001.

This year, the NCIP,a nonprofit program run through Santa Clara University School of Law, is celebrating 20 years of advocacy, policy reform and education.

In the past year, it has secured the release of three more clients: Juan Batista, who was incorrectly identified as the shooter in an attempted murder; Clifton Jones, a father who was unjustly convicted in the accidental death of his infant child; and Arturo Jimenez, who spent 26 years in prison for a crime he didn't commit.

The project works as follows: First, it identifies individuals convicted in California who can show substantial support for a claim of innocence. Once the program accepts a new client, a team of law students, lawyers and volunteers review new and existing evidence, collecting proof for the client's claim. After sufficient evidence is obtained, the team first negotiates with district attorneys to overturn the conviction. If negotiation fails, the NCIP moves forward with litigation.

The process is painstaking, rigorous and often overwhelming; even under the best circumstances, a case can take years to resolve. But SCU Law Professor Linda Starr, co-founder and executive director of the NCIP, finds inspiration through the clients themselves.

“I cannot fathom summoning the grace that they exhibit,” she said. “They're amazing demonstrations of the resilience of the human spirit.”

One such individual is Arturo Jimenez, a Los Angeles County resident who was falsely convicted of murder in a 1994 shooting. Despite multiple witness testimonies indicating he wasn't the shooter, his trial attorney failed to present the jury with any exculpatory evidence. (The trial attorney was later disbarred.) At the age of 18, Jimenez was sentenced to 30 years to life.

“I must've written 200 lawyers, law firms, law schools. I filed 14 or 15 petitions, and they were all denied,” said Jimenez, now 44. “There were years when I didn't have hope. I convinced myself that not everybody was meant to be happy.”

But in 2012, Jimenez reached out to Ellen Eggers, a deputy state public defender who had helped clear other inmates of their charges. She agreed to take on his case, teaming up with NCIP attorney Paige Kaneb and Morrison & Foerster, a leading international law firm, to help prove his innocence.

On August 12, 2020,26 years after Jimenez was charged for a crime he didn't commit, his conviction was overturned. Six months later, the Superior Court of California in Los Angeles County found him factually innocent.

“I had like nine attorneys working on my case,” Jimenez said, laughing. “It felt really good to finally have somebody listening to me, to have people really concerned about justice behind me. Paige, Ellen Eggers -- they even became my friends. They're still in my corner. I'm really grateful for them and what they have inside their hearts.”

Cases like Jimenez's and last summer's protests against racial injustice have inspired further backing for the NCIP’s work, with the program receiving more than $3 million in pro bono services from lawyers and investigators every year, and counting more than 130 active volunteers. Although it is not primarily a racial justice organization, the NCIP recognizes that “racial justice is inextricably intertwined in all aspects of the criminal justice system,” said Starr.

In this vein, the NCIP takes an active role in advocating for policy reform and public education, helping push through new laws such as the recently passed California Racial Justice Act that prohibits the use of race, ethnicity and national origin in jury selection, sentencing and convictions.

“I see the (Racial Justice Act) as a turning point for California,” said Starr. “It’s going to turn the justice system on its head -- as it should. I'm excited for us to be a part of that.”

The shift in public support for the NCIP's work represents a sharp contrast to the skepticism that it first received when it launched in 2001.

“We were challenging a system in ways that the players in that system didn't even want to contemplate,” said Starr. “The notion that there were innocent people convicted in California was rejected by some people. They were wrong, of course.”

As for Jimenez, he is staying busy, spending time with his parents, working for Prison of Peace, a nonprofit that teaches inmates communication and conflict resolution skills, traveling across the U.S. and enjoying the simple, ordinary things, like trips to the beach.

“The ocean, man. That's one of the most beautiful things,” he said. “That's what freedom looks like.”

Casey Cantrell is a reporter with Bay City News. This story was first published on LocalNewsMatters.org, an affiliated nonprofit site supported by Bay City News Foundation.