SEIU Local 521 called the action, which union spokesman Victor Gamiz said may involve up to 700 workers participating at a dozen county sites.

In a notice to members late Tuesday, the union announced the strike because of the county’s “refusal to bargain in good faith over the reorganization of work in the Department of Family and Children’s Services.”

The bulletin listed the Public Defender’s Office, fleets, roads and airports and San Jose Family Resource Center as taking part in the action.

County Executive Jeff Smith held a press conference this morning at the Sheriff’s Office on Younger Avenue to address the work stoppage and announced that his staff will post updates about the strike online as it proceeds.

However, he said, “we’re not aware of any significant client services that’s impeded.”

Smith said the county will make sure that services continue to be provided despite the work stoppage. “We want to assure our residents who rely on the county that we have contingency plans in place,” he said in a statement emailed to reporters. “Services will continue to the greatest extent possible during an SEIU strike. We remain committed to providing critical services to the community.”

Smith assured that the county has sent officials out to monitor affected sites. He disputed the union’s estimate of the number of strikers, saying that 150 workers participated today—most of them from the the roads, airport, facilities and fleet divisions. 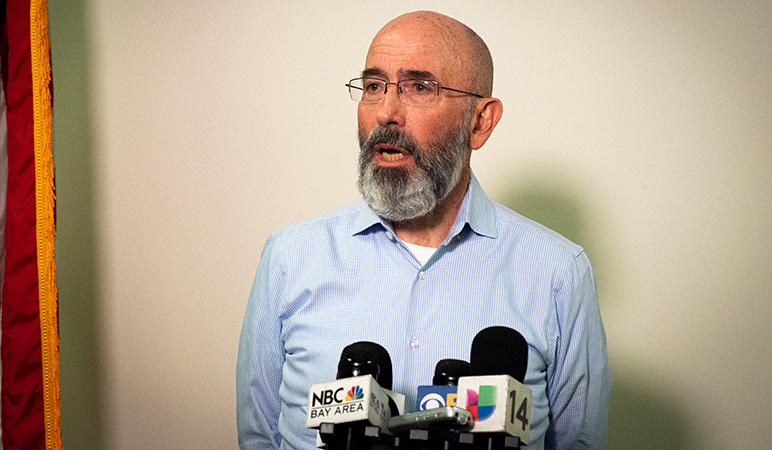 Smith said the protest stems from a dispute over salary increases as part of a negotiation process that began five months ago—although the union’s contract expired in mid-June.

“There has been a difference of opinion between the county and SEIU about the projection of revenue in the future,” he explained in a news release issued ahead of the presser. “The county is very concerned about an economic downturn and slowing revenue growth. The county is not only worried about a fair wage and an equitable contract, but also making sure the contract and associated salaries are sustainable in the future. The union has focused on recent revenue trends that were stronger, but future revenues are not expected to be nearly as strong.”

Smith said the county will “continue to negotiate in good faith,” but that the SEIU’s latest proposals are “unsustainable.”

According to officials, the county offered SEIU a 3 percent general wage increase each year for the next five—an incremental budgeted cost of at least $570 million. Additionally, the cost of non-general wage hikes would account for another $55 million, Smith said. All together, the latest proposal put forth to SEIU would cost $625 million over the course of five years. If the plan was replicated to the rest of the county’s unions, that would exceed $1.5 billion.

SEIU declined to disclose details about its counter-offer when asked by this news outlet.

“Presumably, they’re not disclosing their offer because they’re embarrassed by it being too high,” Smith told San Jose Inside.

According to Smith, the union’s proposal involves a three-year wage increase, with a 6 percent raise the first year followed by 5 percent hikes the next two consecutive years. They also proposed wage increases even higher for some job classifications. “It’s more than double compared to our offer,” Smith said.

SEIU has accused the county of reorganizing the Department of Family and Children's Services without first consulting employees who would be affected by the change.

“This is an unfair labor practice strike based on Department of Family and Children's Services director conducting a reorganization of the agency without employee input,” Valerie Pickering, a social worker supervisor at the department said.

Pickering said the union is also sounding the alarm about the county deciding to relocate the DFCS family resource center, a move seen as precursor to shutting the place down entirely. “They’re not being forthcoming,” she said. “They’re saying it’s a relocation. But it's not going to resemble anything that we have right now. The services will collapse. We are calling it a closure.”

“It’s not closing.” he insisted. “It’s a simple move from one location to another. That’s not an unfair labor practice. Any of the other things you’re told about decreasing and closing services, damaging individual clients—that’s just hyperbole.”

He said the county had encountered issues with the landlord at the family resource center, and that’s why the county is moving it to another location.

The true reason for the strike, Smith alleged, has nothing to do with unfair labor practices. “It’s so disappointing to have union leadership not being honest with their members and telling them that we have money that we don’t have,” he said. “The reason for this is because of the Janus decision.”

The Janus decision is the the 2017 Supreme Court ruling Janus v. American Federation of State, County and Municipal Employees when the court shut off a crucial stream of revenue for public employee unions: mandatory fees from non-members.

Unions now feel greater pressure to prove their worth, Smith argued. “The way to prove that they’re valuable is to treat employees and their members fairly,” the county boss said. “While they’re out on strike, members are losing money and their not able to benefit from the 3 percent raise that’s on the table. It wasn’t too long ago that we were called ‘Santa Claus County’ because we’re very, very, very, very caring towards our employees.”

Many social workers have been working mandatory overtime for five years, she noted. They’re commuting two hours to work. And all too often, they work 10-hour days with unpredictable schedules. For the union to return to the negotiation table, Pickering said the county must conduct a study to evaluate appropriate workloads and address the poor labor conditions endured by social workers.

Smith said the union argument is misleading. “That complaint has been consistent for the last 20 years,” he said. “We’ve addressed it numerous times—all kinds of workload studies. We won’t conduct workload study unilaterally. We will conduct it if we come to an agreement at the table ”

With the economy apparently verging toward a recession, Smith said the union’s demands are simply unworkable.

“This strike is a face saving effort from union leadership,” Smith said. “They erroneously convince their members that the county has $1 billion sitting in some drawer.”