Two decades after California sanctioned marijuana as medicine and a year out from possibly outright legalization, Gov. Jerry Brown approved a plan Friday to regulate the world’s largest cannabis industry.

Spurred by the threat of a ballot initiative to make California the fifth state allowing general adult use, the Legislature introduced a trio of bills endorsed by law enforcement, the cannabis industry, labor unions and local governments. The triple-joined AB 243, AB 266 and SB 643—if one passed, they all passed—marked the first time state lawmakers effectuated a pot policy since SB 420 in 2003 let patients and caregivers form collectives.

The sweeping package signed into law just before Sunday’s deadline will transform California’s billion-dollar medical pot sector with a complex multi-agency system of testing and licensing.

For the first time, the industry, until now limited to nonprofit co-ops, can legally turn a profit. Weights and measures, labeling, safety, pesticides and distribution will be strictly monitored. A new Bureau of Medical Marijuana Regulation run by a governor-appointed “weed czar” will oversee everything from growth to production, transport and sale.

“This gives us enormous momentum,” says Dale Sky Jones, who leads the ReformCA initiative, a measure expected to rally some of the biggest pro-pot players. “We can finally start to undo some of the damage brought upon us by the prohibition.”

But for the immediate future, at least, not much will change.

Many of the just-signed state rules won’t come into effect until 2018, and the details have yet to be crafted. They largely reaffirm local control and grandfather in existing ordinances. Since the state’s Compassionate Use Act legalized medical pot in 1996, the industry has been governed by a patchwork of local rules while remaining illegal under federal law. Following the passage of SB 420 in the early aughts, dispensaries and grows proliferated as cities and counties struggled to maintain order and oversight.

Now, with unprecedented guidance from on high, some cities may re-think their bans, while the ones that allow them under strict limitations will have to decide whether to tweak local rules in reaction to California's inaugural marijuana bureaucracy.

San Jose, the only South Bay city to permit pot clubs, may revise some of its year-old ordinance. Santa Clara County, which enacted a regional policy this month, expects to make only minor adjustments to mesh with the state’s incipient pot policy.

“Fortunately, our ordinance already falls in line with what the state’s doing,” says Sylvia Gallegos, a deputy county executive who helped author the policy. “We’re already moving in the right direction.”

San Jose, for its part, enacted a regulatory framework in 2014—a few years after the City Council tossed out a prior ordinance under threat of referendum—that bans pot shops from all but 1 percent of the city. The number of collectives has since dropped from 78 to 20 still vying for the city’s blessing. Five disqualified clubs have sued over the restrictions; others were slapped with massive fines.

While the state will uphold local law, its new guidelines appear to contradict a provision in San Jose’s ordinance requiring collectives to grow and make all their own products. To comply with the city, many dispensary owners teamed up with other operators and investors and shelled out hundreds of thousands of dollars this past year to move into facilities with commercial kitchens and enough space for an on-site farm. That closed-loop model—or vertical integration, in bureaucratic parlance—was meant to make it easier to regulate the plant from seed to sale in the absence of state oversight.

“That was a bad piece of legislation,” says John Lee, who lobbied against the city ordinance and has now channeled his energy into a grassroots initiative called the Marijuana Control, Legalization and Revenue Act of 2016, which would reset municipal regulations. “It’s prohibitively expensive to comply.”

Under state policy, a collective up and running by this year can continue as is. Although, statewide licensure will eventually limit on the number of large cultivation ops—the only kind San Jose allows.

"Our medical cannabis rights, protected for nearly 20 years by Prop. 215, have been hijacked and Prop. 215 is under attack like never before," AMMA director Steve Kubby, said in a statement announcing his intent to overturn the new regulatory scheme. "The new law is an unacceptable."

Regardless of how things shake out in court, policymakers—given the raft of legalization initiatives jockeying for space on the 2016 ballot—have to consider how to lay the groundwork for a future recreational market.

“We wrote our measure to complement what came out of the Legislature,” Jones says. “We want it so that if you jump through hoops in the medical market, you qualify to participate in this parallel adult use sector.”

Reformers hope a 2016 ballot measure could pull support from the younger, progressive voters who tend to turn out for a presidential election. A challenge for the industry will be to unite around a single initiative. Big donors have taken a wait-and-see approach, holding off an endorsing one of the several measures until proponents file final drafts.

“If we lose at the ballot, it wouldn’t be because voters aren’t ready for legalization,” Jones says. “It would be because the activists couldn’t get their act together.”

Thankfully, there’s an air of inevitability now that Alaska, Colorado, Oregon, Washington and the District of Columbia have legalized cannabis, says Lauren Vasquez, spokeswoman for the Marijuana Policy Project and co-founder of the Silicon Valley chapter of Americans for Safe Access.

“Voters are ready for this,” she says. “We just need to give them a measure that’s well thought-out and well drafted.” 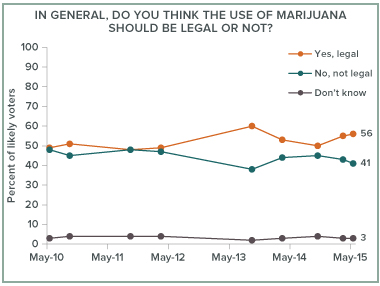 A spring survey by the Public Policy Institute of California (PPIC) found that 56 percent of likely voters support legalizing marijuana for general use. It’s a narrow margin, but a tick up from the split poll when the issue last came to voters five years before.

But success at the ballot, according to PPIC analyst Dean Bonner, will require proponents to make inroads among Latinos, Republicans and older voters.

Given the range of support for the state’s new medical pot regulations—they drew endorsements from Democrats and Republicans, police and pot lobbyists—legalization has been recast as a bipartisan issue.

There’s also greater depth to the conversation compared to the failed legalization push in 2010, Jones adds. Proponents are talking about how to build an industry that welcomes women, minorities and non-violent felons—the ones who bear the brunt of the prohibition but have been shut out under the state’s plan.

“This has always been about civil and social justice and how the War on Drugs disproportionately hurts our communities of color,” says Jones, president of Oaksterdam University, the nation’s first cannabis college. “But the conversation in past years has placed more emphasis on taxation, thinking that the public would be more interested in the money angle.”

Just as the Great Depression hastened the end of the alcohol prohibition, Prop. 19 in 2010 unsuccessfully tried to leverage the opportunity created by a global recession that emptied state coffers by marketing legalization as a way to rake in more revenue. Heading into 2016, Jones says, the message has evolved.

“Thanks to the Black Lives Matter movement and a federal push for criminal justice reforms, the public is more informed about social inequities,” Jones says. “It adds weight to the conversation.”