The gunman in the blue T-shirt with an automatic rifle slung over his shoulder stood in the driveway and demanded that John (not his real name) give him the keys to his black Ford Focus sedan. John appeared to comply, going into the house to fetch a key.

Once inside, the resident of Ben Lomond—a small town between Boulder Creek and Felton in the Santa Cruz Mountains—made a decision on that Saturday afternoon that would affect the course of events for an entire community.

It was his “let’s roll” moment.

John got a key, but it was a set of house keys, not a car key that he handed to the armed man. When the gunman turned to get into the vehicle, John tackled him, knocking the rifle to the ground. He disarmed the man, first knocking a pipe bomb out of his hand, then a pistol. John yelled for help.

A pair of Good Samaritans and a dog named Brown responded just in time.

And so, two hours of terror in the San Lorenzo Valley had ended, thanks to John, two strangers and dog named Brown.

“This was a remarkable, remarkable heroic thing that that resident did,” Santa Cruz County Sheriff Jim Hart told reporters two days later. “This guy was a dangerous and angry man intent on harming police officers, and could have done a lot more damage in our community had that resident not taken the action he did.”

“That resident”—“John”—prefers to remain anonymous, declining all interviews and shunning any recognition as a local hero, as he quietly processes the events of June 6.

Below is an account of those dramatic moments in a driveway off of Highway 9 in Ben Lomond, as told to Good Times/San Jose Inside by two witnesses and the other participant in the throttling of a desperate armed man on the run, plus accounts from John as told to sheriff’s investigators. None of the eyewitnesses knew each other before June 6, except Chris, who is John’s neighbor. They are ... 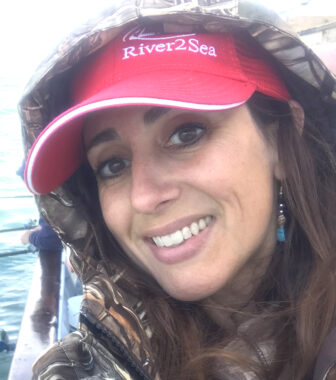 Clara Ricabal, 42, a nurse who lives in Boulder Creek and works in San Jose.

She was driving south on Highway 9 to shop in Felton when she was pulled over near John’s house, because of the roadblock. She shot a phone video of the scuffle and subsequent arrest of Steven Carillo.

Aside from deputies’ body cams, her video is the only known video record of the incident. She is to meet with investigators this week.

Erik Thom, 38, a carpenter who has been out of work for four months. Thom says he was EMT for more than 10 years, and that he and his dog Brown, a 70-pound hound-pit bull mix, have been living in his car for several weeks. Kevin Foster, of Foster Construction in Boulder Creek, saw Thom’s actions in Ricabal’s video on a local community website, and gave him a job.

Thom, like Ricabal, had pulled over to the side of the road because of the Highway 9 roadblock. He is staying in Brookdale, just north of Ben Lomond. He said he wasn't hurt in the June 6 struggle, but he has a cut chin and cut and bruised lip.

Chuck, a neighbor who asked to withhold his surname and who shares a cottage apartment next to the driveway where the altercation took place.

Chuck: I heard someone in my neighbor’s yard. I see the guy up on the fence, jumping over to another house. I see him and he sees me. I didn’t see any weapon.

We’re staring at each other and I’m smoking a cigarette, and he whispers, “You didn’t see me, I’m not here, it’s OK?” and I was just dumbstruck staring at him. He rolled over the other side of the fence and disappeared. I talked to John about it  and told him there’s somebody running through the backyard. Then I went out into the street and saw the road was blocked off. I told the police there’s a guy jumping fences, but they didn’t respond. I figure that by this time, he’s gone, so I go back inside.

Then I hear somebody in the yard again, I hear John yelling “Help” and he’s on the ground wrestling with some guy and I see a pistol in the guy’s hand. I see another guy has run up with his dog, and they are holding the guy there. John really saved the day. 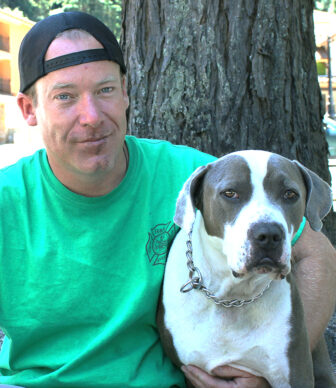 Erik Thom and his dog Brown.

Thom: This suspect was in the neighbor’s yard, and the neighbor has kids, so John told me later that the guy started pressing on the neighbors to get their car, and then John convinced the guy to come over to his yard, saying, “Hey, I’ve got a car for you over here.”

Hart: This guy went into the backyard of a local resident on Highway 9 (just north of the roadblock in Ben Lomond, near Saints Peter and Paul Antiochian Orthodox Church), and the local resident confronted him, wanting to know what he was doing on his property.

The suspect … had an AR-15 slung over his shoulder—he was carrying an AR-15—and he told the resident he wanted his car keys. The resident very calmly went into his house, obtained a key and came back out and handed it to him.

Thom: John gave him a bunk set of keys. When the guy turned around, John got the AR off him, and knocked a pipe bomb out of his hand. He was wrestling with him on the ground. That’s when I let Brown loose and he went gnawing on the guy’s head. And I followed right behind Brown. 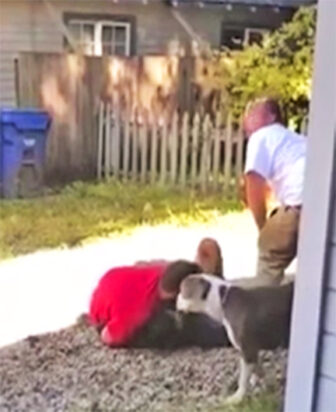 When I got there the pipe bomb was 10 feet or less from where we were wrestling with him, and the AR was like five feet away from us. As soon as Brown got on him, the hand gun went flying.

John was struggling, crying out for help, and I just went right for it because this guy needed some help.

I let my dog go. I took a chance, I gambled with it, because I knew my dog was going to attack one of them—he’s just like that.

I knew he was going to get somebody, and I just said to myself, “Godammit Brown, just get the right person,” and thank God he did.

As soon as the dog got on to that guy, gnawing at his head, he submitted. He was done fighting. John told me later, the guy said, “OK, OK , I’m done.”

I went over and put the wrench on his arm, with John laying on his back. The guy was bloodied all over, not from my dog but from being shot somewhere in the groin area.

I leaned down and was eye to eye and face to face with the guy, and I said, “I sincerely help that you get the help that you need.” Then the cops had him, and they said, “Get the dog out of there,” and I left, and so did John.

At that time, the suspect reached into his pocket and pulled out a pipe bomb and tried to light it—he tried to ignite a pipe bomb while being held down.

Ricabal: I was standing there with Erik whom I had just met, and I saw John come out of his house. Then I turned to video the roadblock about a half a block away, when I heard John calling “Help” four times. And I said, “What?” and I turned off the video and I turned to Erik, and I said, “Where is that coming from?”

And we saw there was somebody on the ground, and I went behind Erik to look and I thought it was a dog, just the way John was lying on the ground, that was the only thing I could think of. I didn’t see the suspect underneath him at first. Then I did a double take, and that’s when I started the video.

I was calling the cops, but no one would come. And I continued the video.

When I went back, I almost stepped on the gun. At that moment, I knew that Erik was already standing on this dude’s hand, and the moment that I saw the dog bite the suspect, I could see his reaction—I saw the guy relax and he stopped fighting. I went over to Erik to see if I could hold the dog while he was struggling, but John told me to stay away.

And I’m looking at the cops, they’re just half a block down the road. They can see me. I’m waving my hands, and yelling, “I’m a nurse, a public health nurse, come help. He has a gun. Get some handcuffs on this guy.”

It was a moment of desperation. Nobody was talking back to me. They were behind their vehicles with their weapons. Then other deputies arrived.

At this point, a Sheriff’s Department Explorer crashes through the fence along Highway 9 next to Thom’s house, another patrol SUV makes a screeching U-turn in the highway and deputies jump out with guns drawn.

Ricabal’s video shows four deputies swarming the three men on the ground, pulling John off and ordering the civilians back, fearful of the pipe bomb lying in the dirt a few feet away. They drag Carrillo out into the edge of Highway 9 and cuff the suspect lying face down on the pavement. They walk him south along Highway 9 a few moments later, and a video by a bystander shows his right leg drenched in blood. It’s over.

John and Thom and Chuck were taken to the police command post next door at Saints Peter and Paul Antiochian Orthodox Church where they would spend the next several hours. Thom’s and Ricabal’s cars were stuck inside yellow tape until Sunday, and some strangers gave them a ride to their homes Saturday night. John’s car was impounded for evidence and he couldn’t return to his house until Monday, June 8, as crime scene investigators scoured the crime scene all day June 7.

Thom started work as a carpenter this week. Ricabal said she has slept with her lights on every night since the incident.

As far as Hart is concerned, John deserves accolades from an entire community. “He does not want to be named, he does not want any recognition, but if I have to drive up there and see him personally, we will give him a commendation, and a citizen’s medal.”

If you know anything in connection with this case, contact the Santa Cruz District Attorney’s Office tip line, at 831.454.2588.