“As a former mayor and council member of the city of Santa Clara, it saddens me to be filing this complaint,” Mahan wrote in a three-page letter to the FPPC, “however, it must be done to preserve fair elections in Santa Clara.”

In her complaint, Mahan—who resigned from the City Council for health reasons last month—alleges that the city used taxpayer funds in 2018 to hire a political consultant to craft messaging in favor of Measure A, which, had it passed, would have changed Santa Clara’s election system from at-large to two council districts. 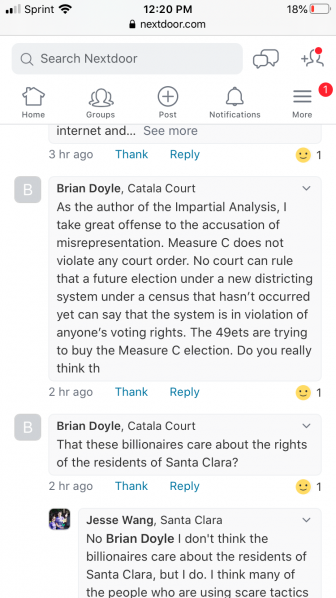 Pat Mahan included a screenshot of one of City Attorney Brian Doyle's exchanges on NextDoor as proof of his political advocacy.

More recently, according to Mahan, those same city officials have expended public time and money to support Measure C, which would create three council districts despite a 2018 court order to establish six. The March 3 ballot measure has ignited fierce opposition from Secretary of State Alex Padilla, the San Francisco 49ers and a coalition of civil rights groups that say it would violate the California Voting Rights Act.

“The mailers only outline what would happen if Measure C passed but do not acknowledge the outcome if the measure is rejected,” Mahan wrote. “A city’s informational pieces should not reflect any bias.”

Meanwhile, she goes on to allege, Doyle has been advocating for the measure during city business hours on NextDoor, where Mahan said he’s been “spreading misinformation.”

Haggag has been using some of the same tactics, according to Mahan, by using his official position to spread claims that “supposed ‘dark money’” is influencing the backlash to Measure C. “The No on Measure C campaign has been transparent about funding and has followed campaign finance law,” Mahan told the FPPC, “but the clerk has continued to use a false narrative to sway voters.”

The complaint ends with a plea from Mahan to investigate further. “Taxpayer funds are not a slush fund for elected officials to stay elected,” she said, “and it is becoming clear that Santa Clara’s leadership is using public funds for political reasons. To make matters worse, the city is going to great lengths to destroy evidence of their misconduct.”

Santa Clara city officials have yet to respond to requests for comment.