In 2012, San Jose announced a new public art initiative intended to make downtown look more like people’s expectations of Silicon Valley. Funded with a $600,000 grant from ArtPlace America, “Illuminating Downtown” tasked artists with literally lighting up the heart of the city by using a trove of donated LED lights from Philips Lumileds.

“Illuminating Downtown” went live a few years later with its first three pieces. Then-Seattle-based artist Dan Corson dressed two Highway 87 underpasses with interactive lighting. Called “Sensing YOU” and “Sensing WATER” by the artist, the one close to the SAP Center is unofficially known as the “blue doughnuts.”

“San Carlos Lantern Relay,” a series of eight 6-foot-tall, networked and interactive lamp posts made by locals Steve Durie and Bruce Gardner, can be activated by pedestrians at the touch of a button.

For their contribution to the light-themed art initiative, records show that Corson and his team made $657,000 from the city and another $100,000 from the San Jose Downtown Association. He would later relocate to Hawaii to open a boutique chocolate farm.

For their eight individual pieces, Durie and Gardner split $90,000.

According to the first analysis of the city’s public art projects by this news organization, that economic disparity is par for the course in San Jose. Not only does the city award the vast majority of its public art money to creatives without any apparent ties to San Jose, it also pays local artists far less on average than their out-of-town counterparts. 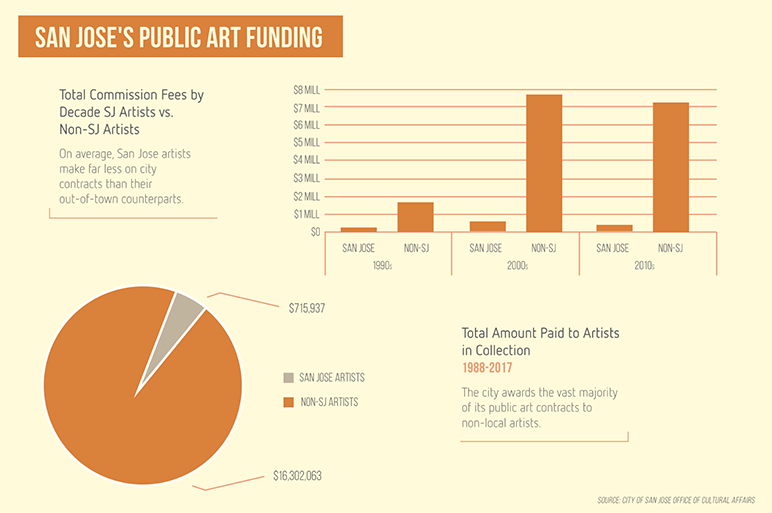 Since the late ’80s, San Jose has amassed an impressive array of public art. On its website, the city’s Office of Cultural Affairs (OCA) details 150 pieces in the collection, prefacing a database of the installations by saying, “We strive to celebrate the city’s diversity, innovative spirit [and] historic richness.”

But after a spate of high-profile public art contracts went to artists, musicians and designers from outside the city, local creatives began to wonder about the collection, and how well it actually represents the community.

Using the city’s website and publicly searchable contracts, San Jose Inside analyzed the collection by looking at the provenance of the artists and how much money each creative made per project. The numbers paint a story of a city that has failed to use its economic power to invest in its own art community.

In 30 years of commissions, from 1988 to 2017, the city entered into contracts with San Jose artists only about 15 percent of the time. Of the 150 pieces the OCA lists on its website, 127 were made by artists from outside the city.

In analyzing public art contracts for this piece, San Jose Inside defined San Jose artists as those with significant, demonstrable links to the city (San Jose State alumni, for example). Through that lens, it appears that the city hired San Jose artists just 15 percent of the time over the course of three decades.

Looking at the money spent on each piece, the disparity becomes even more pronounced. Of the $17.2 million the city spent on its public art collection in that same 30-year timeframe, only $715,937 reached San Jose artists—a mere 4.15 percent of the total.

On average, artists from outside the city received $134,710 for their projects. San Jose artists, by contrast, received on average $31,406.

No San Jose artist ranked in the top 10 highest payments. No artist from San Jose made it to even the top 20. It’s only at the 22nd spot that we see a San Jose artist show up, namely Tony May, who way back in 1998 took home $175,000 for his collection of ivy-covered arbors titled “Remembering Agriculture.”

“In terms of the numbers, that doesn’t sound good,” Durie says.

A professor at SJSU, Durie is among the relatively few San Jose makers represented in the city’s roster of publicly funded artists.

He and Gardner, who were the only San Jose artists to participate in the “Illuminating Downtown” project, divided that $90,000 among themselves and several part-timers who helped them execute their vision.

“We had a lot of people we had to hire in the design process,” Durie says. “At the request of the city, we had to hire an electrician to vet our design, and a mechanical engineer to vet how the lanterns were mounted to the poles.”

In addition, the artists also had to pay subcontractors to help with the fabrication. For his part, Durie says he has no qualms about what the city paid him, and that the size and complexity of a project should be kept in mind when determining compensation.

“Everything is commensurate on scale,” he says. “My question is not how much they got paid, but what was the nature of the project?”

Scale-wise, there’s a compelling case to make that Durie and Gardner’s work on “San Carlos St. Lantern Relay” was, in many ways, as complex as artist Corson’s work on “Sensing YOU” and “Sensing WATER.” In both cases, the artists had to hire extensive teams to help with fabrication. Both projects spanned multiple blocks downtown (two for “Sensing YOU” and “Sensing WATER,” and four for “San Carlos St. Lantern Relay”). Both were funded through the same ArtPlace America grant. 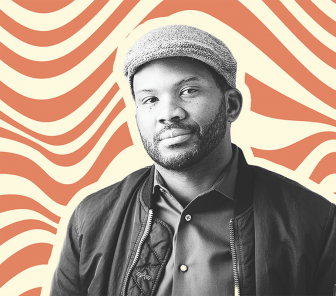 But while Durie and Gardner split a five-figure sum for their work, the Seattle-based Corson made more than five times what they did. That’s probably why Corson can spend his time these days farming cocoa pods in sunny Papaikou.

“The calls that we do for public art are open and competitive,” he contends. “There are ways you can restrict them locally, but when you restrict things locally, there tends to be intellectual inbreeding. It helps to add new flavor to that dialogue.”

Rather, the figures show that consistently over the past 30 years, the city did not prioritize hiring local creators—even as those artists increasingly struggled to keep up with Silicon Valley’s notoriously ascendant cost of living.

“If you think about the greatest cities in the world, New Orleans would never go out and get a musician from across the globe to represent their city,” says Demone Carter, a San Jose rapper, podcaster and artistic impresario. “It would seem ridiculous.”

As the head of the Multicultural Arts Leadership Institute (MALI), Carter is deeply ingrained in the South Bay arts scene. Through MALI, he’s made an effort to support the city’s multifarious art world, championing the work of local creators, from painters and pianists to folklorico dancers and DJs.

“I know that public art can be a complicated process,” he says, “but I really believe strongly that we do already have world class talent here in San Jose, and we have some work to do in how we support that talent.”

If the goal of art is to reveal, then what the city’s collection shows is that local artists have been under-hired, and underpaid, for at least a generation.