Santa Clara County Main Jail went on lockdown this morning after a fight broke out in the southern wing, authorities said.

One inmate was taken to Valley Med to get stitches, but has since been sent back to the jail. Two other inmates sustained bruises and bumps, according to Sheriff’s spokesman Sgt. James Jensen.

The brawl erupted just around 8am Tuesday on a second-floor dormitory in the jail’s south tower, Jensen said.

Correctional deputies used pepper spray to break it up. There were no cameras in the dorm, which Jensen said highlights the need for more surveillance behind bars. 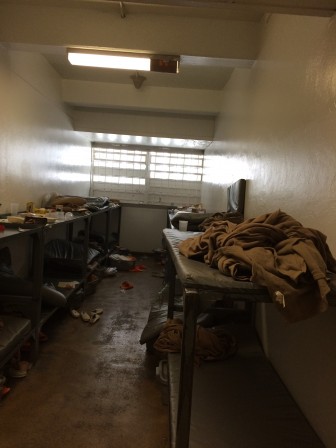 The dorm where Tuesday's fight occurred.

It’s unclear what started the outbreak, but Jensen said violence is common in both jails. Last year, he said, there were 225 fights reported in both Elmwood and the Main Jail; this year, there have been 78.

“This is not a rare incident,” Jensen said of Tuesday’s fight.

There has been an uptick in violence in local jails since California passed sweeping prison reforms in 2011, Jensen noted.

Under Gov. Jerry Brown’s realignment plan, thousands of felons who would normally serve their sentence in state prisons were reassigned to local jails. The reform required jails to house more inmates for longer periods of time.

Gang-related assaults in the South Bay’s two jails rose more than 280 percent from 2011 to 2013, according to the county. Inmate attacks on jail guards rose 20 percent during that same time, which jail officials credited to overcrowding.

But Sheriff Smith’s jails have come under scrutiny this past year after three of her correctional deputies allegedly murdered a mentally ill inmate. Michael Tyree’s fatal beating last summer spurred numerous reforms and put the county's correctional arm in the public eye.

A melee in in the Main Jail’s maximum-security 4A ward last month became center of a heated debate. Retired Superior Court judge LaDoris Cordell, who leads a jails reform commission created because of Tyree’s death, called the timing suspect.

The fight happened a week after a schedule change let more inmate out together and a day after Sheriff Smith made headlines for buying surveillance cameras for that unit on her personal credit cards.

But the sheriff, who was reimbursed for the purchase, dismissed the criticism and pointed out that jail fights are nothing out of the ordinary.