An individual or group claiming to be the hacktivist collective Anonymous has shut down all websites operated by Embarcadero Media Group, which runs several community newspapers that span from the Peninsula to the East Bay.

At 7:01am, a former media group employee posted a screenshot to Facebook showing what appears to be the Mountain View Voice’s website, but instead of news and links the only image is a person, backlit in a smoky room, wearing the grinning and mustachioed Guy Fawkes mask that has become synonymous with Anonymous. 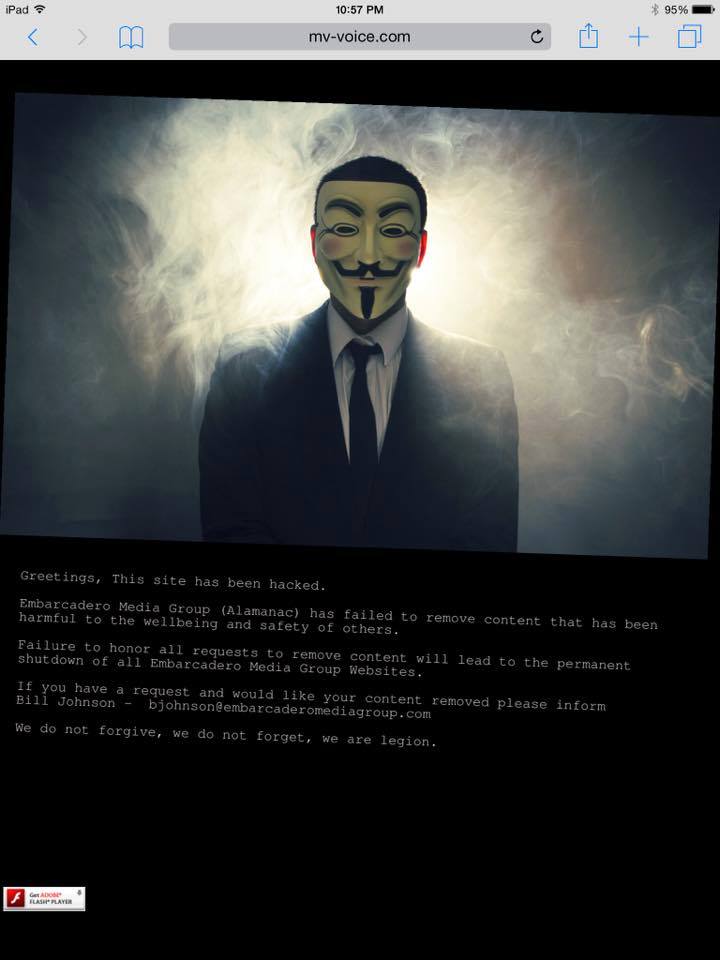 Below the picture of the masked individual, there is a message, which reads:

“Greetings, This site has been hacked.

“Embarcadero Media Group (Almanac) has failed to remove content that has been harmful to the wellbeing and safety of others.

“Failure to honor all requests to remove content will lead to the permanent shutdown of all Embarcadero Media Group Websites.”

The message then extolls readers to email the head of Embarcadero Media, Bill Johnson, with requests to remove offending content.

The picture that was posted this morning no longer appears on any of the Embarcadero Media websites (PaloAltoOnline.com, MV-Voice.com or AlmanacNews.com), after the company decided to take all of them offline.

Jocelyn Dong, editor of Palo Alto Weekly, confirmed that the websites were hacked at 10:30pm Thursday. The removed graphic on the websites stated that content from The Almanac sparked the cyberattack, but staff apparently has little clue what story or photos the message references.

“That’s kind of the baffling thing,” Dong said. “We don’t know if the statement about The Almanac is truly the cause or if they're just using that as a front for hacking in general.”

Dong said the media group’s IT department has been “working all night to figure out what happened,” while the newsroom is going about its work as usual Friday.

“We’re taking it seriously and have contacted the Palo Alto Police Department to investigate,” she said.

UPDATE: In an attempt to see if one of Embarcadero Media Group’s websites have come back online, a warning pop-up informs visitors to the site that their computer has been infected by a virus and to call a customer support phone number. San Jose Inside’s IT department has informed us that this is a phishing attack and people should not call the number. Below is a screenshot of what appeared. 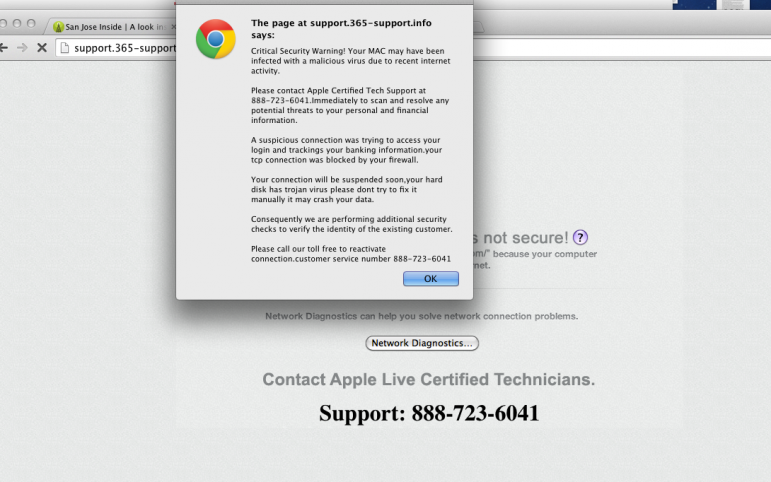 UPDATE II: Embarcadero Media Group's websites came back online Friday evening and the FBI have gotten involved in the investigation, according to Palo Alto Weekly's report. CEO Bill Johnson called the shutdown a “sophisticated and elaborate attack aimed at inflicting extensive damage.” He added, “Fortunately, numerous back-ups and safeguards, and a quick response by our IT team, were able to prevent even more serious harm to the company's operations.” Forbes journalist Parmy Olson was noted in the report as someone who has covered previous hacks by Anonymous. She suggested it was unlikely this came from the group, citing the lack of specific objections in the attack and the collective’s general rule not to go after the media.

Josh Koehn contributed to this report.