Counting resumed today, with an estimated 49% of the ballots -- more than 135,000 in the San Jose mayoral race-- remaining to be counted, according to elections officials. 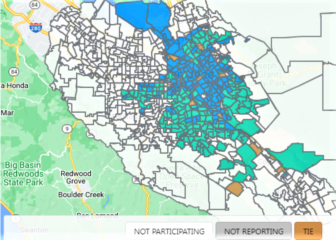 A precinct vote map posted by the elections office Wednesday showed that in the ballots counted, Chavez's strength was centered in downtown, central and north (Alviso) San Jose, with pro-Mahan precincts around the west (Willow Glen and west San Jose), south (Almaden) and east (Berryessa and Evergreen) sides of the city.

With mostly mail ballots outstanding, it remains to be seen whether that map of candidate strength will hold up, and whether vote-by-mail voters will tilt towards one candidate.

With nearly 132,000 votes counted in the race for mayor of the nation's 10th largest city, Mahan recorded 51.8% of the total, with 48.2% for Chavez, according to county elections officials. Approximately half the ballots remain to be counted, elections officials estimated today.

Mahan initially held a 3,000 vote lead, according to the first reports from the Santa Clara County Registrar of Voters, which slipped a bit as the counting progressed, then regained new momentum in the 11pm count. The final Election Day gap in the mayor's race stood at 3.5 percentage points.

San Jose has 524,451 registered voters, according to the California Secretary of State’s office. Previous turnouts in off-presidential election years have been as high as 70%, but this year's San Jose turnout is likely to be in the 50% range, according to elections officials.

Several polls in September and October showed the big-bucks battle between progressive Chavez and moderate Mahan was likely going to be close.