Core Development Vice President Christopher Neale confirms that “it was going to be a market rate project” and that it will now be mostly affordable because of the availability of county Measure A money and a desire to keep the project moving forward.

According to the project summary published by the county’s Office of Supportive Housing and Community Development on March 10, the Gateway Tower will consist of 220 below-market-rate apartments for households making between 30 percent to 80 percent of average median income.

Fifty-five of the units in what is now described as a 21-story highrise will be “set aside as permanent supportive housing for formerly homeless households, and 18 units will be set aside for rapid rehousing,” a form of temporary shelter for homeless persons with income who are seeking permanent housing.

The project developers, The Core Companies, have applied to receive 110 of the county’s allocation of project-based vouchers, by which the U.S. Department of Housing and Urban Development subsidizes monthly rents.

In addition, the project would receive $64 million from Measure A and another $13.75 million subsidy from the city of San Jose—bringing the public financing to $353,409 per affordable unit. The $64 million would be the biggest allocation of funds to date from the county bond measure passed in 2016 to build housing for the homeless.

Submitted to San Jose in 2015, the Gateway Tower project is described on its developer’s website as “a 24 story, 30-unit, luxury high-rise apartment building located in the SoFA district of downtown San Jose” that’s “designed to appeal to the Silicon Valley’s sophisticated renter.” “Gateway Tower will be the place to live in the South Bay to get that dynamic, urban-living experience,” the website adds.

The project site is located at South First, William and Market streets, just north of Parque de los Pobladores, which has been renovated with private and public funds.

A “bike kitchen” and 77 bicycle parking spaces would be provided, along with a “wide sidewalk area” that “could be used as an outdoor seating area for residents and commercial uses.” The project summary also says that “amenity spaces for residents would be provided on the sixth and 24th floors of the building” and that “the proposed units would range in size from approximately 470 square feet to 1,720 square feet.”

Neale said that while there may be some value engineering of appliances and finishes with the change from market rate to affordable, the exterior architecture won’t change and the two amenity decks will remain.

Downtown San Jose’s SoFA District has been awash in a wave of speculative buying.

The Valley Title parking lot was purchased in 2018 by a consortium led by Gary Dillabough for a reported $64 million and the former Bo Town restaurant site was purchased by a development group.

A lot across from the La Penita restaurant building, two blocks to the south, sold in March for $16.5 million—which pencils out to an eye-popping land cost of $1,896 a square foot—more than triple what other properties have sold for—according to RealtyTrac.

Another proposed SoFA district residential tower, a 30-story building designed by Campbell’s Anderson Architects, made the news earlier this month. It would create 354 affordable units near the corner of South Second and East Reed streets.

Gateway Tower has been controversial because it will demolish two century-old buildings in the low-slung SoFA neighborhood, including a local historic landmark where Charles Herrold, the first radio broadcaster, ran his pioneering wireless laboratory.

A draft environmental impact report stated in August  2016 that the tower “would overwhelm the historic buildings on and adjacent to the site in terms of size and massing” and “will result in an adverse environmental effect on a historic resource.”

“This impact will occur with the partial demolition of this significant resource, an action that will leave only the exterior storefronts intact. Proposed project components, such as including the preservation and rehabilitation of the storefront walls, and incorporation of a permanent window exhibit that commemorates Charles Herrold and his contributions to the development of broadcast radio, do not reduce the impacts to the historic resource to less than significant level,” the impact report continued.

“The project will also negate the potential of this property for listing on the National Register of Historic Places. ...The project is inconsistent with the Secretary of the Interior’s standards for the treatment of historic properties, and appears to be inconsistent with the Envision San Jose 2040 General Plan policies pertaining to the preservation of city landmarks.”

Despite the historical concerns, the City Council went ahead and approved the luxury highrise,  but the project has sat for several years while Core sought financing.

If the funding for Gateway Tower is approved, Core will become the largest recipient of Measure A funding, receiving $101.75 million between four projects—a quarter of the money budgeted to date. Neale says the number’s so large “because Gateway Tower is such a big project” and represents 60 percent of the funds earmarked for Core’s projects.

Core is also receiving Measure A funds to refinance and renovate two 17-year-old apartment complexes on Monterey Road south of downtown, and is in line to get $38.8 million in subsidies, $23.5 million of it from the county, to build the “Agrihood” affordable senior housing project in Santa Clara adjacent to Santana Row and the Westfield Valley Fair shopping center.

Core Development and its partner in two other projects, Republic Urban Properties, have generously contributed to the campaigns of Measure A’s two champions,  Supervisors Cindy Chavez and Dave Cortese, over the years. Most recently, in February 2020, Core principals David and Chris Neale gave $9,400 to Cortese’s campaign for state Senate.

On Tuesday, county supervisors reviewed the project list in hopes for moving Measure A projects forward. Less than half the proceeds from a $250 million bond sale have been spent, and just 146 units of affordable housing have been built since the $950 million homelessness-eradication bond measure was approved by voters in 2016. 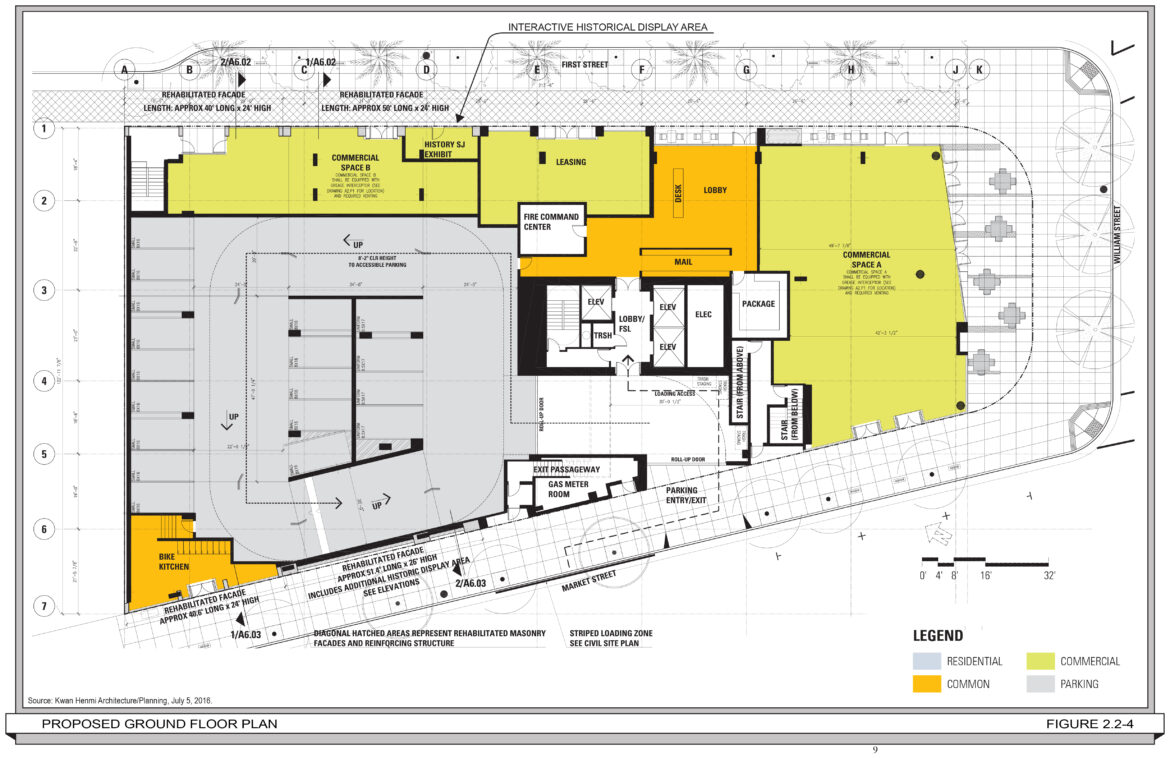 A floor plan of the proposed development.

This report is part of a longer look at Measure A which ran in Metro, “Billion Dollar Boondoggle.” Disclosure: Dan Pulcrano has operated a business on South First Street since before it was known as SoFA, and owns a building there. Some updates have been made to this post as additional facts became known.