About 15 people living on a dirt parking lot next to San Jose's largest homeless settlement received notices from the city Friday night warning them to clear out in time for a clean-up or face arrest.

"You are TRESPASSING and will be subject to CRIMINAL PROSECUTION if you remain," the flyer cautioned. "You MUST remove all of your property from this location by 7am on Monday."

Robert Aguirre, 60, felt panicked. He lived at "The Jungle," a sprawling encampment with 300-plus residents across from Happy Hollow Park, for 15 months, he said, and he's spent the last four months on the street-level side in a large yellow-trimmed tent pitched by shrubs and a wooden trestle.

"We worked our way up the hill," Aguirre said Sunday. "My wife's sick, so we had to move up. She couldn't go up and down that hill no more. Now where? Back down?"

Activists, philanthropists and homeless residents held a press conference Sunday to protest the city's short notice, as well as oppose a fence the city plans to build around the parking lot, the roadside entrance to The Jungle. They called the city's efforts an attempt to create "an internment camp" for San Jose's homeless.

By Monday morning, no city workers came to enforce the order taped on Aguirre's tent. The scheduled clean-up, apparently, was meant for the opposite side of The Jungle, on the other side of Coyote Creek. But Aguirre and other parking lot dwellers are still expected to pack up within the month, according to city officials.

Although a sweep didn't come Aguirre's way this week, the city acknowledges that it plans a large-scale clean-up for The Jungle sometime this fall, said Ray Bramson, the city's homeless response coordinator.

"The work going on at that site is part of a large, coordinated effort to house homeless individuals living in the encampment and restore the site to address multiple health and safety issue," he told San Jose Inside.

The goal is to clear the camp by the end of the year and house as many of these people as possible. But Aguirre told San Jose Inside he has a Section 8 voucher already—he just can't find a place to use it.

The fence and boulders slated to wrap around the parking lot leading to the camp will cost the city about $7,000, Bramson said. Perry Sandy, an affordable housing advocate, said he worries the fence will make it harder for volunteers to feed the homeless.

"This is where we come to help and build community," he said, gesturing toward the lot. "Building a fence feels punitive."

City officials say ministries and volunteers will have to ask permission to access the site once the barriers are in place.

For more about life in The Jungle, the Associated Press published this report last month: "Survival and Defeat in Silicon Valley Slum." 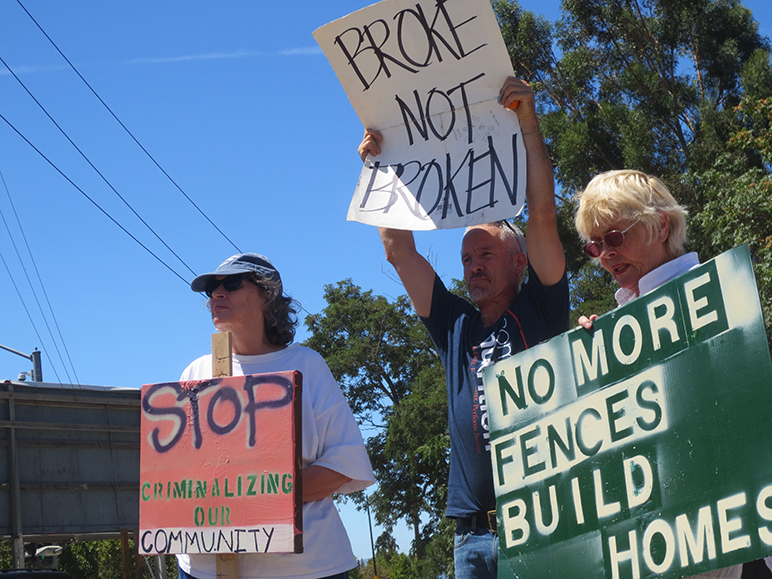