San Jose’s largest school district has been accused of sabotaging applications to open new charter academies. Teachers who expressed an interest in working at two proposed charters say San Jose Unified School District tried to poach them and invalidate their signatures of support.

“This is the first time we’ve seen actions like this taken by a district anywhere in the state,” says Brittany Parmley, spokeswoman for the California Charter Schools Association (CCSA). “We believe they’re trying to stall the start of the clock.”

To qualify a petition for a new charter school, its founders must prove “meaningful interest” by collecting signatures from parents of half the students that plan to enroll, or half the teachers they plan to hire. Alexandria LeeNatali—aspiring principal for one of the new schools, Perseverance Prep—opted to gather the names of teachers. But when she handed them over to San Jose Unified this past winter to verify interest, she says, officials tried to recruit the instructors for district schools.

“To be frank, I was shocked,” LeeNatali says.

In voicemail recordings she shared with San Jose Inside, the San Jose Teachers Union President Jennifer Thomas can be heard delivering what sound like pitches on behalf of the school district rather than verifying interest in working with the charter, Perseverance Prep, which was never mentioned.

“We’re in the middle of our recruitment season,” Thomas says in one message, according to call transcripts provided by LeeNatali. “I saw your resume and thought I would give you a ring to talk about what it’s like to work in San Jose Unified.”

Tempers flared at a May 4 SJUSD board meeting. 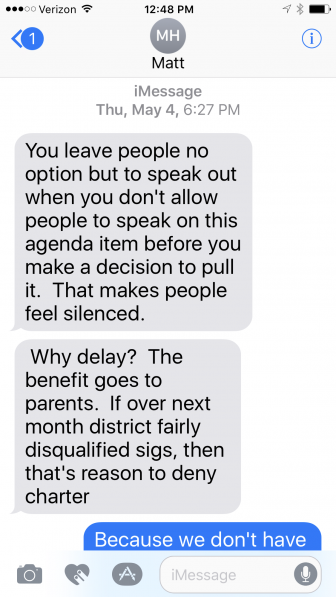 The district wanted to postpone the hearing until the petitioners submitted enough signatures to meet the state threshold. Charter proponents accused the district of stacking the deck against them.

Matt Hammer, who makes $225,000 a year to lobby for charters as CEO of nonprofit Innovate Public Schools, picked up his cellphone and fired off a series of terse text messages to district trustee Susan Ellenberg about a motion to put off the Promise Academy hearing for another month.

“You leave people no option but to speak out when you don’t allow people to speak on this agenda item before you pull it,” Hammer wrote, according to records obtained through a formal request. “That makes people feel silenced. Why the delay?”

Ellenberg texted back from the dais: “Because we don’t have 50% interest—we evidently aren’t allowed to accept that without that number of signs.”

“SJUSD has always granted a hearing without verifying sigs, like every district in the state,” Hammer replied. “McMahon is making up new interpretation. … And you aren’t letting ppl speak at mic. That seems to be significant violation of [Brown] act.”

“This is very distracting and inappropriate,” Ellenberg wrote. “Everyone gets to speak during public comment.”

McMahon, the district’s deputy superintendent, defended the verification checks, adding that the process honors the intent of the Charter Schools Act of 1992. Although other districts may go about it in other ways, he says, the state Education Code supports the district’s requirement. “Opening a school is difficult,” McMahon says. “We are holding petitioners accountable to the process of the law. It’s not that the process is difficult, it’s what is necessary to open a school the right way.”

Policymakers who backed the Charter Schools Act decades ago envisioned the new model working alongside public schools by offering something that traditional classrooms couldn’t offer. Charters receive public funds, but run like private businesses. Similar to nonprofits, they have non-elected governing boards and the freedom to experiment with curriculum due to fewer rules and a lack of labor unions. But critics say lax regulations and profit motive have fueled an industry that strays from the original vision.

Charter schools have become a major part of the national educational framework, with nearly three million children—6 percent of all public school students nationwide—enrolled. In Santa Clara County, the number of charters has skyrocketed in the past decade to 65—about a third of them approved by the county and the rest by districts. Statewide, charters have grown from fewer than 200 schools in 1998 to more than 1,200 serving 600,000 students, thanks to some $2.5 billion in public subsidies offered with no obligation to follow policy objectives.

“The results are, in turn, scattershot and haphazard,” University of Oregon education researcher Gordon Lafer wrote in a recent report by progressive think tank In the Public Interest. “Hundreds of millions of dollars are being spent each year without any meaningful strategy.”

The systemic tendency to give charter petitioners the benefit of the doubt has led to schools being opened in neighborhoods with no need for more classrooms, Lafer says. He found that 450 charters have opened in California school districts that already had enough space, an overproduction that cost taxpayers $111 million in rent, lease and mortgage payments, $135 million in bond debt and $425 million in private investments subsidized by tax breaks.

Lafer add that charters routinely fall short of their educational mandate. In California, 161 charters scored in the bottom 10th percentile of similar schools but continue to collect $44 million in lease payments, $57 million in general obligation bonds, $40 million in tax-credit investments and $85 million in conduit bond financing. The CCSA dismissed the Lafer report as one-sided, the product of a research group backed by charter-averse teacher unions. Preston Green III, a professor of educational leadership and law at the University of Connecticut, took his criticism of the burgeoning charter sector a step further, likening the industry to Enron and the subprime mortgage market.

“At first, I thought charters gave us an opportunity for innovation to level the playing field for students of color,” says Green, who has been studying and writing about charter schools for two decades. “But over time, I became very concerned that people were exploiting privatization to benefit themselves.”

The problem, he says, lies in the way states structure charter schools, which involves a byzantine network of private entities funded by public dollars. At best, charter school operators volunteer their financials and invite the public to board meetings. At their worst, the people running them get busted for fraud and self-dealing.

Magnolia Schools—a charter management organization that runs 11 campuses, including one in San Jose—made headlines for its dubious hiring practices. According to audits, the charter chain recruited teachers from Turkey and required them to shell out 40 percent of their salary to the parent organization or risk losing their visas. In January, another charter network, Celerity Educational Group, came under federal investigation after reports surfaced of the CEO using the enterprise as a personal piggy bank.

“People are right to be skeptical,” Green says.

Vera Sloan, a 34-year-old parent with two young daughters in San Jose Unified, says she supports high-performing charters schools. But she has serious concerns about the petitions being considered for Perseverance and Promise. LeeNatali has only been credentialed since 2016, which Sloan worries would make her far too inexperienced to found and run a school. She also expressed reservations about the proposed disciplinary system, which appears overly punitive.

Sloan hopes the district’s elected officials will exercise restraint and only approve charter petitions that add value. She views the upcoming decisions about Promise Academy and Perseverance Prep as a test for the newly elected members of the board.

“Charters have the flexibility to innovate in a way that most public schools cannot,” says Sloan, a community organizer and co-founder of local activist group Stand San Jose. “But we have to set a high standard and not approve each one that asks to open.”

McMahon agrees. If the SJUSD board approves a poorly managed charter school, taxpayers, parents and children are on the hook. Perseverance Prep comes up for a vote Thursday, while Promise Academy’s petition is slated for sometime in June. Click here to read the petition for Perseverance, and here for the one from Promise.

This article has been updated to reflect that the voicemail provided by Alexandria LeeNatali was from Jennifer Thomas.