At the far end of downtown San Jose’s SoFA District, where South First Street meets Market, a new experiment in luxury housing is underway. “Live Artfully,” advises the marketing website for a brand new seven-story, 232-unit apartment building known as The Pierce. After scrolling through images of young, multiethnic hypothetical tenants posing with aviator sunglasses, toy dogs or guitars, the sticker shock sets in: $2,615 to $4,485 a month, though that includes art and amenities.

If all goes according to plan with The Pierce and three other large market rate apartment projects planned for SoFA, a total of nearly 900 new high-end homes could be coming to the roughly eight-block area. Also on the horizon are earlier-stage proposals, like a massive set of twin towers on the old Valley Title site and the redevelopment of the former Emile's restaurant. It’s an appealing prospect for the recent crop of hospitality businesses that have opened nearby, like SoFA Market, the Continental, Tac-Oh! and several others in the works.

Where exactly that leaves the art galleries, nonprofits, nightclubs, design firms and small businesses that have lent the area its cultural currency through distinctive murals and frequent events, however, is unclear.

“We do see that our neighborhood is at risk of not truly being an arts district if people are priced out,” says Anjee Helstrup-Alvarez, executive director of Movimiento de Arte y Cultura Latino Americana, or MACLA. “It’s looking at how can you hustle?”

MACLA, the San Jose Museum of Quilts & Textiles, and the San Jose Institute of Contemporary Art have all managed to buy their otherwise prohibitively expensive buildings, though those transactions required years of drawn-out financial and political gymnastics. In the meantime, the downtown arts district saw the end of the experimental Zero1 Garage, and the city-owned building that houses contemporary gallery Anno Domini is also slated to go up for sale, according to records for the successor to the city’s now-defunct redevelopment agency.

During recent weeks, anxiety about how to contend with rising costs of both housing and studio space has also been compounded by the Ghost Ship warehouse fire in Oakland, which killed three dozen people at an arts collective—an event that some point to as a horrific reminder of how artists throughout the Bay Area find themselves increasingly pushed to the fringe.

In SoFA, developers, art groups, the city and local businesses all agree—at least in theory—that more should be done to support local art. Who will foot the bill for making that happen, though, is much more of an open question.

“These projects do bring funding to the community,” says Chris Neale, executive VP of SoFA-based developer Core Companies, which is behind two new housing proposals. “The question is: Is there a way that the arts could get supported through that?”

On the ground floor of a historic building smack in the middle of a growing corridor of reclaimed wood-heavy restaurants and bars, the 2-year-old SoFA Market is almost full.

By next year, all 11 spaces will be occupied by food and drink purveyors selling poke bowls, Vietnamese sandwiches, gelato bars and other novel fare. In neighboring storefronts, Minneapolis transplant Uproar Brewing is set to take over Zero1’s former space, and a group of past and present tech workers are planning to open a food and beer business accelerator called Forager in the old South First billiards hall.

All of their models depend on disposable income, which, according to SoFA Market manager Nate LeBlanc, doesn’t necessarily come from performing musicians or artists exhibiting work in nearby galleries. The district’s new tenants want white-collar creatives who might move into apartments planned for the neighborhood.

“We’re more for an architect who has $15 for a bowl of ramen,” says LeBlanc, a native of San Jose who also counts himself among devotees to the local DJ and art scenes.

Down the street, Neale of the Core Companies is banking on a similarly affluent segment of the creative class—or at least techies who can appreciate quality offline design. His firm has two big projects in the works: the four-story, 105-unit Sparq on a former Enterprise Rent-a-Car parking lot, and the 24-story, 300-unit Gateway Tower proposed to take over the end of the block extending from Heroes Martial Arts through Poly Cleaners II dry cleaning.

“The workforce of Silicon Valley—there’s a lot of creativity,” Neale says. “We’re looking for people who want to self-select to live in that environment.”

He expects units to go for prices on par with The Pierce and to include features designed to appeal to the loft crowd, like exposed utility lines. Construction could begin on Sparq as soon as this spring, Neale says, while Gateway Tower just secured initial permits this month and is currently being shopped for financing with a tentative goal to break ground in early 2018.

The city’s ceremonial ribbon-cutting scissors may be broken out again for another project on San Carlos Street, where developer Swenson and partner Amcal want to construct a 260-unit apartment complex in place of a boarded up former McDonald’s and the TechShop building next door.

In a slight twist on the model being employed by competitors nearby, Swenson is aiming to attract San Jose State University students before they get their first gigs in Silicon Valley. Building plans for The Graduate call for three-and four-bedroom units, where individual rooms will be rented for an estimated $1,000 apiece, penciling out to $3,000-4,000 per apartment.

Swenson sees a chance to replicate off-campus housing that has proved popular on the north side of downtown, says senior development director Josh Burroughs. Still, there would be no restrictions barring others from renting in the building, which is currently in the permitting process and targeted to begin leasing before the 2019 school year.

“From the city’s perspective, this is just a market-rate apartment project,” Burroughs says. “Personal preference if you want to live with 1,000 students.” 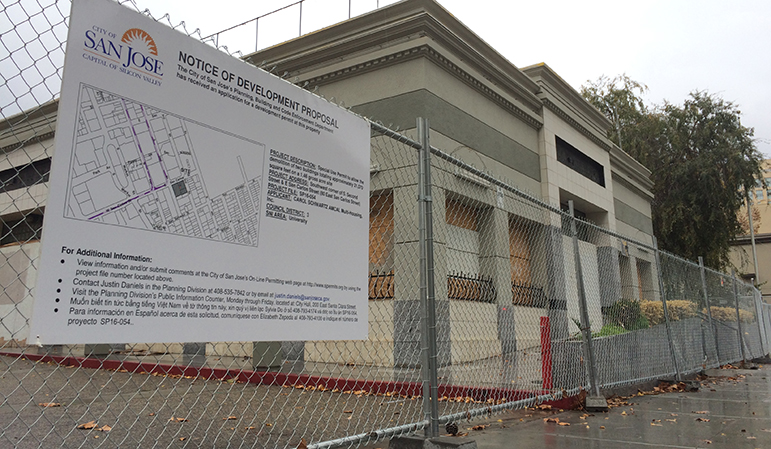 Site of The Graduate, a proposed student housing high-rise where individual rooms will be rented for about $1,000 apiece.

Landlords and new businesses aren’t the only ones excited about more people moving to SoFA, bolstering crowds that thin out after downtown office workers leave for the day. Art galleries and nonprofit groups, too, are open about the fact that they need more foot traffic to make up for Silicon Valley’s notorious dearth of arts benefactors.

“San Jose doesn’t have much grant support. There is not the philanthropic base in Silicon Valley to support arts organizations,” says Barbara Goldstein, the city’s former public art director, who now sits on the boards of several local arts groups. “We need a new model.”

One glimmer of hope is a new state art district designation, though what kind of financial support may be available won’t be clear until an initial pilot with 10-15 cities next year, says Jessica Cusick, a consultant on the program with the California Arts Council. To date, San Jose art groups have occasionally benefited from large federal grants, like a $200,000 National Endowment for the Arts award that MACLA secured in 2013.

Adding to uncertainty about government support is President-elect Donald Trump’s promise to slash federal social programs that support state and local efforts to bolster both the arts and affordable housing. On the latter front, private developers such as Core have previously built affordable housing designed for artists, like the Art Ark on South Fifth Street. Now, however, these developers say it’s not feasible to build in SoFA or elsewhere in San Jose due to a lack of government funding.

“We are actively looking to develop more affordable housing in San Jose,” Neale says. “The reality is it requires a lot of subsidy.”

That leaves people like Helstrup-Alvarez in a bind. She highlights one MACLA employee who recently quit after moving to Los Banos in search of affordable housing and quickly burned out from the 160-mile round trip commute.

While some Bay Area cities have more stringent policies requiring designated developer set-asides for the arts, or inclusionary policies that require affordable units to be built alongside market-rate apartments, that’s not the case with projects currently proposed for SoFA. Neale suggests redirecting existing fees for parks or other services to the arts if that’s what locals want, while champions of the arts have suggested more aggressive efforts to strike while the neighborhood is hot.

“On a certain level, I feel really optimistic because there are lots of small organizations popping up all the time,” Goldstein says. “The real issue is, are we going to be able to sustain it?”

Newcomers like The Pierce offer one potential path forward in the form of a more collaborative approach to planning. The project’s design team, led by longtime SoFA tenant Steinberg Architects, scaled back the size of the building on certain sides to better blend in with the scale of existing buildings—a give and take that gives arts advocates like Goldstein hope of replicating the model through neighborhood-specific design standards, or more regular meetings of the minds between developers and locals to help ease the shock of rapid growth.