It took decades for Joey Piscitelli to come forward with his story of abuse and another three years after that to take his accused rapist, Father Stephen Whelan, to court. But the Salesians of Don Bosco—the Catholic order that employed Whelan at a Bay Area all-boys high school where he was said to have assaulted Piscitelli from 1969 to 1971—treated the allegations as a joke.

In closing arguments during a 2006 jury trial, the Salesians compared Piscitelli to James Frey, the author who famously tried to pass off his novel A Million Little Pieces as a gritty addiction memoir. The defense produced a short video, which showed a mock book cover titled My Story of Abuse by Joey Piscitelli before flashing the word “fiction” in big, bold letters across the screen.

“They just made a mockery out of it,” Piscitelli, a 63-year-old East Bay resident, recalls. “Their lead attorney would laugh at me.”

Though he ultimately won two appeals and a $600,000 judgment, it wasn’t until a dozen years later—at 2pm on Sept. 26—that he felt a measure of vindication.

That was the day last month when high-ranking officials from California Attorney General Xavier Becerra’s office, in response to a Sept. 8 letter from Piscitelli, summoned him, two fellow Bay Area members of the Survivors Network of those Abused by Priests—known as SNAP—and two from bishop-accountability.org to a 20th-floor conference room in a secure building on Harrison Street in downtown Oakland.

Melanie Fontes Rainer, a special assistant and chief healthcare adviser to Becerra, and AG researcher Daniel Bertoni joined them at a long oval conference table along with a handful of investigators in expensive-looking suits. From a wide screen on the wall, about 10 other state agents teleconferenced in for the meeting.

Finally, he thought, a moment of reckoning would come. 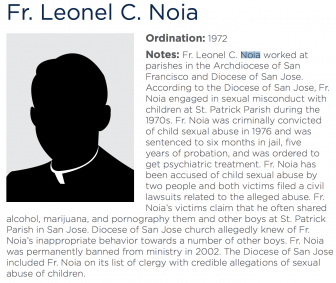 While individual priests have been charged with crimes by local police and some complicit superiors pushed into retirement by the powers that be, the U.S. government never probed the criminality of higher-ranking church leadership or organizational practices that exposed children to known abusers.

Now, it appears that Becerra’s agents are looking into similar problems in California, which houses the largest population of Catholic clergy and parishioners in the country.

Renewed public outrage and intense legal scrutiny prompted Catholic church officials to make an effort to come clean. When the San Jose Diocese last week released the names of 15 priests credibly accused of sexual misconduct and pedophilia, Bishop Patrick McGrath said the move marked the end of “a culture of secrecy in the church” and the start of an era of transparency and accountability.

Events over the ensuing days made McGrath’s gesture look like something else entirely—less a show of good faith than a cynical attempt to get ahead of a fast-developing story and an unprecedented multi-jurisdictional criminal probe into clergy abuse. 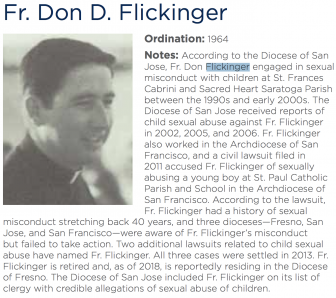 One of the priests cited in a new report on alleged child abusers enabled by the San Jose Diocese. (Source: andersonadvocates.com)

Most of the abuse alleged against the list of 15 priests took place decades ago, with the most recent case in the early 2000s. Only six of the named priests are still alive: Don Flickinger, Robert Gray, Angel Mariano, Alexander Larkin, Phil Sunseri and Hernan Toro. Seven had not previously been publicly identified as abusers. At least two—Toro, who’s in San Jose’s Main Jail on new molestation charges, and Leonel Noia—were reassigned to the ministry even after being criminally convicted of sex abuse.

It quickly became clear, however, that McGrath left a lot out.

The diocese failed to mention clergy accused of abusing adults, including Edward Burke and Charles Connor, who in 2002 admitted to molesting developmentally disabled men at the Sacred Heart Jesuit Center in Los Gatos, and William Farrington, who allegedly assaulted a Bellarmine College Preparatory School student decades prior. It also failed to name priests not directly authorized by the diocese, such as Society of St. Pius X priest Benedict Van der Putten, who allegedly molested a teen girl in 2000 at St. Aloysius Retreat House in Los Gatos.

On Sunday, the Mercury News published an exposé about an exorcist at Santa Clara’s Our Lady of Peace accused of sexually abusing a rape survivor from late 2011 through 2012. The priest, Rev. Gerardus Hauwert Jr., reportedly offered to help the victim when she went to confession seeking forgiveness for a trauma-induced sex addiction. 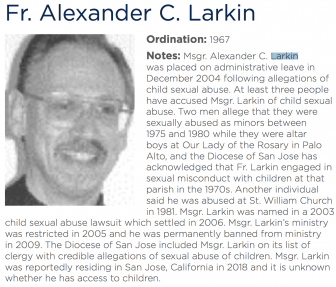 One of the priests who was shuffled around under the San Jose Diocese's so-called "geographic solution." (Source: andersonadvocates.com)

“The publicly available statistics suggest that the Bay Area dioceses, acting in coordination and in concert, subjected its parishioners to a public safety nightmare,” the Anderson report claims, calling the San Jose Diocese a “dumping ground” for “deviant priests.”

Historically, the Bay Area dioceses, like many of their counterparts throughout the state and around the nation, knew full well that priests endangered children and vulnerable adults but chose to keep their crimes secret, according to the Anderson report. Strict internal policies kept the scope of the problem hidden from the public throughout much of the 1980s and 1990s, despite government mandated reporting laws. 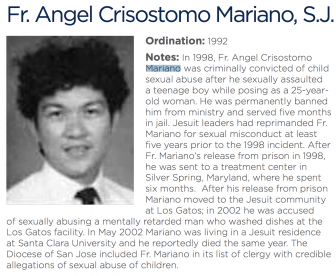 Angel Mariano was one of two South Bay priests who was reassigned to the ministry after being criminally convicted of sexual abuse. (Source: andersonadvocates.com)

In 2003, however, California’s Catholic church endured a flood of legal challenges after the state Legislature lifted the statute of limitations for just one year to give victims a chance to litigate old claims. For the first time, survivors of sexual abuse obtained access to internal church records through court orders.

Over the past 15 years, policymakers have resisted similar laws to extend the statute of limitations for abuse survivors. Gov. Jerry Brown, who trained to be a Jesuit priest, vetoed such a bill in 2013 and again this year, to the dismay of SNAP and other victim advocacy groups, including the National Center for Victims of Crime, the California Police Chiefs Association and the Consumer Attorneys of California.

Jeff Anderson, who represents sexual assault survivor Thomas Emens in a suit filed earlier this month in Los Angeles County Superior Court against all 12 of California’s Catholic bishops, including San Jose's McGrath, says the church continues to hide information about sexually abusive priests. The lawsuit claims that the bishops continue to engage in the “geographic solution,” that is, to move problem priests between and among dioceses without notifying the community.

That shuffling around makes it difficult to determine their whereabouts—even now.

“As far as I know,” Piscitelli says, “my abuser is still out there. And that’s a shame.”

Below is the letter that Piscitelli sent to the AG in early September, urging the office to look into the clergy abuse cover-ups.

I have been a child abuse victims advocate for 16 years. In light of the extensive publicity concerning Pennsylvania and other states grand jury investigations concerning clergy sex abuse by perpetrators in the Catholic Church, I would like to implore you to do the same in California.

I think it’s commendable that your own published California Department of Justice website, under the heading “Bureau of Childrens Justice—Mission Statement,” states that :

“...staffed with civil rights and criminal prosecutors, the bureau will focus its enforcement  and advocacy efforts on several areas, including:

“childhood trauma and exposure to violence.”

If ever there was a cause that was in need of your stated enforcement and advocacy effort, to investigate childhood trauma and exposure to violence—the systematic sex abuse crimes committed against children by the clergy of the Catholic Church is deserving of this promise.

As you may have been informed,  thousands of  children were traumatized and violated by clergy in the Catholic Church in California for decades. These crimes, which include rape, molestation, sodomy and many other abhorrent acts of sex abuse, were committed by perpetrators who were systematically sheltered, protected, hidden, shuffled and enabled for in California and other states for at least 75 years.

That stated, we respectfully rely upon you to initiate a long needed grand jury investigation to call attention, advocate, investigate and bring to light the severe sexual abuse travesties that have been criminally perpetrated upon our children by clergy of the Catholic Church for decades.

And to seek justice for the same.

The church should be held accountable, responsible, and remorseful for their reprehensible crimes upon innocent children, and this is certainly achievable and attainable by utilizing the California Department of “Justice” for just that—justice.

Here is just a small example of some of the numbers of victims of sexually abusive priests I have tracked in California. The clergy have been either/or: accused, admitted, sued, convicted in California:

There are over 515 sex abuser clergy named in California court documents today.

Although the total amount of clergy sex abuse victims in California will never be known exactly, it is estimated that is is well into the thousands -  and that is without the benefit of a grand jury investigation.

Approximately 1100 + victims have come forward to law enforcement, in lawsuits, and/or in allegations in California just in the last 15 years. Because only an estimated 10% of child abuse victims actually come forward, we can approximate that there are probably at least 10,000 victims who have been abused by clergy in California.

This staggering number should well support the much needed assistance of the Justice Department.

In addition, as I’m sure you know, the cost of health care, as a result of child abuse and it’s aftermath and collateral negative effects, is into the billions of dollars.

Thousands of clergy abuse victims, their families, their friends and supporters, and countless California residents, voters, and tens of thousands of people in the rest of the country and the world, await and expect the active support and participation of the California Justice Department.