The Buddhist monk—quiet, diminutive Master Thich Duc Huy—settled into San Jose’s Evergreen hillside amid a cluster of fruit trees and rows of white lion statues in August 2011. He moved into one portable and set up a temple in another, adorning the sloped lot just beyond the city proper with flags, shrines and tented canopies for religious assemblies.

Neighbors, who initially welcomed the newcomer, went on the offensive once the temple began drawing crowds to the 1.8-acre site. An influx of cars and the occasional tour bus began to arrive on weekends and holidays for temple services. The monk’s drumming and chanting, neighbors said, would echo across the cloistered hilltop community. Cafeteria-style vegetarian meals would draw upward of 100 people, with their attendant traffic, chatter and litter.

It wasn’t long before Santa Clara County, which requires permits for public assembly, began fielding complaints of a rogue monk in the east unincorporated hills. It took years of warnings, fines and ultimately—this past September—a court injunction to stop the gatherings and clear the site of illegal structures.

Now, the land lies empty except for a smattering of debris, a white statue, a rubber tire, an office chair and a few potted palms. Master Huy’s application to build a two-story, 7,000-square-foot temple won approval from the county Planning Commission last August. But the temple's record of legal violations prompted neighbors to appeal that decision, prolonging a bizarre and contentious land-use battle that pits a secluded corner of San Jose against a hermetic holy man and his flock. 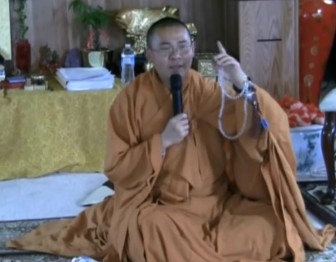 Opponents accuse Master Huy of witchcraft, adultery and even violence. They say the temple’s history of breaking the law and the monk’s alleged personal scandals should disqualify the project from county approval.

“This monk has done sexual escapades that would make Jimmy Swaggart blush,” says Mark Cao, who lives a short walk away from the temple and has become one of the Master Huy’s fiercest critics. “But more importantly, he has taken advantage of vulnerable people, financially and otherwise.”

Temple members, on the other hand, say they’ve been harassed and intimidated for mostly inadvertent violations of local zoning laws while their leader’s reputation has been smeared.

During one community meeting, which ended with police escorting out a couple detractors, the temple’s architect broke down in the middle of his presentation. Another time, according to Lu, a neighbor floored his Toyota Tundra back and forth by the property during a noise study to skew the results. The temple ordered a second evaluation, costing the nonprofit another several thousand dollars.

“I have been scared for my safety,” Lu says, wringing her hands. “We have been bullied many times.”

Temple members tried to avoid this, she says. They held an introductory meeting with the community upon Master Huy’s arrival to establish rapport. At first, people would wave at the monk, who would respond with a dimpled smile or a thumbs-up. But in a matter of months, tensions erupted in physical confrontations and simmered into mutual suspicion.

The dispute took a personal turn in early 2013. Some neighbors said they found a letter in their mailboxes penned in Vietnamese by a woman who claimed to be the monk’s estranged wife.

The letter’s author, Lan-Anh Tran, said the man they knew as Master Huy married her under his legal name, Tuan Van Nguyen. Indeed, a marriage certificate indicates that she married a Tuan Nguyen in February 2006. Two years after the nuptials, she continued, the monk lost his job at another temple—possibly because someone learned of his forbidden marriage.

In 2008, Master Huy went on to found the Canh Thai Temple, headquartered at the time out of a small home on Florence Way in central San Jose. It was around this time, the missive alleged, that he began secretly dating a young widow after providing funeral services for her husband.

“By the end of 2009 when [Master Huy] already obtained his green card and wanted to divorce me, he informed me he had fallen in love with another,” she wrote, according to a translation of her letter. “I was very disappointed and angry. I made big jealousy scenes at the temple, at [the widow’s] store and at her home in the hopes of getting back my lover, but [Master Huy] had no love left, so eventually, I had to accept the divorce.”

The day after Christmas in 2009, Tran said she went “to pick a jealousy fight” with the monk, who allegedly choked her and went to jail on a charge of domestic violence. Hoping to expose her husband as a hypocrite in violation of his purported asceticism, she asked the monk’s landlord to walk her through the home she once shared with him.

“I took the landlord to [Master Huy’s] room to witness: half-eaten meat pizza, an open bottle of Heineken, and a container of pornographic DVD’s,” she wrote. “I also retrieved intimate pictures of [the monk and his mistress] from his camera and later distributed them to the followers who had been supporting him … so they would know the hidden face of this lustful Master Thich Duc Huy.”

Records confirm that the San Jose Police Department dispatched officers to the same Florence Way address that night. “The suspect choked the victim’s throat with one hand and covered her mouth with the other to prevent her from screaming,” according to the police report. The District Attorney filed but dropped a charge of domestic battery against her ex-husband, whom she claims is the same Master Huy of the Canh Thai Temple.

Lu, who volunteered as treasurer soon after the temple’s founding, dismisses the allegations as character assassination. “Master Huy is very humble,” she says, visibly frustrated. “We are here to help the community, to help the elderly and to focus on getting a permanent place, a formal place to continue his work.”

Lu says she began to volunteer for the Canh Thai Temple seven years ago. Her 101-year-old grandfather died days before Chinese New Year, making it impossible to find a cleric to conduct his funeral services.

“Master Huy was already busy, but he did make the time to help my family,” she says. “I wanted to repay him for that kindness.”

Like Lu, Master Huy has tried to shrug off the rumors and declined comment on allegations raised about both his personal life and the temple’s land-use violations. As far as the court order and county fines, however, Lu says the whole ordeal has been a learning experience

“When we bought this piece of land, we did not know that there were so many regulations,” she admits. “We tried to do it right, but we are not experts." 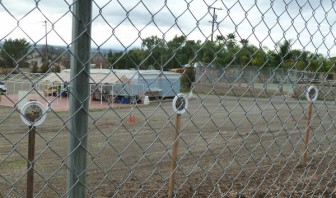 Neighbors said the Canh Thai Temple erected "magic" mirrors on the edge of the property. The temple said they were simply there to scare away birds of prey.

Opponents have raised these rumors at public meetings and invoked others in their 55-page appeal.

In what must have been one of the more peculiar Planning Commission hearings in recent memory, commissioner Kathy Schmidt on Aug. 27 asked Lu about a row of circular “magic mirrors with incantations written on them to conjure evil spirits” toward a neighbor’s home. Lu said the mirrors were placed not to put a hex on anyone, but to scare predatory birds away from kittens, chickens and the temple garden.

“So you’re trying to protect your vegetable garden?” Schmidt asked.

“And the kittens,” Lu replied, eliciting chuckles from the dais.

County Planning and Development director Kirk Girard shakes his head and smiles when asked about the supposedly magic mirrors and other outlandish hearsay.

“I do my best to tune that out,” he says. “I have to look at this project, at any project, with blinders on.”

He gives the temple’s critics credit for documenting the violations and making their case in a thorough appeal. But the rest, from a bureaucratic view, is a non-issue.

“The neighbors thought that this record of past violations, the fact that the temple continued to operate without a permit, was a character reference,” Girard explains. “But it’s not our job to make a character judgment. What we look for is whether the conditions of the permit have been met."

Reid Lerner, the temple's architect, says the opposition has been petty, xenophobic and anti-religious. When Lawrence Livermore National Laboratory hired him 20 years ago to design a $10 billion nuclear fusion facility, he says, the community pushback was firm but rational.

"Not so in this case," he says of the Canh Thai Temple. "In my 40 years as an architect, I have never see this level of anger over a project, and I don’t see it as being warranted."

Lerner says he often sees backlash on religious projects and expected at least some level of criticism. But he says his clients have a project that meets the letter of the law and includes nothing remotely controversial. Part of the reason the temple's members haven't fought back is because of their religious principles, he adds.

“These people aren’t trying to make money on this," Lerner says. "They just want to get together and pray.”

The appeal to overturn the Planning Commission’s approval of the Canh Thai Temple comes before the county Board of Supervisors on Feb. 9. Girard’s staff has recommended upholding the commission’s decision.