Where developers envision a future gravel mine, Valentin Lopez sees sacred ground. To the Amah Mutsun, an Ohlone nation that inhabited land spanning from the Peninsula and South Bay to the coast for thousands of years, the 317-acre site four miles south of Gilroy and just west of Highway 101 is called Juristac.

Mutsun lore casts Mount Umunhum as the birthplace of all creation and Juristac, which translates to “Place of the Big Head,” as the tribe’s holy land.

“To the Amah Mutsun, Juristac is as holy as Jerusalem,” says Lopez, the tribal chairman. “There can be no doubt that the proposed mining project would be the equivalent to tearing down Jerusalem to make way for a sand and gravel mining pit.”

In addition to four villages and hundreds of burial sites that date back 15,000 years, the grassy expanse of Juristac was where the tribe held sacred dances and ceremonies for millennia until Spanish settlers arrived. They disbanded the tribe and forced them to renounce their culture to work in the Franciscan missions. In the 19th century, a few hundred tribal members resettled in the area but were wiped out by a smallpox epidemic in 1862, according to tribal historians.

“That was the last time we had access to the site,” says Lopez, who draws parallels between the Sargent Ranch development and the 1,200-mile Dakota Access Pipeline that aims to carry fracked oil through indigenous land and water in the Midwest. “We’ve lost touch with our spiritual center for generations now.” 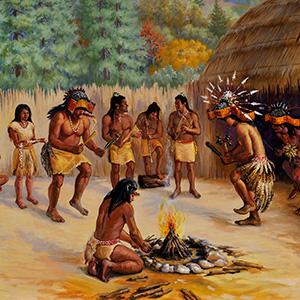 A mural by Ann Thiermann at UC Santa Cruz depicts life in an Amah Mutsun village before European conquest.

Lopez says the gravel mine proposed for the sprawling Sargent Ranch will hurt the environment and corrupt land that is sacred to the ancient tribe of coastal natives.

The land’s developer says he will do all he can to respect indigenous cultural sites. But the tribe continues to oppose the plan and is lobbying for “government-to-government” negotiations with Santa Clara County, the agency tasked with regulating and permitting the mining development.

“Mining will totally destroy the cultural and spiritual aspects of that land, so we are going to put up major opposition,” Lopez says. “We hope the city and folks there will support our tribe and recognize the humanity and spirituality of our people.”

Verne Freeman is the project applicant whose Palo Alto-based firm, Freeman Associates, represents the landowner, the Sargent Ranch Management Company. He says he hosted a tour of the site last summer for some Gilroy residents and will soon do the same for Lopez and other tribal members. Though it may slow things down, Freeman says the opposition will not derail the application, which was submitted last year on behalf of the more than 100 owners of the 6,400-acre ranch. The majority owner of the South County open space is Debt Acquisition Company of America, according to Freeman.

It’s not uncommon in the mining industry for companies to work with indigenous tribes to ensure that land and artifacts are safeguarded, although Freeman claims that an initial study of the proposed mining sites found nothing. The county ran into trouble this past August, however, when an archaeologist pointed out that planners allowed contractors to build solar panels over a confirmed Ohlone burial site west of Guadalupe Parkway.

According to San Jose State University professor Alan Leventhal, the county’s lapse in protocol by permitting solar panels to go up over a mound of indigenous remains and artifacts stems from planners only conducting a cursory review of historic records. Planners should have consulted the Northwest Information Center at Sonoma State University, he told the Mercury News in August, which keeps records of all indigenous archaeological sites in Northern California. The center also follows up with on-site surveys to dig for evidence, including bones, pestles, tools and baked clay.

It’s unclear whether local officials and the developer will take those precautions after the solar panel oversight exposed by a local journalist in August. But Freeman says he will meet with tribal members to understand more about their objections to the Sargent Ranch gravel mine and see if they can work through those concerns.

“We understand the tribe has history [on the land],” Freeman says. “Certainly, if anything was found we would consult with them and figure out what to do and even stop work if appropriate. We’ve done it in other projects in the state, and we would be open to that kind of arrangement going forward.”

Freeman’s firm specializes in helping mining companies with such projects, taking care of everything from designing the mining operation to securing government permits and approvals. The sand mining envisioned for the Sargent quarry would take place at three sites, with trucks hauling the dug-up aggregate onto Highway 101. Plans call for the project to occupy just over 300 acres, of which 220 would be to mine 38 million cubic yards, or 41 million tons, of sand and gravel for use in the construction industry. 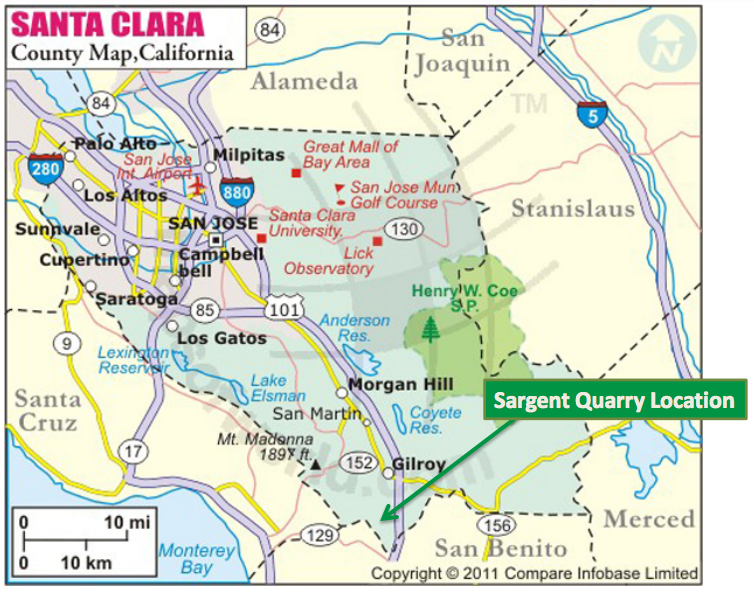 The operation would create 15 to 20 “good paying” jobs, according to the project description. Mitigation measures are proposed for plant and animal habitats, as well as protected and “special status” creatures, such as the tiger salamander, the burrowing owl and the American badger.

An adjoining property visible from Highway 101 has been the site of aggregate, or road gravel, mining in recent years and is now in the reclamation phase, according to Manira Sandhir, principal planner with the county Planning Department. Freeman’s father’s company started that operation, which is unrelated to the current proposal and was sold to Granite Construction, Freeman says.

The county received a letter from an attorney for the Amah Mutsun tribe, Sandhir says, and it will meet with Lopez to “get them involved in the project as early as possible.”

In a letter to the county dated Oct. 13, attorney Rovianne A. Leigh asked for “formal government-to-government” talks on the proposal and the right to monitor operations if the county approves the project. In addition to talks with Lopez, Freeman’s proposal is undergoing an initial environmental review, to be followed by a full impact report that could take up to a year, Sandhir says.

In October, the Amah Mutsun tribal council unanimously passed a resolution opposing the project, writing that it will “irreparably harm” tribal lands and water resources. Another part of the resolution invokes past injustices suffered by the tribe.

“The Amah Mutsun have survived slavery, disease and other genocidal practices of European governments that invaded their lands, as expressed in Catholic mission teachings, judicial decisions and official government practices,” the resolution reads.

The tribe has called on the county Board of Supervisors to acknowledge the difficult history of the California Indians, including how European settlers destroyed their native lands and customs. State law requires public agencies to consult with indigenous tribes before conducting an environmental review for planned development.

The Amah Mutsun, though not a federally recognized tribe, trace their ancestry back 800 generations in Santa Clara, Santa Cruz, San Mateo and San Benito counties. In 1851, California lawmakers blocked a treaty that would have restored ancestral lands to the Mutsun and numerous other coastal tribes.

“Our lands were stolen from us,” Lopez says, “and the current laws regarding land ownership and land use are artificial and immoral.” 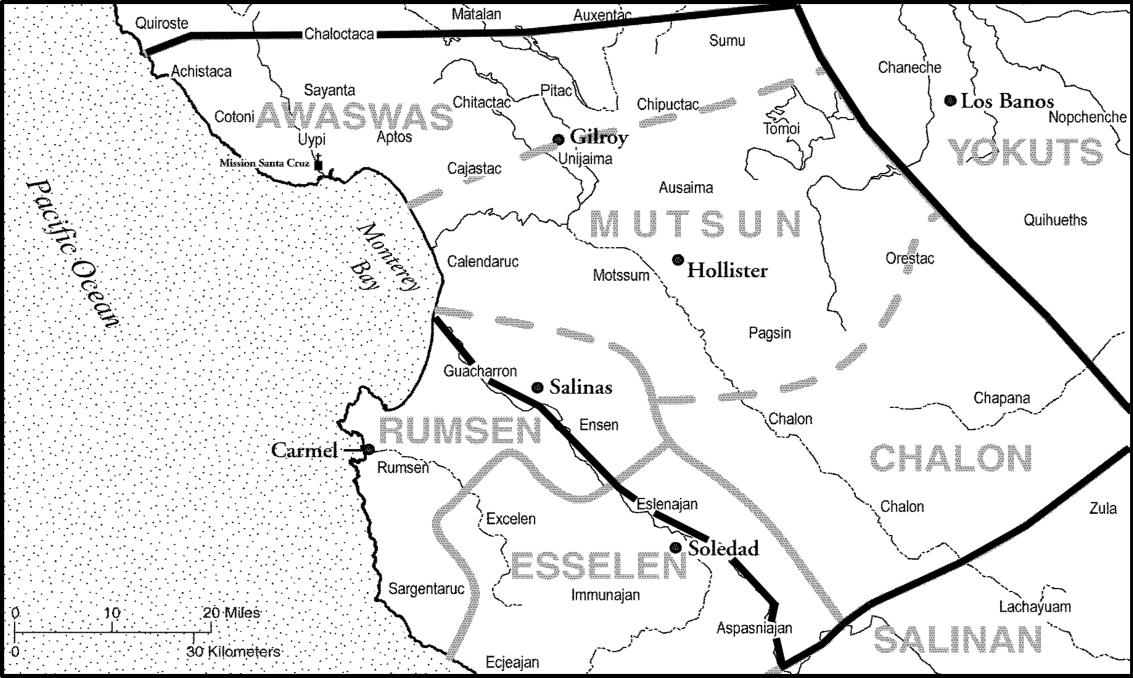 The lack of federal recognition reverberates to this day, making it difficult for the Amah Mutsun and scores of other tribes in California to negotiate and consult with developers and local governments. “The goal of the consultation would be to find mutually acceptable ways to protect and preserve the unique lands and resources within the Juristac for generations to come,” Lopez says.

In addition to the importance of the land to the Mutsun heritage, the tribe considers its members protectors of the land, Lopez explains, and one of their fears is that the gravel mining will remove landscape that percolates water into natural springs, keeping the lands thriving from season to season.

“That gravel is more than just rock,” Lopez says. “It allows those springs to live.”